You can easily clone GPT(UEFI) disk to smaller SSD to enjoy the advantage of GPT disk and gain high performance of SSD. The cloned SSD will remain bootable.

"I just installed a 500 GB SSD on my laptop and I'm wanting to move windows and my programs onto it. My laptop currently has a 1 TB GPT HDD with about 80% of it full so it won't all fit on the new drive. I do however have a 2TB external hard drive that can be used to store extra data on my old disk. So what is the best way to clone GPT disk to smaller SSD? Thank. "

You can easily clone GPT disk to smaller SSD as long as the used space of GPT disk is equal to or smaller than SSD disk size. If not, it is still possible if you can transfer files from SSD to HDD and free up space on GPT disk. Upon this, you will also need powerful and safe GPT disk cloning software.

Before we get to know more about cloning GPT disk to smaller SSD, you may want to have a brief understanding of GPT partition style. That may make you understand the following contents easier.

GPT stands for Globally Unique Identifier (GUID) Partition Table, which is a standard for the layout of the partition table on a physical hard disk. GPT is gradually replacing the old MBR (Master Boot Record) standard, which has some limitations that only support hard disks up to four primary partitions and 2TB in size. 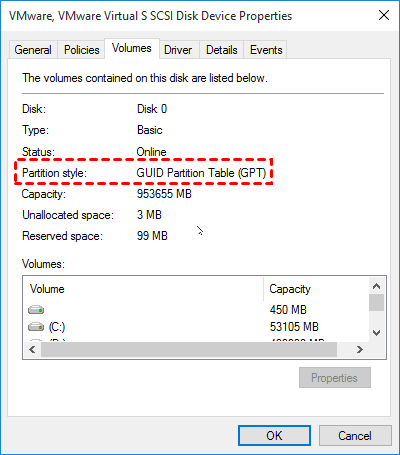 From above, you may have a basic understanding of GPT disk. Here we will continue to know more about the benefits of cloning GPT disk to smaller SSD.

However, considering the price, most of you may choose to get one smaller SSD (such as, 500GB SSD or 250GB SSD) and use SSD for OS and HDD for storage. So you can enjoy both high performance and large capacity.

Besides, the cloning method itself will include everything on the GPT disk, such as the operating system, system settings, and drivers, programs, data, etc. It saves you super time and effort without having to reinstall them.

To enjoy the advantages of GPT disk and SSD disk, you need powerful GPT & SSD cloning software like AOMEI Backupper Professional. It will take care of the cloning process well with the following features:

If you really can't clear out more space, try the System Clone feature to clone Windows 10 OS to smaller SSD . Hope it can help you.

Before cloning GPT disk to a smaller SSD, prepare the following things:

Step 1. Connect the smaller SSD to your computer. On the main page of AOMEI Backupper Professional, select "Clone" > "Disk Clone" in turn.

Step 2. Choose your GPT disk as the source disk to clone, and press "Next".

Step 3. Select the smaller SSD drive as the destination disk to save data from GPT HDD, then hit "Next". 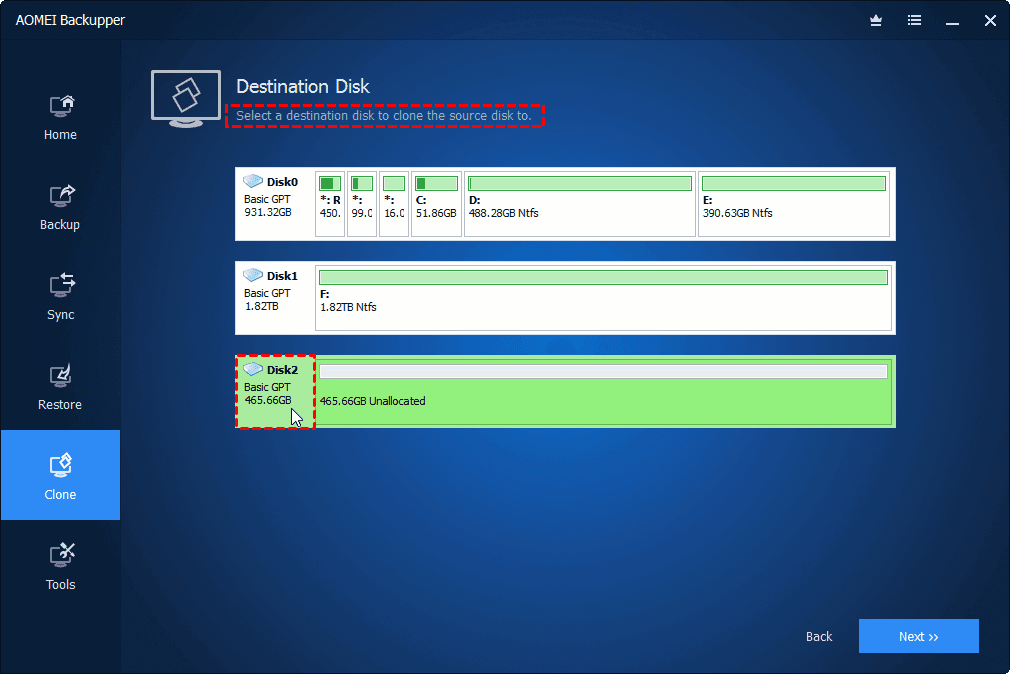 Step 4. Check "SSD Alignment" to accelerate the reading and writing speed of the smaller SSD, and click "Start Clone" to clone GPT(UEFI) HDD to smaller SSD.

✌ Helpful Tips:
Edit Partitions: It helps to convert MBR disk to GPT if you clone GPT disk to smaller SSD with MBR disk type. If you cloning disk to larger disk, it also helps adjust the partition size and location to fully use the target disk space.
SSD Alignment: It works only for SSD disks. For example, clone SSD to larger SSD.
Sector by sector clone: Just leave it unchecked. It will clone every sector on the GPT hard disk, whether it is used, blank or bad sectors, and cause system failure while cloning Windows 10 to smaller SSD.

Step 5. (Optional) when the cloning process completes, swap the GPT disk with the cloned SSD, or change the boot order to boot from the smaller SSD. Please make sure you're in UEFI boot mode, otherwise, you may not be able to boot successfully. You may want to know how to change Legacy to UEFI in BIOS.

The cost time will depend on the data size on GPT hard drive. Besides, this hard drive cloning software allows you to clone MBR to GPT disk or clone GPT to MBR disk without any issues.

★ The way to clone GPT disk to SSD free

Except for the direct clone method, AOMEI Backupper still supports a free way to transfer everything from GPT disk to a smaller SSD. Like the cloning method, it has an intelligent sector backup feature that only backup used sectors of the file system.

If the GPT disk usage is is equal to or smaller than smaller SSD, you can backup GPT disk to external hard drive and perform UEFI restore to smaller SSD. If your computer is not bootable, you can choose to create bootable media or recovery environment to boot it.

It's easy to clone GPT (UEFI) disk to smaller SSD as long as the SSD can hold all the data on the GPT disk. Powerful disk clone software - AOMEI Backupper Professional can deal with the cloning process well, whether the smaller SSD is GPT or MBR.

By default, it only clones used sectors from one hard drive to another one. And it supports 4k technology to boost SSD disk performance. For IT technicians, try AOMEI Backupper Technician or TechPlus edition. It even allows you to create a portable version of this software and perform GPT disk clone on any PC without installing it.