How to Clone Hard Drive with Different Size Accordingly?

Want to get rid of the destination disk sector size is not identical? Continue to see below and learn how to clone hard drive with different size.

“owing to some reasons, I cloned my1 TB hard drive to a new SSD. However, the cloned SSD has different size. And my drive only has 157GB used space. It makes me confused. Is there any way to clone hard drive of different size?”

Besides, some users still want to clone disk to larger disk. In a word, you need a powerful disk clone software, which can clone hard drive to both smaller SSD and larger HDD.

In general, your computer comes with a hard drive. However, with the increasingly files added and programs installed, your disk may be out of space and the computer runs slower and slower. In this case, you may want to replace HDD with SSD. Before that, you need to get the common issues of disk clone.

2. SSD disk is smaller than HDD in most situations. It's a little tricky for users to clone large HDD to smaller SSD, because there are a few disk cloning software can do that. Many users report that they only use a part of the space. Thus, you need a magic disk cloning software which can only clone the used space on the original hard drive.

How to clone hard drive to different size (easy and free)?

With AOMEI Backupper, you can clone hard drive with different sector size and get rid of the cloned hard drive shows wrong size too. But the disk needs to meet a requirement, that’s, the used space on the hard drive is smaller than or equal to target disk. If not, you can choose to clone OS partition only. To realize it, you need to upgrade to AOMEI Backupper Professional or AOMEI Backkupper Server.

Before you start to clone, you need to download free AOMEI Backupper and launch it.

Step 1. Connect SSD to the computer and make sure it can be recognized.

Note: This version only supports cloning disk with the same partition tyle, such as, cloning GPT disk to GPT disk. If you want to clone GPT disk to MBR or migrate MBR disk to GPT, you could consider upgrading to AOMEI Backupper Professional.

Step 3. Select the large hard drive as the source disk and click Next.

Step 4. Select the smaller SSD you plug in before as the destination disk and click Next.

1. Since the destination disk is an SSD, you should tick SSD Alignment. It can accelerate the reading and writing speed for SSD disks.

2. Please do not check Sector by sector clone. It requires that the size of the destination disk must be greater than or equal to the source disk.

Step 1. Plug 1TB HDD or SSD into your computer and ensure it can be detected.

Step 3. Select 500GB HDD as the source disk and click Next.

Step 4. Select 1TB HDD or SSD as the destination disk and click Next.

Note: In general, after cloning disk to larger disk, your destination disk will has unallocated space. This is a common problem for disk clone. Don't worry about it, Edit Partitions can help you out of the cloned hard drive different not right issue. But this feature is only supported on the paid version, such as, AOMEI Backupper Professional, AOMEI Backupper Workstation, etc. 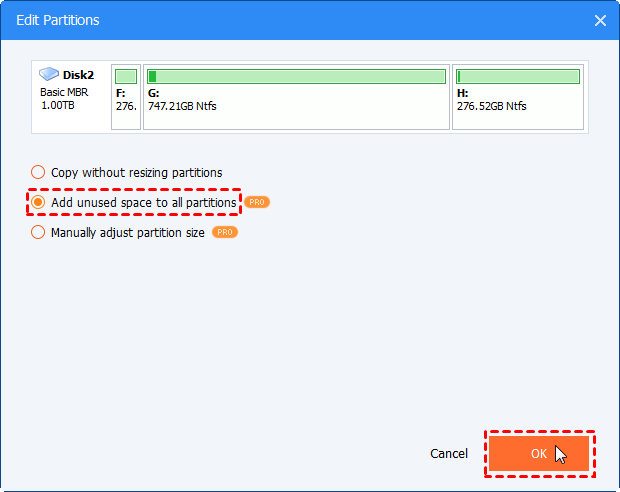 AOMEI Backupper is a great choice for you to clone hard drive with different size. You can use it to clone large HDD to smaller SSD if the used space is smaller than or equal to SSD disk. Even if your SSD disk cannot hold all the data on the hard drive, you still can choose to clone only operating system.

Also, you can use it to clone 500GB to 1TB HDD or SSD without the cloned hard drive different size not right issue. In brief, your disk will not show full capacity and an extra unallocated space remain after cloning disk to larger disk.

Download AOMEI Backupper and try it by yourself now!