Easiest Way to Clone an SSD to a Larger SSD in Windows 10, 11

If you are thinking about cloning SSD to SSD in Windows 10/11 without rebuilding the OS and reinstalling all the apps, read this article to find the easiest method.

As SSDs have become cheaper and more mainstream, more and more people are replacing their HDDs with SSDs or are upgrading their small SSDs to larger SSDs to increase their computer storage space. Here is one user’s experience:

How do I clone a small SSD to a larger SSD?

I want to clone my SSD (PNY) to a bigger Samsung SSD 850. So I installed their magician software but it doesn’t support my SSD. Now I see that I have a recovery partition on my SSD (447 MB). But I don’t know why it’s there. Can I get rid of this partition without causing problems? Anyone know any good program for cloning my SSD?

Why do we clone smaller SSD to larger SSD?

Cloning smaller SSD to larger SSD not only helps users get more space to store data but also speeds up their computers. Compared with transferring files from a smaller SSD to a larger SSD by copying and pasting, cloning an SSD using specialist software saves loads of time and effort.

Besides, the operating system and all the applications on the smaller SSD will be cloned across, so there’s no need for users to waste time in searching and reinstalling all their applications onto the larger SSD. As cloning smaller SSD to larger SSD has so many benefits, you may want to know how to clone your SSD to a larger SSD for free!

AOMEI Backupper Standard Edition, the best free SSD cloning software on the market, can help you upgrade to a larger SSD in Windows 11/10 effortlessly. Actually, it’s designed for all Windows PC operating systems. You can also use it to clone SSDs to larger SSDs in Windows 7, 8, etc. Following are the main features of AOMEI Backupper:

Wanna have a try? Learn the detailed steps of cloning smaller SSD to larger SSD in Windows 11/10 via AOMEI Backupper in the next part.

Bear in mind that the destination SSD will be overwritten during the cloning process. So if there’s important data on it, be sure to backup files beforehand. Let’s follow the instructions below to clone Windows 11/10 to a larger SSD:

Step 1. Connect the target SSD to your computer and make sure it is detected. Next, download and install AOMEI Backupper.

Step 2. Load up SSD cloning freeware AOMEI Backupper and click ‘Clone’ on the left side menu. From there, select the ‘Disk Clone’ option.

Note: If you only want to clone the OS to the destination SSD, you will need to upgrade to the professional edition of AOMEI Backupper and use the ‘System Clone’ feature. You can also clone a system disk from GPT to GPT, MBR to GPT or GPT to MBR with the Pro edition.

Step 3. Select the original SSD as the source disk and click ‘Next’.

Step 4. Select the larger SSD that you previously connected to your computer as the destination disk and click ‘Next’.

Step 5. (Optional) In the Operation Summary page, click on ‘Edit partitions’ and then choose the ‘Add unused space to all partitions’ option to make full use of the storage space on the larger SSD. This feature is available in higher editions of AOMEI Backupper. See edition comparison.

Note: If you tick the ‘Sector by sector clone’ option, AOMEI Backupper will clone every sector on the source SSD whether it contains any data or not. This will make the ‘Edit Partitions’ option unavailable.

Step 7. Click ‘Finish’ when the cloning process is complete. 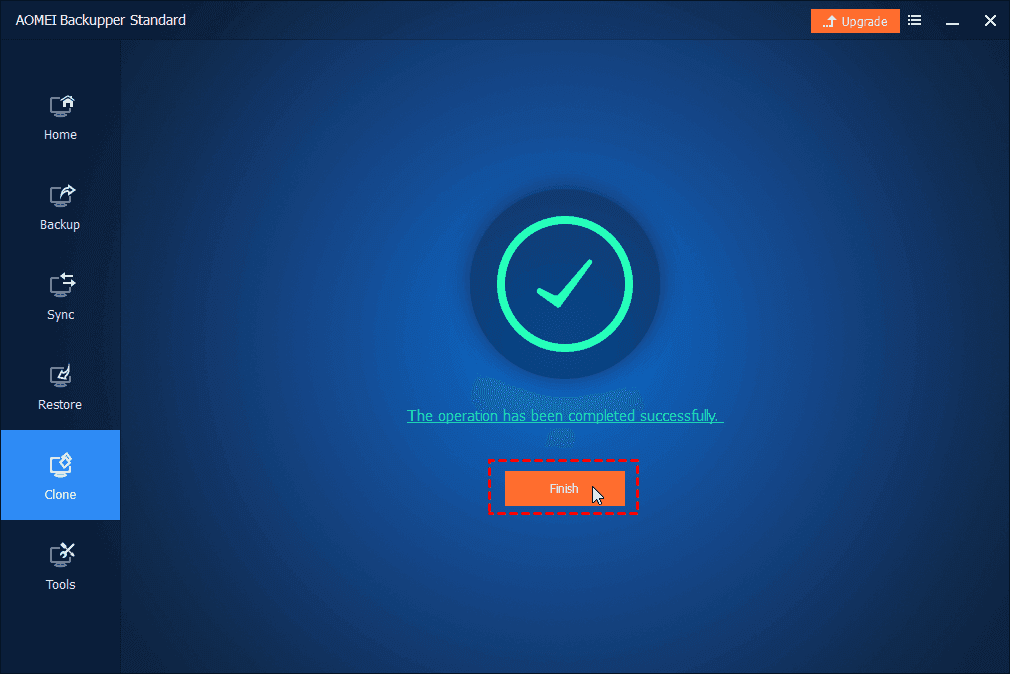 ★ How to boot from the cloned SSD?

Method 1: Replace the original SSD with the larger SSD and boot your computer.

Method 2: Set the new SSD as the first boot option in BIOS and boot your computer.

★ What to do if the cloned SSD won’t boot?

If you have set a proper boot order but your computer still fails to boot, you may try the following fixes:

Fix 2: Run Startup Repair from an installation disc to fix problems that keep Windows from loading.

AOMEI Backupper offers you the easiest way to clone an SSD to a larger SSD in Windows 11/10 and it is applicable to all kinds of SSDs, such as, clone Intel SSD to another, clone HDD to Seagate SSD, clone Windows 10 to NVMe SSD, etc.

As a matter of fact, it has many other fantastic features in addition to its SSD cloning function. It enables you to auto backup Windows 10 to WD My Cloud and it helps you to do DoD hard drive wipe. Go for it right now!