Dell XPS come with a small SSD which can't meet your storage need. Learn how to replace your Dell XPS with a larger SSD and then clone small SSD to it.

Dell XPS computers usually come with a 128GB or 256GB SSD inside. With the time going, the Dell XPS computer may get a very slow response due to not enough free space in system drive. It’s necessary to get more spare space. You may solve this problem by deleting some unnecessary files and uninstall some programs you don’t want to keep. But, you will soon get the same problem. What would you do? The best way to improve the performance of your Dell XPS computer is to replace Dell XPS SSD drive.

Perhaps your Dell XPS SSD is coming to damage. That is to say, you received a message by Microsoft Windows stating "Windows detected a hard drive problem. Backup your files immediately to prevent information loss". Then you should backup or clone Dell XPS SSD to larger SSD.

How to Clone Dell XPS SSD to SSD?

How to do Dell XPS SSD upgrade? In other words, how to clone SSD to larger SSD for Dell XPS? Before doing it, ensure you have prepared a larger SSD drive which should be M.2 type 2280.

In most cases, the SSD drive configured exclusive cloning software to clone data from HDD to SSD drive, check it on the SSD’s manufacturer website, or a CD/DVD comes with the SSD drive. These clone tool include Transcend SSD Scope, Samsung Data Migration software, and so on.

Nevertheless, many users stuck in these software cannot do this clone sometimes situation, how to bypass this problem? Use the third party cloning software to clone Dell XPS SSD to SSD drive.

The third party data migration software is more friendly and flexible to use. AOMEI Backupper Pro is the best cloning software, which allows you to clone SSD to SSD drive, clone only OS to SSD, as well as backup operations, like system backup, disk backup, file sync, etc. AOMEI Backupper fully supports Windows vista, XP, 7, 8, 8.1, 10. Please download AOMEI Backupper to have a try.

Steps to Clone SSD to Larger SSD for Dell XPS

Considering some laptops only one socket for hard drive, the cloning operation of connecting SSD drive with your laptop via USB port could be failed, or the computer won’t boot from SSD drive after cloning. So, the best way to do Dell XPS SSD upgrade is to backup the Dell XPS SSD to external hard disk or a USB drive, then Restore data to the larger SSD drive.

1. Install and run AOMEI Backupper. In the main window, click “Backup” at the left panel, then select “Disk Backup”. 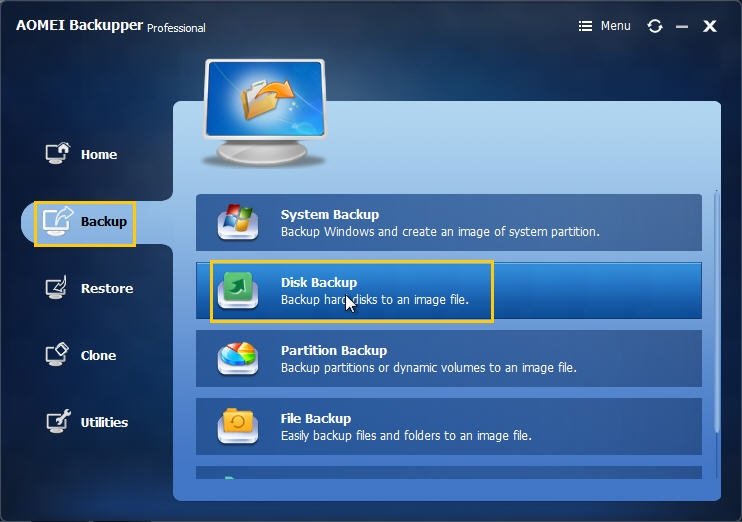 2. Enter a name in “Task Name” box. Then select Dell XPS SSD as source disk to backup in the “Step1”, then press “Add” to continue. 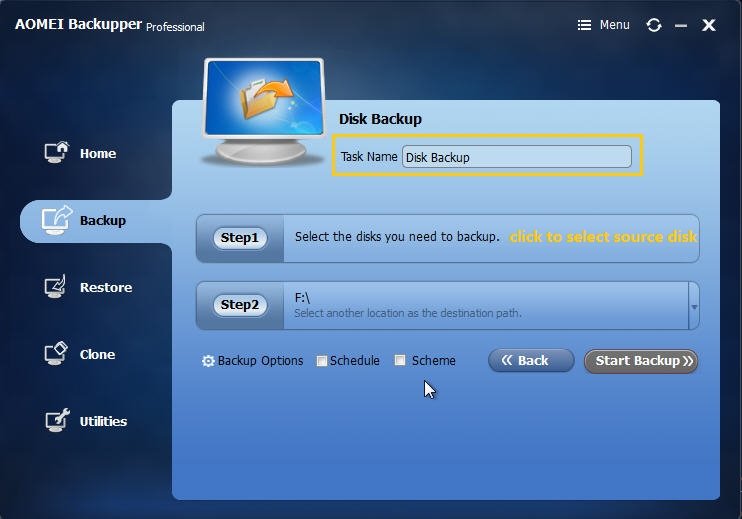 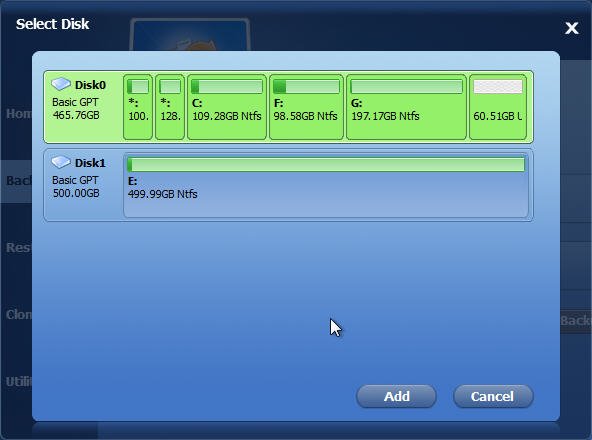 3. In the “Step2”, select a external hard drive as destination to save the SSD backup image file. You can also backup Dell XPS SSD to a USB drive, network share, NAS device, and so on. 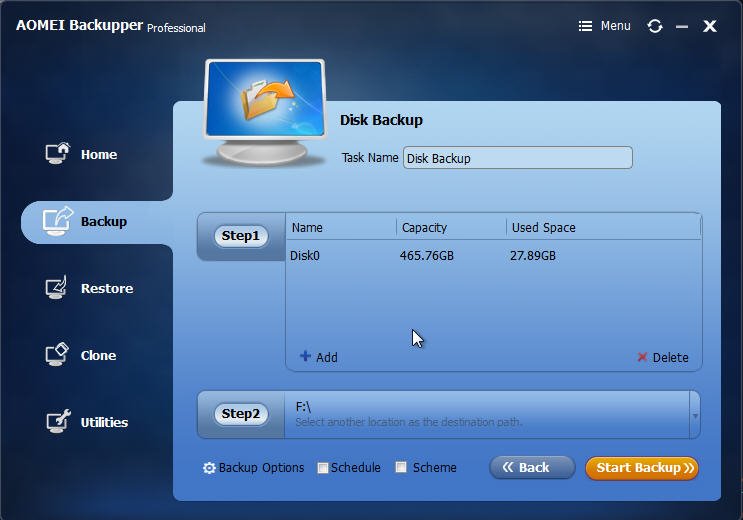 In order to restore to the larger SSD, you have to create a bootable media with AOMEI backupper. Unplug your original small SSD disk and plug the larger SSD drive into your computer, connect the bootable media with your Dell XPS, and boot the computer from it. Then connect the external hard drive with the image file into your computer’s USB port. Run AOMEI Backupper under WinPE environment. Following is the details about how to restore image to SSD drive: 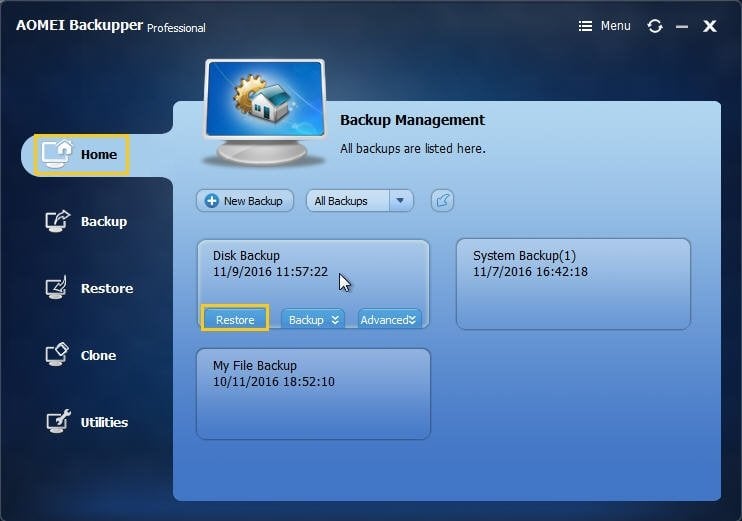 2. In next window, select a backup time point to restore. Then hit “Next>>”. 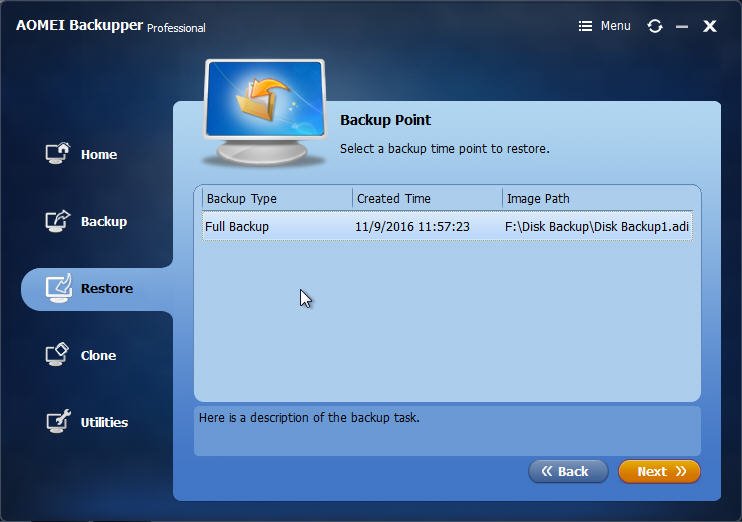 3. In the “Image Information” window, select the Dell XPS SSD disk from the image file, and then choose “Next>>”. 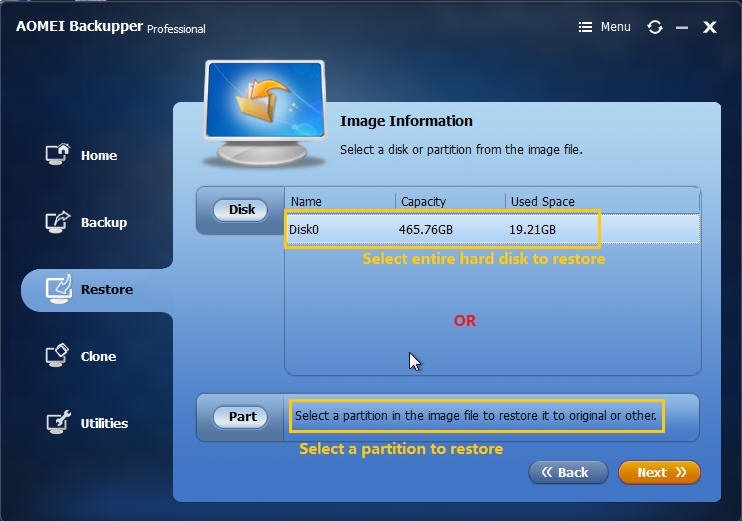 Tips: You can also restore the specialized partition by clicking “Part”.

4. In the “Disk Restore” interface, select the larger SSD drive as destination disk to save the data from image file. Then hit “Next”. In next window, click “Yes” to go on. 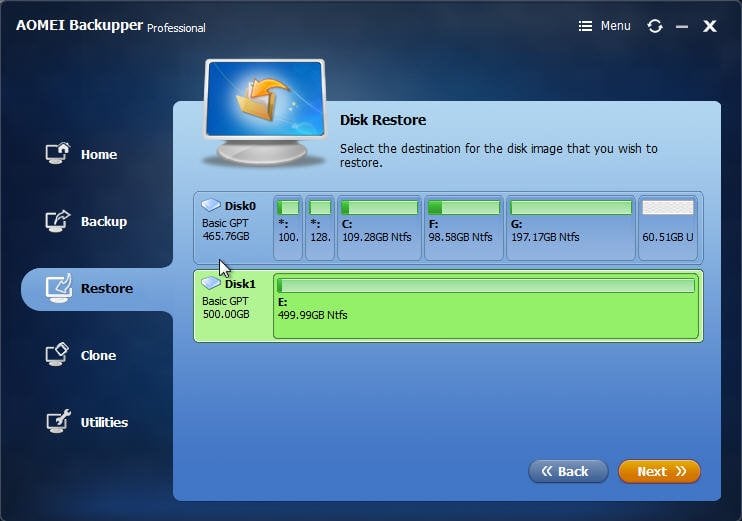 5. On the Operation Summary window, preview the operation of restoring, tick “Align partition to optimize for SSD”, and then hit “Start Restore>>”. 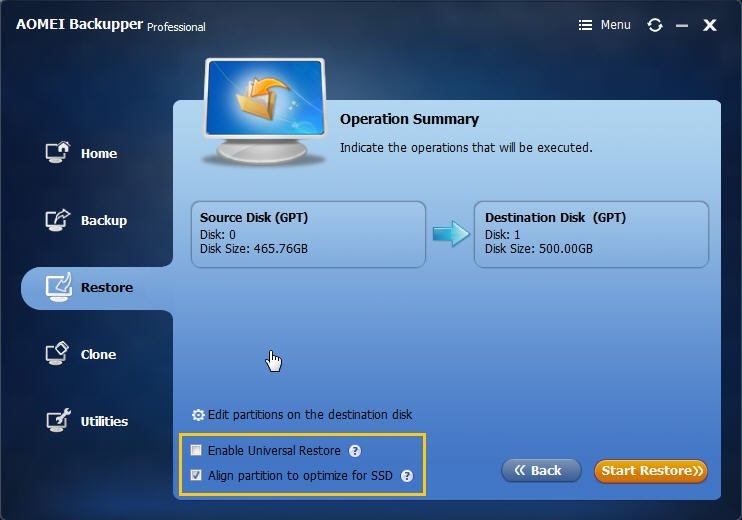 With the help of AOMEI Backupper, the Dell XPS SSD replacement has been achieved.