Full Guide to Replace HDD with SSD on Laptop in Windows 10, 11

You will learn the best practice to replace laptop HDD with SSD without reinstalling Windows 10 or 11, and one-stop wizard for hard drive replacement including video tutorials.

Can I replace laptop HDD with SSD?

"There are different types of SSDs, with different connectors, sizes, thickness, interfaces. I don’t know which kind of SSD could be used on my Laptop. Is it even possible to replace a hard drive with SSD in Windows 10 laptop without reinstalling Windows? Any suggestion will be appreciated!" 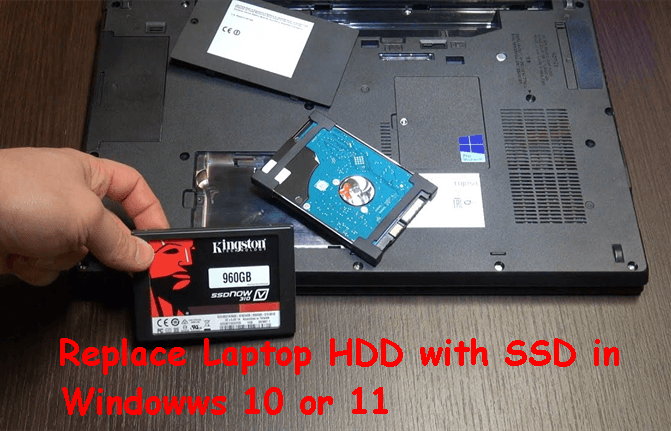 In fact, replacing laptop HDD with SSD is the best way to boost computer performance and you can actually do this as long as your computer has a removable panel (just like the above picture) and you can access your hard drive. If your laptop is an Ultrabook or it does not have this kind of easy access to a hard drive, you need to consult with your laptop manual for instructions to get access to the drive.

And there are many things to keep in mind, but you don't need to worry about much since I will introduce you one by one. Here is an overview:

Is it worth replacing HDD with an SSD in a laptop?

Changing a laptop HDD to an SSD, especially old laptop hard drive, will in most cases dramatically reduce the time to boot Windows, load programs, edit videos, play games, transfer large amount of files etc. Thus, it's worth doing so, and here are two main advanced advantages of using SSD as a laptop hard drive replacement.

Why replace hard drive in laptop without reinstalling Windows?

Speaking of putting an SSD in my laptop, in a large number of forums, you are advised to replace laptop hard drive with SSD and reinstall operating system. But the process is complicated and painful. 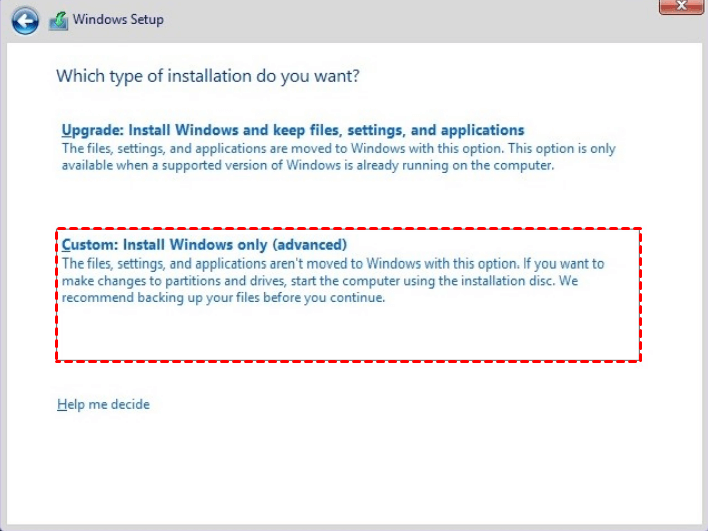 Is there any easy way to install SSD in laptop without reinstalling Windows? The answer is yes, you can choose to clone laptop hard drive to SSD in Windows 10 or 11 directly. And everything is kept in the new SSD as it was in the old drive such as the operating system, installed programs, files, configured settings, etc.

What you will use?

✔ An SSD with the right form factor, interface, and space to hold OS and data on the system partition.

✔ SSD connector. Since most laptop only has one slot, you cannot install SSD internally. So you can choose to clone HDD to SSD via USB to SATA Cable, adapter enclosure or M.2 to PCIe, depending on it's SATA SSD or M.2 PCIe SSD or NVMe SSD. Compared with USB 2.0 and 1.0, the USB 3.0 version has a faster transfer speed.

✔ A screwdriver. It helps to open laptop removable panel, take out old hard drive and install new SSD after cloning laptop HDD to SSD in Windows 10 or 11.

✔ Extra external device like HDD, SSD, or USB drive. Sometimes your new SSD is smaller than laptop hard drive, even for system partition, thus you need an external device to backup large files, photos, and videos, etc. Also, you can create a disk backup or system backup with it.

Prepare for hard drive in laptop

✔ Create a disk backup or system backup to avoid data loss or unexpected disaster. You can use Windows 10 backup utility or third-party backup software if you want to create a system image backup. But if you want to create a disk backup, try third-party backup software. We recommend you using AOMEI Backupper Professional, it's simple and easy to use. Please download it before using it.

✔ Transfer larger files, photos, videos etc to external device. The simplest way to transfer files from one hard drive to another is to copy and paste, and the time depends on the amount of your data.

✔ Clean disk to get more space. Except for larger files, photos, videos, you still can uninstall the programs no longer in use, or clean up temporary files or non-system files with Disk Cleanup tool. 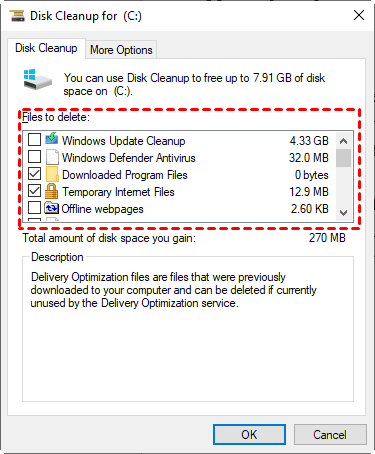 1. Physically connect new SSD. Put the SSD in the enclosure or connet it to the USB to SATA adapter or M.2 to PCIe adapter. And then, connect the other side to your laptop via USB cable. 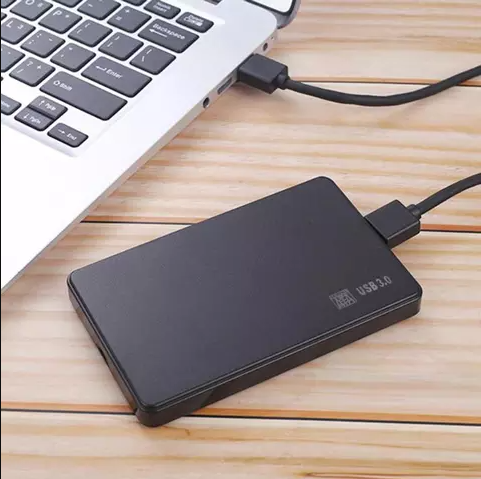 2. Initialize SSD for storage. Usually, the newly purchased SSD is not initialized and you cannot use it to store any data. To initialize it, go to disk management, then you will see a pop-up window asking you to initialize disk, select the disk and disk type (MBR or GPT) and click OK to start the initializing process. 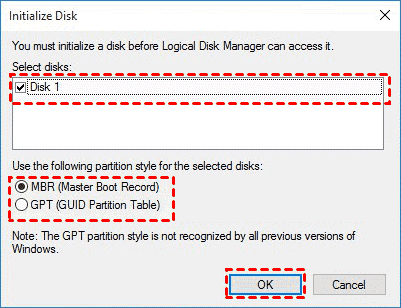 3. Check the BIOS settings for SSD compatibility. Restart your computer, press a sepecfic key to access BIOS and find SATA controller mode. And then be sure it uses a newer interface AHCI instead of the old IDE.

Besides the basic preparations, you still need the best disk cloning software - AOMEI Backupper Professional, which is the core of replacing old laptop HDD with SSD and ensure a secure boot in Windows 11/10/8/7/XP/Vista. And it also applies to replace HDD with SSD in desktop.  With it, you can:

After making preparations, you can download this software and start to replace old laptop HDD with SSD in the next part.

Stepwise guide to clone laptop HDD to SSD in Windows 10

Note that if your laptop computer is under the warranty, changing HDD to SSD is considered an unauthorized change, please take it into serious consideration. If not or you don't mind, you can then follow the steps below to clone HDD to SSD on laptop.  And it also works well in replacing HDD with SSD on desktop.

2. Download AOMEI Backupper Professional Edition, a specialist disk cloning software, then install and launch it. For server users, try AOMEI Backupper Server instead. In the main window, select "Clone" and then "Disk Clone"  in order.

Notes:
•  The Clone feature in the trial version can only be demonstrated. To clone laptop hard drive to SSD, whether it's MBR or GPT, please upgrade to the full version of AOMEI Backupper Professional.
• The MBR and GPT disk are both disk type for data storage, and you can check it in Disk Management.  Right-click the hard disk or the SSD, choose Properties -> Volume -> Partition Style, then you will see its partition style, either MBR or GPT.

3. Select the laptop HDD as the source disk, then click Next.

5. Check the operation summary and click "Start Clone" to clone hard drive to SSD in laptop with secure boot. Remember to tick "SSD Alignment" to increase the read and write speed of your SSD.

Notes ✎...
• "Sector by sector clone": This feature will clone all sectors of your old drive including the unused sectors to a larger HDD or SSD. If you clone laptop hard drive to smaller SSD with this feature, the cloning process will fail.
• "Edit Partitions": It allows you to make full use of disk space after cloning disk to larger disk, either manually add unused space to all partitions or let it fit on the target disk automatically. If the disk type of hard drive and SSD are different, you are able to convert MBR to GPT or vice versa. 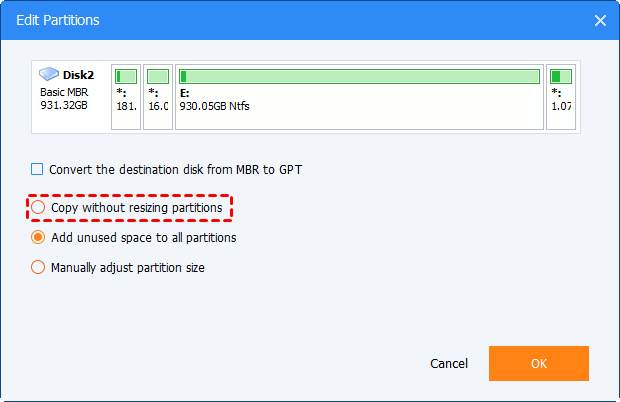 Is it over after cloning? No, you still need to check if your computer can boot from the cloned SSD successfully with content in the next part. Otherwise, you cannot use it to replace old hard drive in laptop when something bad happens. And after confirmation, you can choose to format HDD and use it for storage.

how to replace HDD with SSD in laptop

1. Prepare your laptop for hard drive swap. Turn off your computer completely, disconnect the power cable and any other cables, then remove the hard disk bay cover with a screwdriver.

2. Find the screws holding the hard drive into place and unscrew them. Keep the screws in a box so that you can find them easily and quickly later.

3. Lift your hard drive up about 35 or 45 degrees and pull it out of the drive bay.  Then, in its place, install the new SSD as if you were removing the HDD, but with the steps reversed. Please remember to secure it with the previously removed screws and replace the back panel.

4. Now, the new SSD is lying on your laptop, you can try to boot from it. Connect the power cable and all the other cables previously removed.

6. In the BIOS settings screen, go to the Boot tab and set the cloned SSD as the first option.

7. Save changes and let Windows boot from the new SSD. If your computer boot normally and all the programs and data are there (except much faster), you've done this operation successfully.

1. Does changing HDD to SSD make the laptop faster?

Due to the unique construction of SSDs, it does not have any removing parts. The biggest advantages of it are its excellent performance, and you can enjoy faster boot times, faster transfer speed, shorter loading time while playing games, etc.

2. Can I add SSD to my laptop without removing HDD?

In most cases, laptop only has one slot, so you can only connect one drive in the drive bay. But you can connect the HDD externally and use it to store files as you like.

To ensure your computer always runs smoothly, the SSD needs to be at least 256GB or 500GB since you may install many new programs or store various data in it.

For capacity, 1TB hard drive stores four times as much as a 256GB SSD. For performance, the SSDreads up to 10 times faster and writes up to 20 times faster than a hard drive. So, The question now is whether you need high capacity or super high performance the most.

5. Can I replace HDD with SSD without cloning?

If you don't want to clone laptop HDD to SSD, you can choose to backup laptop hard drive and save it to external devices, such as HDD or SSD, then restore disk image to new SSD. If your laptop is not bootable, please create a bootable USB to boot from it.

The process of replacing laptop HDD with SSD in Windows 10 or 11 is very simple as long as you follow the tutorial in this article. And you may find that your computer will run much faster after adding an SSD to a laptop, that's a brand-new experience. Moreover, its "SSD Alignment" makes full use of 4k alignment technology to achieve the best performance of SSD. Also, you can use it to replace HDD with SSD on desktop.

Except for cloning, you still can use the backup and restore method to achieve the same effect of upgrading HDD to SSD. It focuses more on long-term data protection since it allows you to backup disk automatically with different schedule settings. Besides, it still helps you delete old backups regularly to avoid backup disk full issues and perform dissimilar hardware restore if you want to use it on a new computer.