NAS is an ideal backup storage for Windows Server 2019, 2016, 2012, etc., but many people fail to select it as destination in Windows Server Backup. This post will show you how Windows Server backup to NAS successfully.

Why backup Windows Server 2019 to NAS

NAS (Network Attached Storage), also popular with companies, enables multiple clients to store and share files with fast data access and easy administration. If you are considering backing up Windows Server like 2019, NAS could be an ideal destination. It has following advantages in practical use:

Since there are so many benefits to backing up Windows Server to NAS, how to achieve it? Here I compiled 3 methods and hopefully one of them could suit your case.

Meanwhile, there are many reported errors when specifying NAS drives as destination. To perform Windows Server backup to NAS successfully, you could try creating a VHD or iSCSI Target on your NAS drive before backing up Windows Server, then select the created volume as the backup destination in Windows Server Backup. The steps are honestly quite complicated. You could refer to following tutorials with detailed screenshots.

>> Create a virtual hard disk and attach it to NAS

If you are not sure how to access and use the utility for image backup, please read Windows Server Backup guide.

If you are trying to perform Windows Server backup to Synology NAS, then Active Backup for Business could be backup solution for Windows physical server, PC, rsync/SMB file server, and VMware vSphere/Microsoft Hyper-V virtual machine. Here are 2 official tutorials about it:

As you can see from above, there are some must-do configurations before Windows Server 2019 backup to NAS, and different NAS may also have different scenarios. If you don't want to spend time on these steps, and prefer a direct solution with higher success rate, the following method may suit you better.

Easiest way to backup Windows Server to any NAS

AOMEI Backupper Server is a specialized backup & restore program for Windows Servers. It comes with complete features including backup/sync/clone, and supports a wide range of OS and storage devices. You can directly backup Windows Server 2019, 2022, 2016, etc. to NAS/network share/cloud or vice versa in several clicks. No more complicated operation.

And unlike Windows Server Backup, you can schedule incremental or differential backup to create and keep multiple backup images for an accurate restore. It also enables you to customize a scheme specifying how many backups to retain.

1. Make sure you can connect to your NAS, launch the software and select Backup > File Backup. You can also choose System Backup to protect the OS of Windows Server 2019.

2. Click Add Folder or Add File to select the data you want to backup. If you choose System Backup in last step, the operating system will be automatically selected.

Click on the funnel icon beside folder path, you can use Filter settings to customize the file inclusion or exclusion.

3. To make Windows Server backup to network share/NAS, click on the inverted triangle icon beside the destination box and choose Select a network location > Add Share or NAS Devices, enter the address to add it as target, then select a folder to receive the backup.

You can also add the path in Tools > Share/NAS Management. These Network locations could be invoked as source or target location. 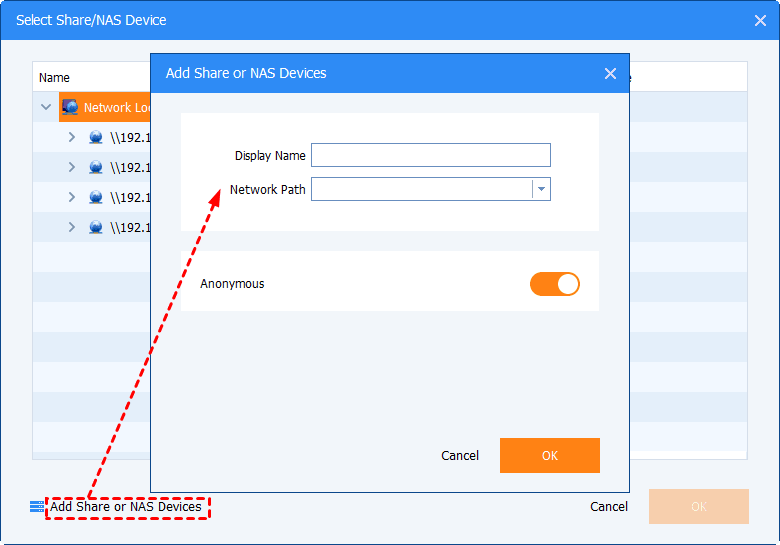 4. Before Start Backup, you can set up a Backup Schedule to perform automatic backup daily/weekly/monthly/event triggers/USB plug in. To save storage space in NAS, it’s also a good idea to create a cleanup scheme for obsolete backups auto deletion. 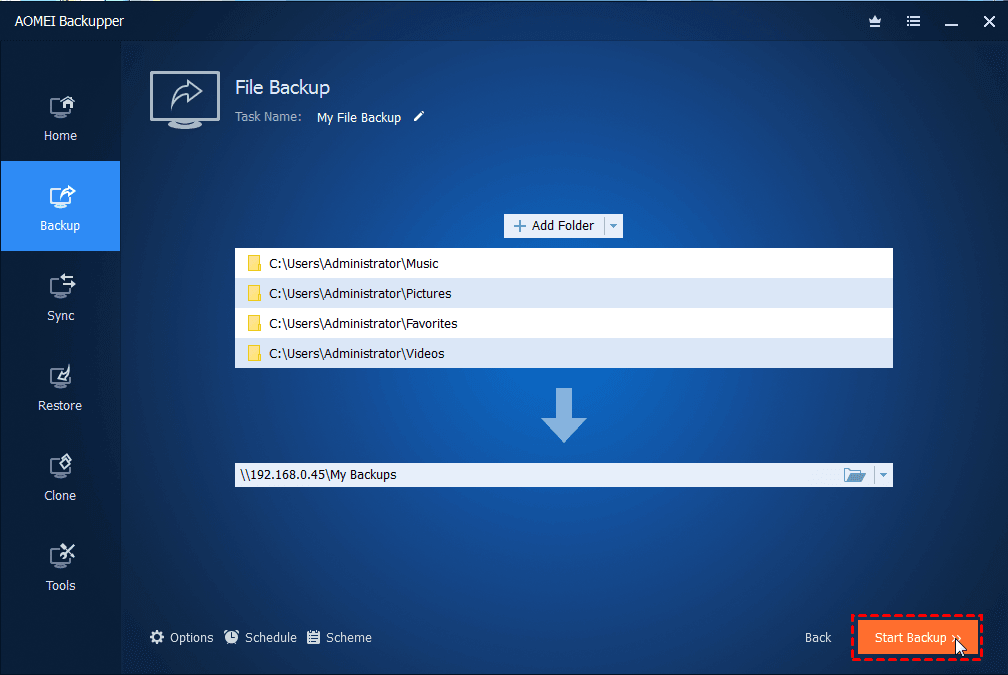 Besides backup, the restore function of AOMEI Backupper is also powerful, you can even perform Windows Server system restore to different hardware. And with the Clone feature, you are also allowed to migrate Windows Server to SSD without reinstalling.