What is Windows Server Backup? 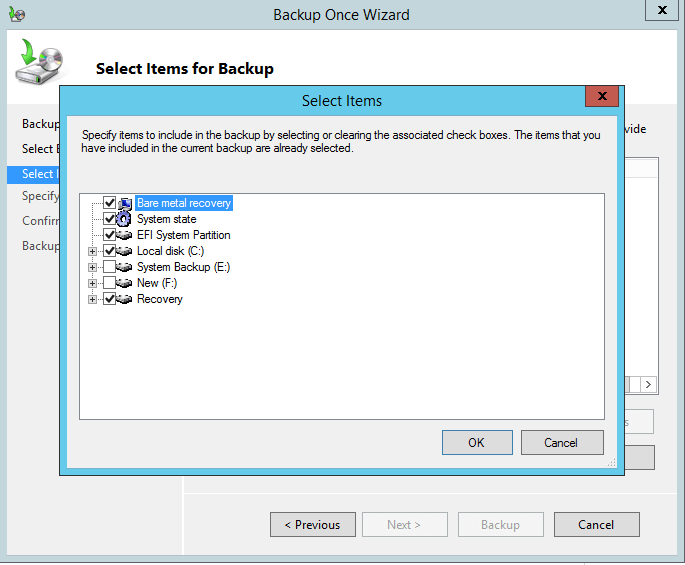 Although it provides a basic backup solution for Windows Server users especially for small business owners, you may be disappointed by its limitations sometimes. Therefore, you’d better figure out Windows Server Backup limitations before you rely on it to protect the system and all your precious data.

WSB owns the automatic disk space management feature. This feature deletes old backups automatically when it detects there is insufficient space for new backups. As a result, the number of backups kept by WSB is limited. Nevertheless, it will not shrink the storage space allocated for snapshots to less than 1/8 of target volume size, so you may find Windows Server Backup not deleting old backups sometimes.

You can’t write backups to tape using WSB. Moreover, you will need a separate, dedicated disk for running scheduled backups, not just a partition.

The Backup Schedule Wizard of WSB offers only two options: “Once a day” and “More than once a day”. If you want to perform Windows Server backup schedule weekly/monthly, you have to resort to Task Scheduler.

WSB offers neither the centralized monitoring ability for monitoring large numbers of servers nor the automated email reports about the backup status.

AOMEI Backupper Server, specialized backup software for server, can be the best Windows Server Backup alternative. It is embedded with multiple features to meet all your demands concerning server backups:

Now follow the steps below to schedule a system state backup and enable automatic disk space management via AOMEI Backupper:

Step 2. The required system partition(s) is (are) selected by default. Choose the destination path to store the backup files.

Step 4. In the Schedule window, click “Backup Scheme” from the left panel.

- Backup Method: you can choose to run full/incremental/differential backups.

- Enable Automatic Backup Cleanup: choose one cleanup rule from the drop-down menu. “By quantity”, “By time”, “By daily/weekly/monthly”, and “By space” are provided.

Notes:
◑ To get email reports about the backup status, you can go to Options > General > Email notification.
◑ You are allowed to restore Windows Server Backup to another computer with dissimilar hardware in AOMEI Backupper.
◑ For centralized server backup strategy, please turn to AOMEI Centralized Backupper.

✐Bonus tip: how to backup system to a recovery partition

Usually, after creating a system image backup, you will be asked to create a bootable media so as to boot computer when it fails. It is very useful in such case, but you can use an easier way to create both of them simultaneously - it's using one key recovery software AOMEI OneKey Recovery.

If you select the recommended backup option - "Backup system to AOMEI OneKey Recovery Partition", it will create a recovery partition but not specify a drive letter, thus greatly reducing the risk of mistaken deletion. Also, it adds a boot option to Windows Boot Manager and specifies a fast key to access it for system recovery.

Figuring out Windows Server Backup limitations can help you manage this tool better. If you are disappointed by all the limitations, you can use the best alternative AOMEI Backupper Server. AOMEI Backupper not only overcomes the shortcomings of WSB but also offers you more advanced functions. You can use it to clone hard drive on Server 2016 and create Server 2019 bootable USB. Go for AOMEI Backupper right now!