With Windows Server backup images, if something bad like hard disk failures or system crushes happens, you can run a Windows Server bare metal recovery to make everything back on track without worrying about data loss.

1. Under Actions tab, click Backup Once for a one time backup job, and click Next to continue. If you want to create a scheduled backup, click Backup Schedule instead.

4. Specify destination location to save the Windows Server 2016 system backup, you can choose the local drives or remote shared folder.

It will take a long while for the Windows Server image backup to complete. Once the backup is done, you have to specify the destination to another location because new backup will overwrite the previous one if you store the Windows Server 2016 system backup to NAS or network shared folder.

Powerful Windows Server backup software - AOMEI Backupper Server allows you to create system image backup for Windows Server 2016 with only a few mouse-clicking. It's a copy of your system partition, including the operating system, installed program, saved data, etc.

With its intuitive main interface, you can easily backup Windows Server 2016 like an expert. Please download and install the 30-day free trial and have a try.

Now, we will backup Windows Server 2016 to external hard drive, and here is the step-by-step guide:

1. Launch the Windows Server backup software - AOMEI Backupper, connect the external storage and make it can be detected.

3. Choose the external hard drive as the destination to save the Windows Server 2016 image backup.

★ Tip: The program will automatically select the system partitions by default.

4. Click Schedule to set up the backup intervals. Click Scheme to delete old images automatically when meet the requirements. Then, press Start Backup to create a system image backup for Windows Server 2016.

There are some details about Schedule, Scheme and Options before imaging Windows Server 2016:
1. Options allows you to comment on the backup task, encrypt, split and compress the server 2016 backup file, enable email or SMS notification, use VSS, etc.
2. Schedule provides you with five modes: Daily, Weekly, Monthly, Event triggers, USB plug in and three backup types: full, incremental and differential backup.
> Event triggers allows you trigger the backup task via the four events: User logon, User logoff, System startup, System shutdown.
> And the USB plug in is capable of backup Windows Server 2016 automatically when the related USB is plugged in.
> Incremental and differential backup will backup the changed part since the last incremental backup or full backup.
3. Scheme has the ability to automatically delete old backup images when the backups over the retain number that you specified before to avoid the backup disk full error. 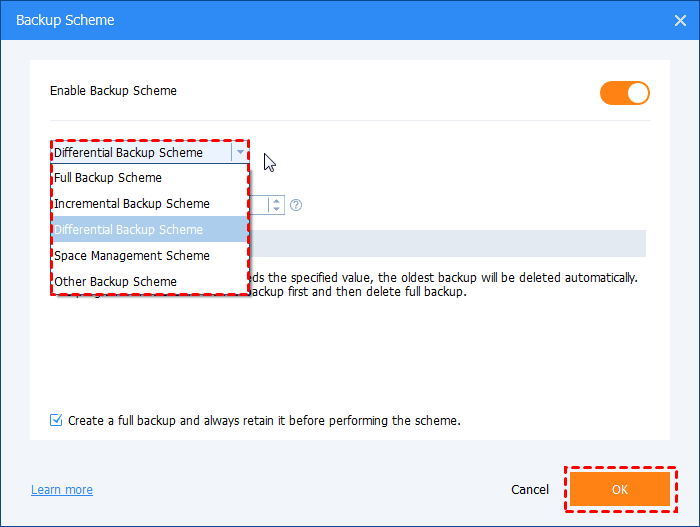 If you want one key system backup & recovery solution for Windows Server 2019/2016/2012, etc., specialized onekey recovery software - AOMEI OneKey Recovery can meet your demand. It enables you to create a custom recovery partition to save the image file, and you can launch the system restore process by pressing "F11" or "A" during computer startup.

In a short while, AOMEI Backupper will create a system image backup in Windows Server 2016 for you. Once the backup task is finished, you can use it to restore to dissimilar hardware or identical hardware Server. With the ability to create bootable rescue media or AOMEI PXE Tool, you can easily restore system state backup for Windows Server 2016 even when it is unable to boot.