How to Create Restore Point in Windows Server 2008 (R2)

If you are looking for a quick way to capture a snapshot of your computer, please continue to read this article and learn 2 effective ways to create restore point in Windows Server 2008 R2.

Can I create restore point in Windows Server 2008 (R2)

Restore point is a snapshot of your Windows system files, program files, registry settings, and hardware drivers. It is included in Windows Client OS like Windows 10/8/7, and can be used to perform a system restore - undo changes you made and restore the computer to previous date. But can you create a restore point in Windows Server 2008 (R2) and other newer OS?

What a Windows Server 2008 (R2) restore point should include

System restore point in Windows Server 2008 (R2) refers to the System State backup, which is a copy of all related information of your operating system and configurations. According to Microsoft, a System State backup includes the following things.

Then, keep reading below and learn how to create system state backup in Windows Server 2008 (R2).

As mentioned earlier, there are two ways to help you create Windows Server 2008 (R2) restore point, namely using Windows Server Backup and Wbadmin command line utility. For professional, it's suggested to use command line, since it's more flexible.

Here you will use Windows Server Backup,  a fantastic built-in backup and restore software in server-based operating system, to create system restore point in Windows 2008 (R2).

Please note that this software is not installed by default, thus you need to manually install it using Server Manager. Also, it only backs up the volumes formatted with NTFS file system. It only supports entire drive, dedicated volume or network share instead of a folder in the local drive.

Then, without further ado, let’s get started to create a system state backup right now with the following steps.

Step 1. Click Start > Administrative Tools > Windows Server Backup subsequently, then you will enter the main page of it. Click Backup Once... under the Actions tab. If you want to create system state backup regularly, you can choose Backup Schedule…option. 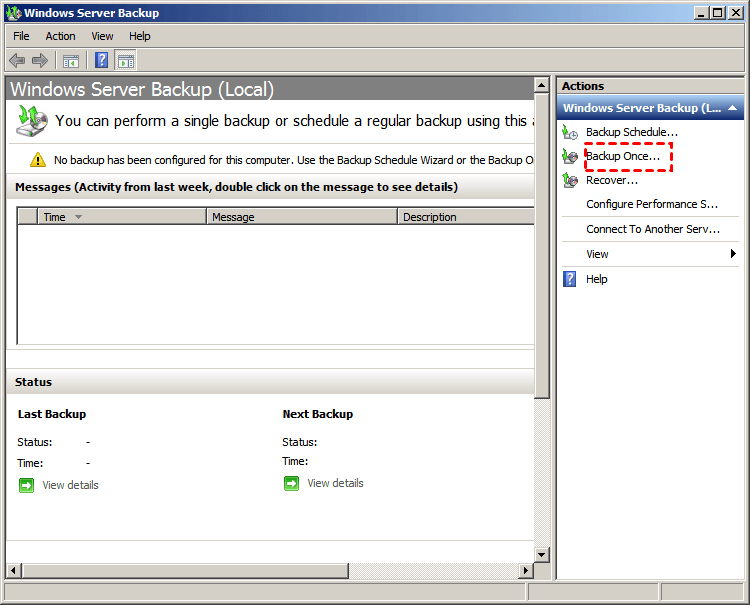 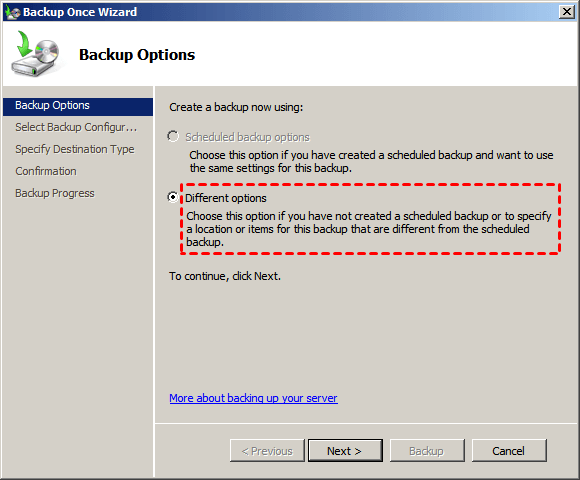 Step 3. Choose Full server option in this window and click Next. It contains all your server data, applications, and system state, so you can use it to do full system recovery together with system state recovery. 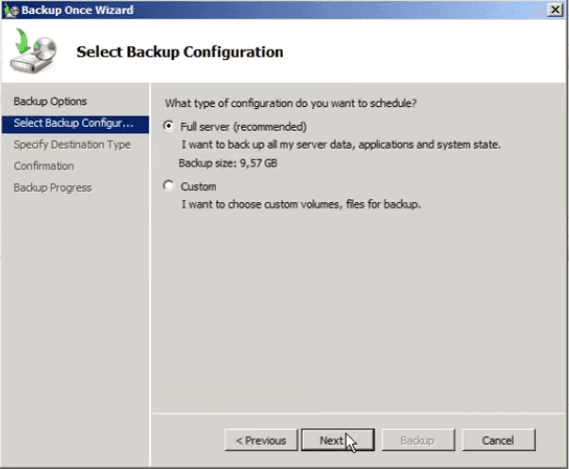 Then click Add Items, and tick System state option in the popping out window. 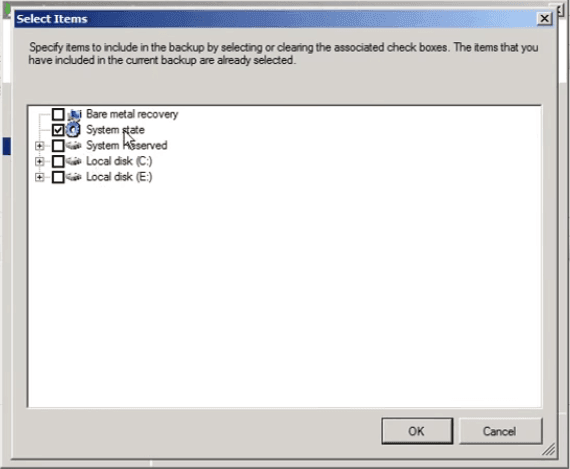 Tip: Alternatively, you can also choose Full server to create a full system image backup as restore point, which can prevent your computer from suffering any disasters, such as startup failure.

Step 4. Specify your destination path to save your backup. You can choose any local drive recognized by your computer or save to network share. 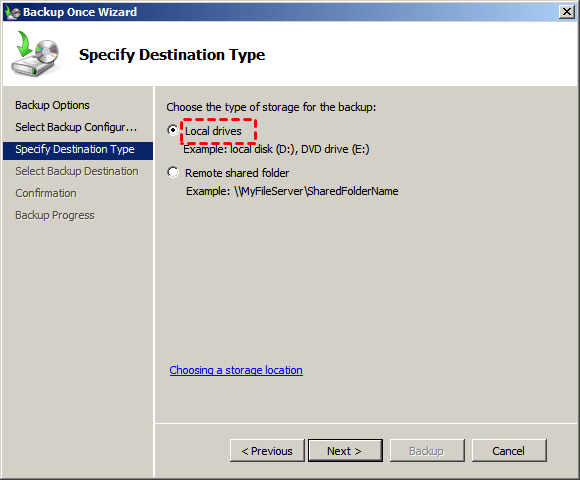 Step 5. Click the drop-down list and choose a backup destination to save the image. Then, click Next and Backup to create system restore point in Windows Server 2008 R2. 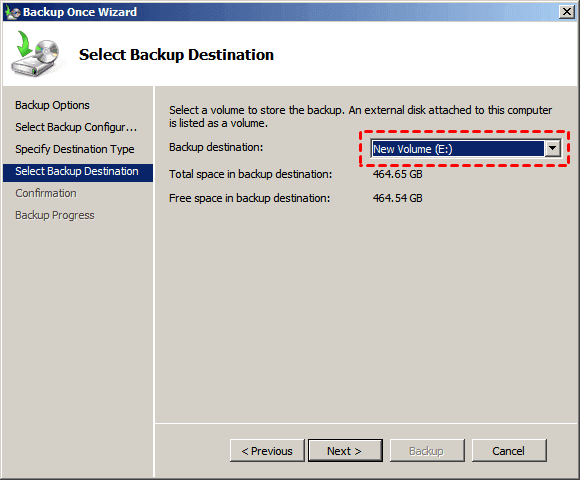 Here you will use Wbadmin command line utility to create Windows Server 2008 (R2) restore point, which is user friendly to IT technicians. But it’s complicated for most users. You could consider using Windows Server Backup.

Step 2. Type a command based on the following syntax and press Enter to execute system state backup.

Notes:
• The X: paremeter refers to the drive letter of the partition you want to save your backup
• The -quiet parameter can undo the prompt before you start backup. That's to say, if you do not type-quiet parameter, you will receive a prompt “Do you want to start the backup operation?” and you need to type Y to ensure that you want to perform this operation. To avoid it, you should add –quiet parameter at the end of command.

That’s all for how to create a system state backup in Windows Server 2008 (R2), you can use either backup software with GUI-based interface or command line. But this kind of backup only works out small failure unless you create a full server backup. And you may feel disappointed when your computer is in the event of serious problem like boot failure.

At this case, all you need is a full system backup that contains the operating system and boot-related partition(s) required to start Windows. Please continue to learn in the next part.

How to create a full system backup to avoid system crashes

You could create a schedule backup in daily/weekly/monthly, specific events like system shutdown, or automatically backup USB flash drive with USB plug in feature.
You could manage backup disk professional with rich backup features, such as, compression, spliting, full/incremental/differential, automatic backup cleanup, etc.Thus, you don't need to worry about the Windows server backup disk full issue.
You could create a Windows Server 2008 bootable USB just in case your computer fails.
You could perform Windows Server backup and restore to new hard drive, computer, even with different hardware. In advanced edition, you are still able to restore system to multiple computers over network at a time.

Then, let’s have a closer look at how to create a restore point in server 2008(R2) with AOMEI Backupper Server. You can backup server 2008 (R2) to any device as long as it can be detected by your server computer, such as, external hard drive, network drive, cloud storage etc. Please connect the device in advance.

Then, launch it and click Backup > System Backup subsequently in the deep-blue screen. After that, it will select the system partition and boot-related partition(s) required to start windows.

Tips:
• All the success backup task will be listed under the Home tab. If you want to make changes to a task, please select the backup task and coresponding options.
• You could switch to the Tools tab and select Create Bootable Media. It helps you restore server 2008(R2) to previous date without booting into Windows or when your computer refuses to boot.
• To protect data safely in multiple computers or within a company,  you could create a portable version of AOMEI Backupper and backup system without installing this software again. Try AOMEI Backupper Technician or TechPlus edition.

In fact, you can create a restore point in Windows Server 2008 (R2) with the help of system state backup feature and it is also available on server 2003/2012/2016/2019/2022 and its R2 version. Please note this feature does not help if your system crashes and want to get it back quickly. So you'd better create a full system backup with AOMEI Backupper Server.