You will learn how Windows Server Backup deletes old backups automatically and corresponding solutions when it fails. All of them are below.

I have a Server 2012 (not R2) Hyper-V Host server using Windows Server Backup (WSB) to back up about 670 GB of data to three 1 TB USB hard drives, rotated weekly. The server was installed July 2013 and has been happily backing up to the backup drives until about a month ago. Now the backups are failing because the backup drives are out of space.

Besides, you still can use a professional server backup software to delete old backups automatically. It's integrated into the backup process, so you don't need to manually delete backups when your backup disk is full. It's not only meet your needs, but also frees your hands.

In Windows Server Backup, there is a feature called automatic disk usage management, it was first introduced in Windows Server 2008 and later inherited in new version to manage disk space for schedule backup. It will shrink the storage space allocated for snapshots (called diff area) to create space for new backups. Once the diff area gets shrunk, old snapshots, as well as corresponding backup versions get deleted.

But after running scheduled backups a couple of times, you will get more backups and less disk space, then you will meet Windows Server Backup does not delete old backups error. This is the limitation of automatic disk usage management. To be specific, WSB will not limit the size of diff area to 1/8 of target volume size, at this time WSB will not shrink the space and the backup task fails. And it does not work for an external hard drive.

If this is your case, please keep reading below and learn the other 2 deletion methods.

Wbadmin provides 3 different parameters to help you specify the way to delete backups per your needs.

For example, to delete all the system backups but the specified one “3”, you could open the Command Prompt window and type the following command line. After that, please remember to press Enter to start this operation.
wbadmin delete systemstatebackup -keepVersions:3 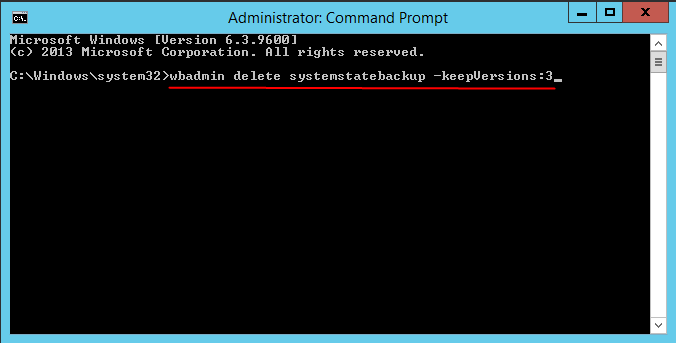 Notes :
-backupTarget: delete the system state backup stored on specific volume.
-machine: is only needed when you have backed up many computers to the same location.

For example, to delete old backups in Windows Server 2008 R2, type “DiskShadow.exe” in command prompt(Admin) and press Enter, then input the command line "delete shadows oldest G:” to start the deletion. The parameter “G” has to be replaced with your backup drive letter or volume GUID. 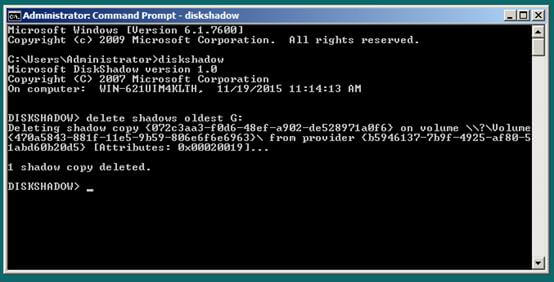 But some users report that the “DiskShadow.exe” command line utility only supports deleting all the backups or the oldest, which force you to run it multiple times to overwrite more than one unwanted backup.

In addition, it still is difficult for many users to learn the parameters to delete old backups. This may take a long time but you may also use the command line incorrectly, eventually leading to irreversible data loss.

Therefore, it's suggested to use an easier way to achive this goal. You could consider using GUI-based free backup software AOMEI Backupper Server to manage disk space automatically with its "Backup Scheme" feature, saving much time and effort.

By using it, you can set the number of backup sets you want to keep,  choose to delete backups at a set time, or combine different sets of time, by daily/weekly/monthly, for example. Once the backup number or set time is exceed, this software will automatically delete old backups to free up space for new backup.

For IT technicians or small and medium-sized companies, its advanced version AOMEI Backupper TechPlus will be a better choice. You can use it to continuously protect data and system on unilimited PCs and servers within one company, provide billable technical support as a service to unlimited clients and copy installation directory to create portable version.

Note: If your destination is network drive/NAS, you need to be sure you have the priority to write data to it. For cloud drive, you need to sign in with your account.

2. The program will choose system and boot-related partition(s) automatically. You just need to select a destination location path to save the image backups. You can backup Windows Server to external hard drive, network share, NAS etc.

3. Click “Schedule”  and select one or more backup settings according to your needs. 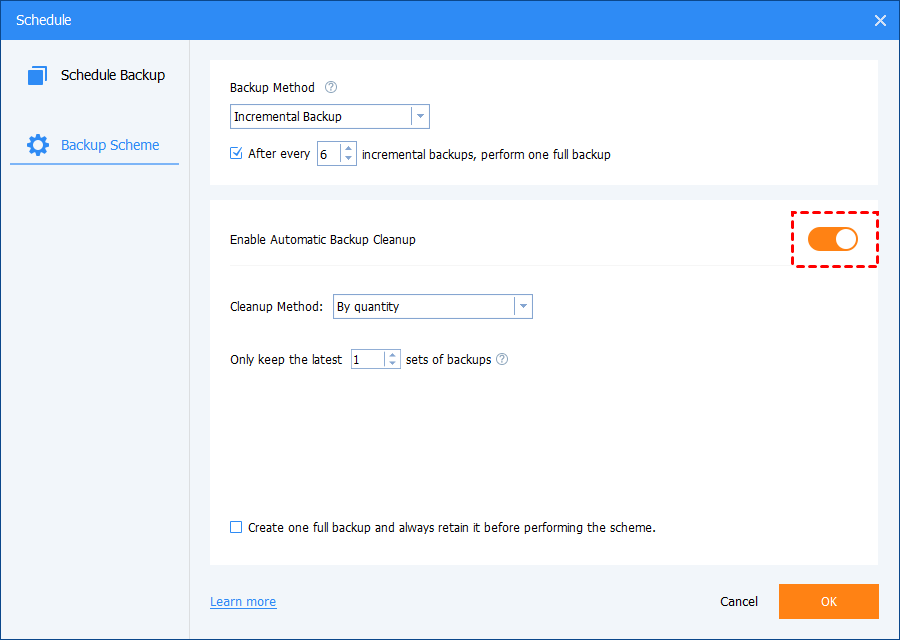 5. Confirm the backup settings and click Start Backup to start this task. Then, it will automatically delete old backup in Windows Server when the set backup number or time is reached.

Notes:
• Don't maually delete backups of the scheduld incremental backup. If you mistakenly delete one of the backups in a backup set, these backups will be invalid and you cannot use it to restore computer to an earlier date. That's because scheduled incremental backup requires all the backups in the backup set to be intact.
• It's suggested to create a bootable media for your computer, so you can restore it even if it's unbootable. And you can use it to on any PCs and servers, such as, Windows Server 2020/2019/2012/2008/2003 including the R2 version and Windows 10/8/7/XP/Vista.

With multiple backups in hands, you can restore backup image to new computer, even with dissimilar hardware, thanks to its "Universal Restore" feature. This feature is designed to resolve incompatibility issue between different computers.

At this time, you need to manually delete old backups with Wbadmin or DiskShadow.exe. By using it, you need to run the backup deletion every time when the backup disk is full. And it's difficult for many users to learn and use the command line correctly.

In view of these reasons, you can choose to use a professional disk space manager - AOMEI Backupper Server to delete old backup automatically. It combines the schedule backup task (eg: daily/weekly/monthly, event triggers, USB plug in, incremental/differential backup) and disk space manager, so you can finish all of them together.