Contents of this article:

"Hi, I encounter a problem. My computer system is Windows Server 2008, there are large of data stored on my computer. I backed up some important files and folders, and then, add new files, there is a warning to tell me my disk is running out. I need to back up all of them. Is Windows Server Backup incremental or any idea to do it? I am urgent. Please help me."

What Is Incremental Backup?

By comparison, the incremental backup takes less backup time and disk space. It's worth trying if you want the most effective methods with the least disk space, please be sure of the security of the backup drive. Also, you can choose to use differential backup as a backup method, it's easy to manage and safer, so you don't need to worry about the backup image being damaged. Click here to learn the differences between incremental and differential backup.

Windows Server Backup in Windows Server 2008 and 2008 R2 would help you a lot to create an incremental backup with the least disk space. Please note that this tool is not installed by default, you need to install it manually in Server Manager. 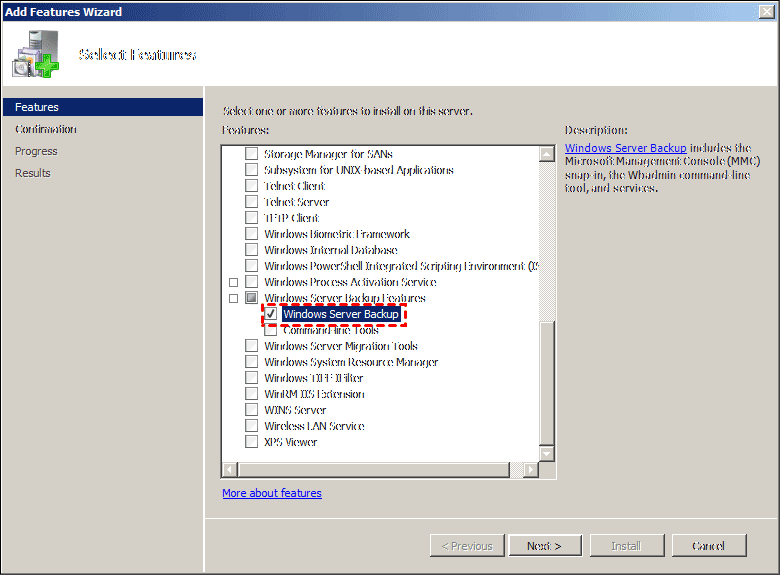 Then, follow the steps below and create Windows Server 2008 (R2) incremental backup. 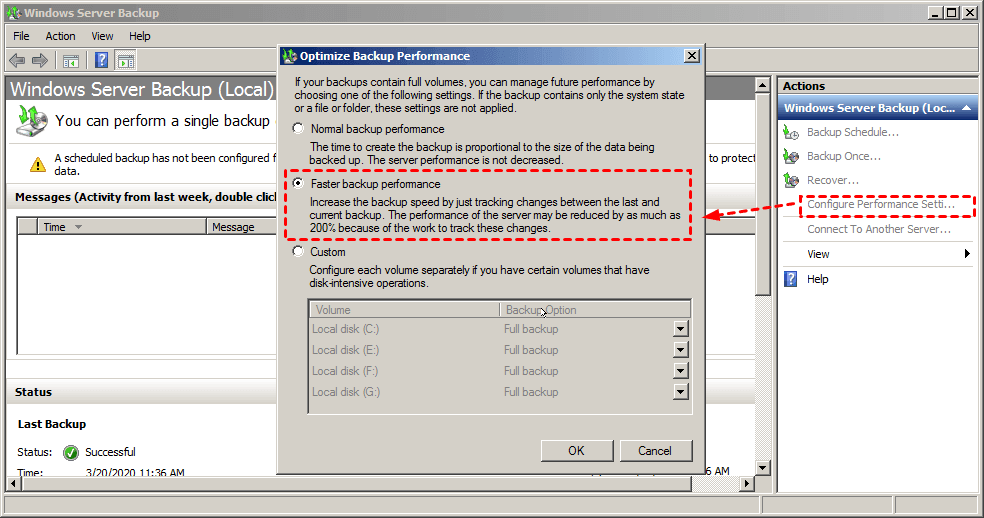 3. Then press Backup Schedule... in the Actions column, and then click Next >. 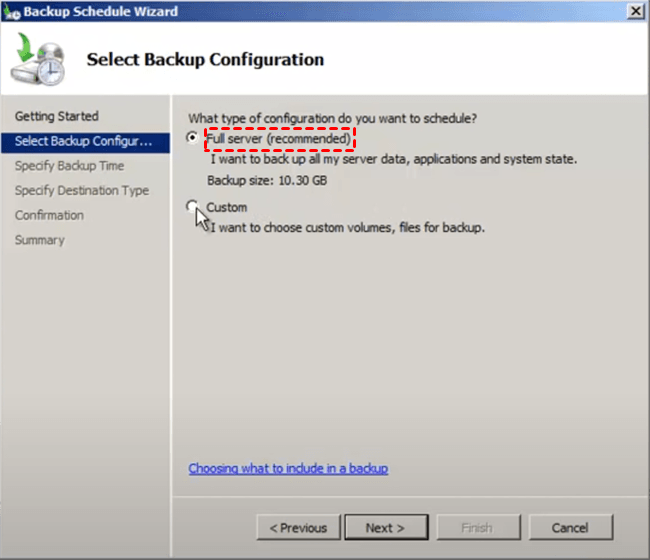 5. Choose Once a day or More than Once a day and specify the time you would like to backup, and hit Next >. 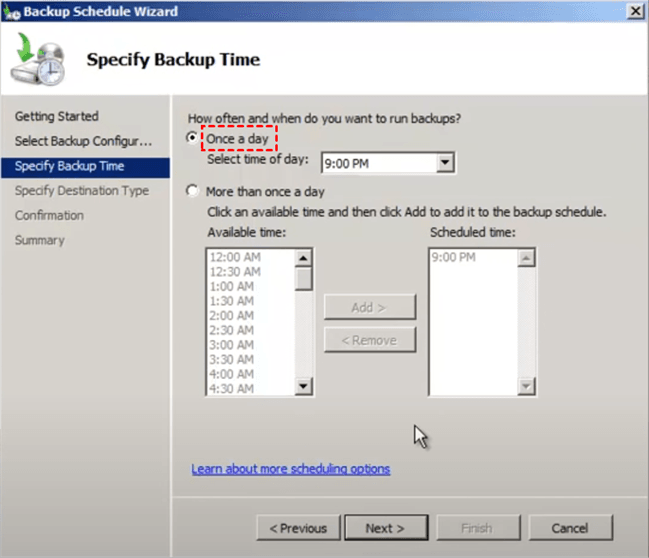 6. Select Back up to a hard disk that is dedicated for backups (recommended), and press Next >. 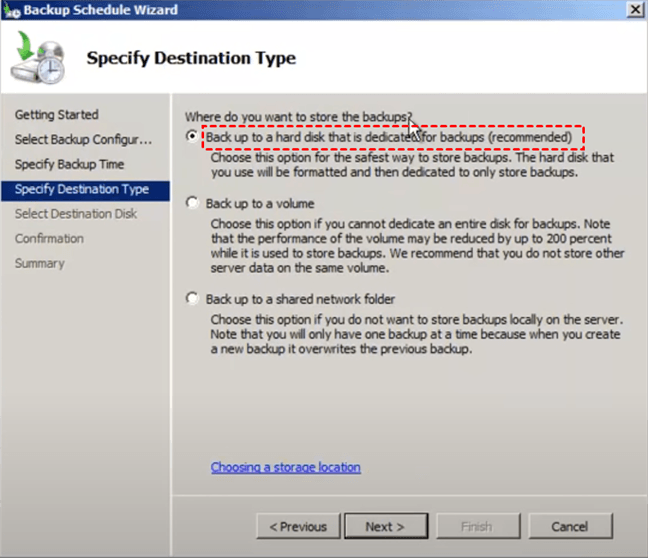 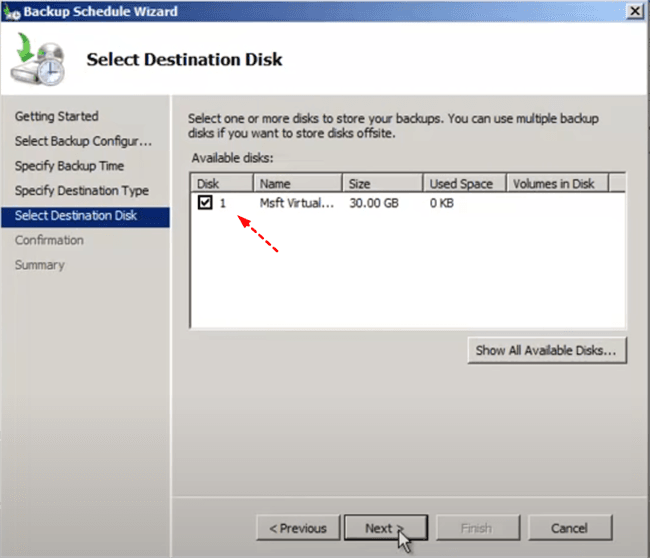 However, there are some limitations of Windows Server Backup:

If you happen to encounter these problems or think the steps are quite complicated, you still can create Windows Server 2008 (R2) incremental backup with third-party reliable software in the next part. You can complete the backup task in simple steps and it's easy to set schedule backup and incremental backup, even the backup retention policy.

AOMEI Backupper Server is a reliable and professional server backup software to help you create incremental backups in Windows Server 2008 and it is more flexible and easy to operate. With this software, you can also enjoy the following advantages and excellent features:

Please download AOMEI Backupper Server to have a try!

(PS: If you want to create an incremental backup for multiple computers in a company or different locations, try the AOMEI Backupper TechPlus edition. It supports unlimited PCs & servers and allows you to run AOMEI Backupper from a flash drive without installing again.)

Note: You can backup multiple hard drives at the same time by clicking Add Disk to select the disk you want to backup. But you can only restore disk one by one.

Step 3. Press the inverted triangle icon to select a local path or add a share or NAS device to store backup images. If it's an external disk, please connect it in advance. If it's a network location, you need to have access permission for it.

Step 4. Click Schedule Backup and enable it, then select Daily, Weekly Monthly, Event triggers, or USB plug in. And, by default, it will enable incremental backup automatically. 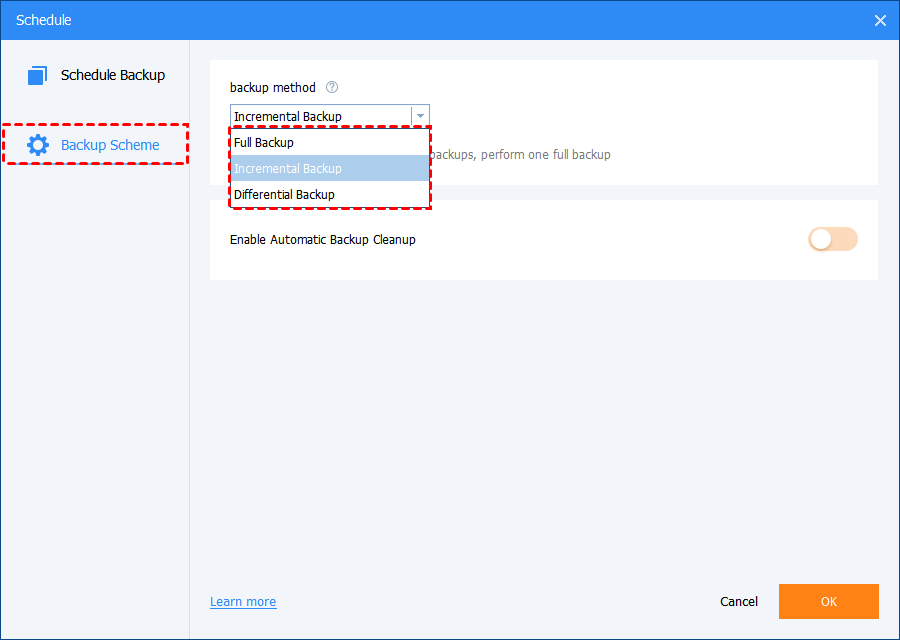 Besides, you still enjoy other useful features:

Go to Home > Find the backup task, and click the more options icon > Backup > Incremental Backup. That is, you could also perform a full backup or differential backup here. 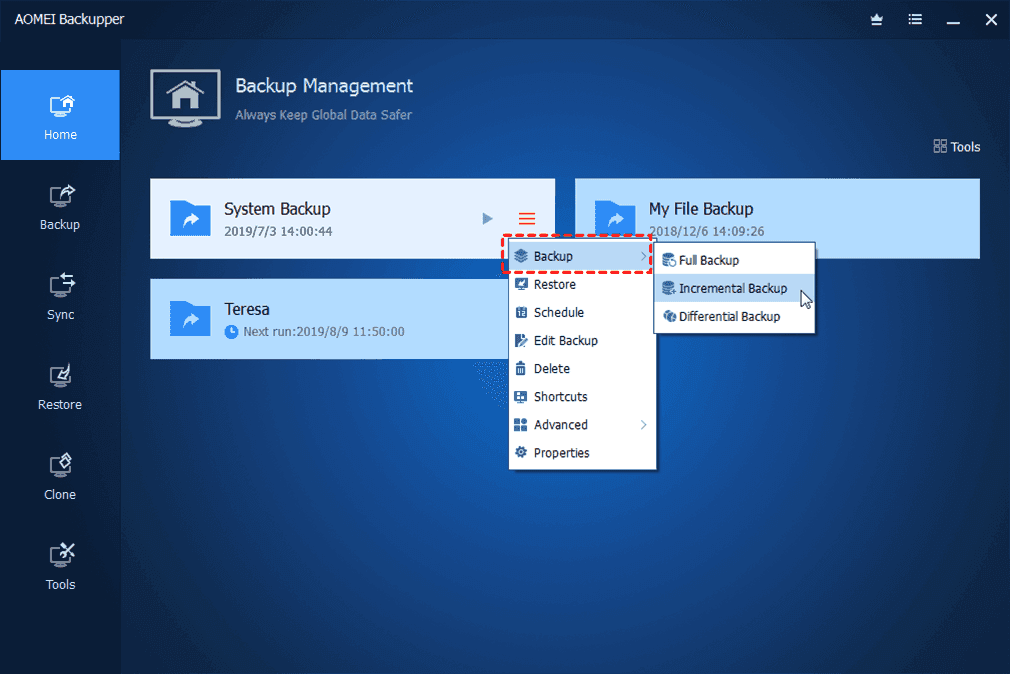 According to Microsoft, Windows Server 2008 and 2008 R2 support has been ended on January 14, 2020. It means that you can’t get Windows security updates, drivers, and other patches. And it becomes vulnerable, your computer may be attacked and there is a system crash, data corruption, virus attack, human error, etc.

In this case, you are about to face the question of whether to upgrade and data security. How should you decide?

In summary, data protection is very important. Even if your system is still a supported system, your computer may be attacked by viruses, such as ransomware attacks in 2017, and encounter other problems.

If you just want to get all the files and folders from the Windows Server 2008 (R2), you could try file backup or real-time sync to keep all the data and changes to be synced to the destination once the changes occur. And you can easily modify it and add new files to the backup drive without restoring image file first.