How to Create Multiple Schedules in Windows Server Backup

Can you create multiple schedules with Windows Server Backup?

Windows Server Backup (WSB) allows you to protect your data automatically by configuring scheduled backups. But with the WSB user interface, you can only create one backup schedule. Once a scheduled backup was created, you can either delete it or modify it using the Backup Schedule Wizard if you want to create another scheduled task. 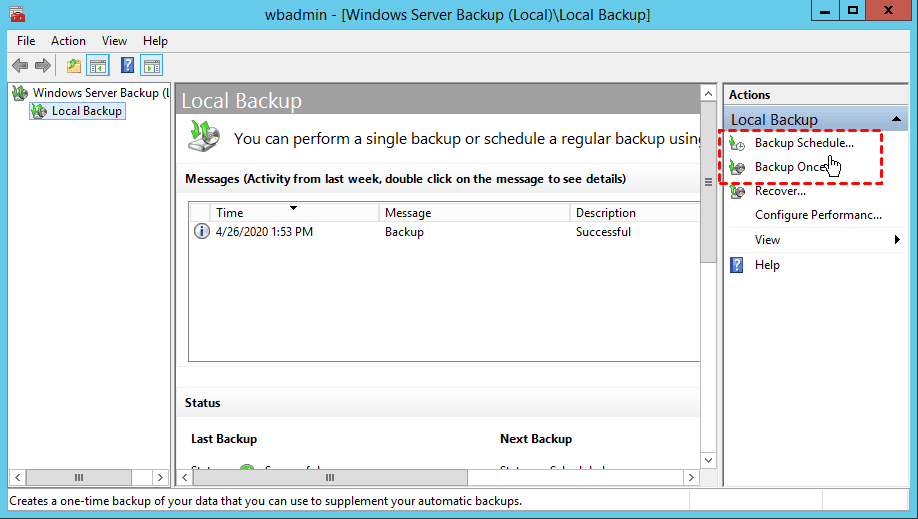 This causes some inconvenience: sometimes you may need more than one backup task with different schedules, such as a Windows Server weekly backup for system state drive, plus a daily backup task for folders you use every day. Is it possible? Well, the answer is Yes. There are 2 methods you can try to create multiple schedules for Windows Server backup.

◇ The first method is using Windows built-in Task Scheduler and Wbadmin. It allows you to have as many scheduled backups as you want without worrying Windows Server Backup overwrite old backups. However, for anyone who’s not familiar with the Windows Task Scheduler, this method can be complex and error-prone.

Besides, there are some limitations of Windows Server Backup you should note:

◇ If you prefer an easier way to create multiple backup schedules flexibly, you can just refer to Method 2 to use the effective backup tool - AOMEI Backupper Server, it helps you to create multiple Windows Server backup jobs in full/incremental/differential mode, and also enables you to customize backup retention policy. 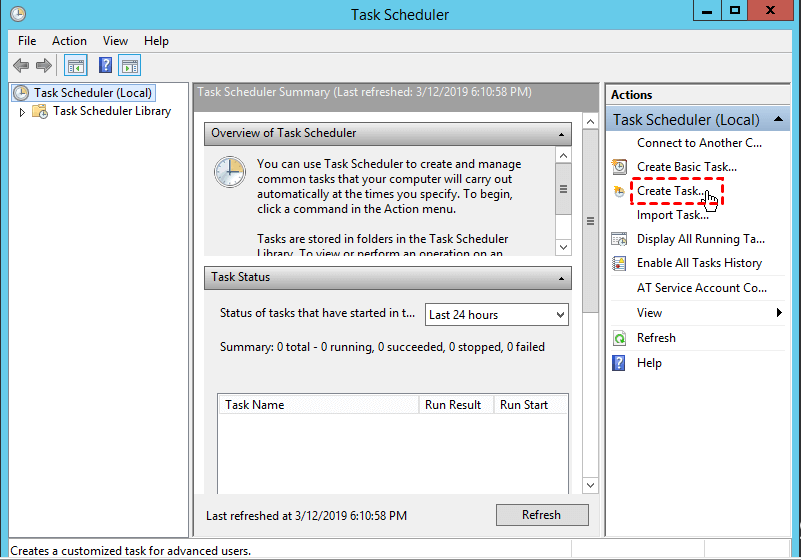 Step 3. In General, you can name the task and write a description if needed. Then check the option Run whether user is logged on or not. 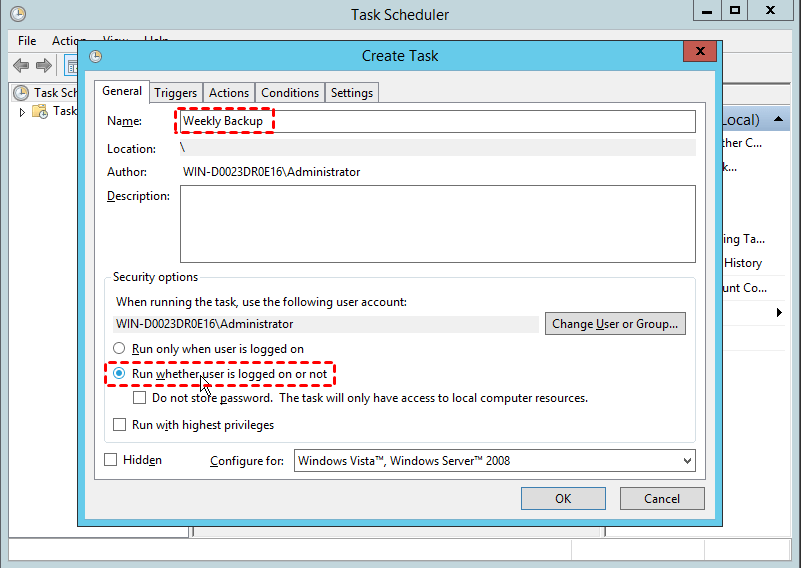 Step 4. Then go to the Triggers tab and click New to choose when you want the backup to run. You can set one time, daily, weekly, and monthly tasks. 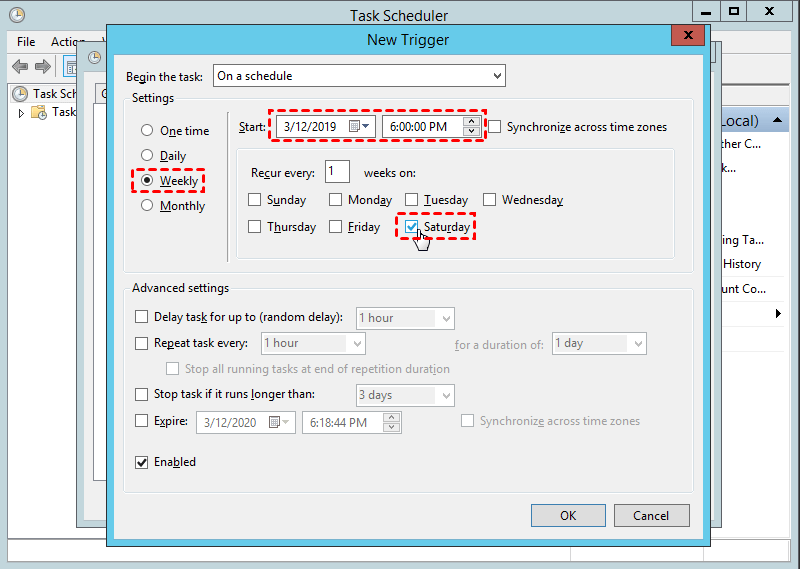 Step 5. Go to the Actions tab, and click New to begin as well. Type “wbadmin” in the Program/script box, and write a backup command in Add argument (optional) box. If you are not familiar with wbadmin in Windows Server 2012/2008, here is an example to back up the entire C to the H: drive: 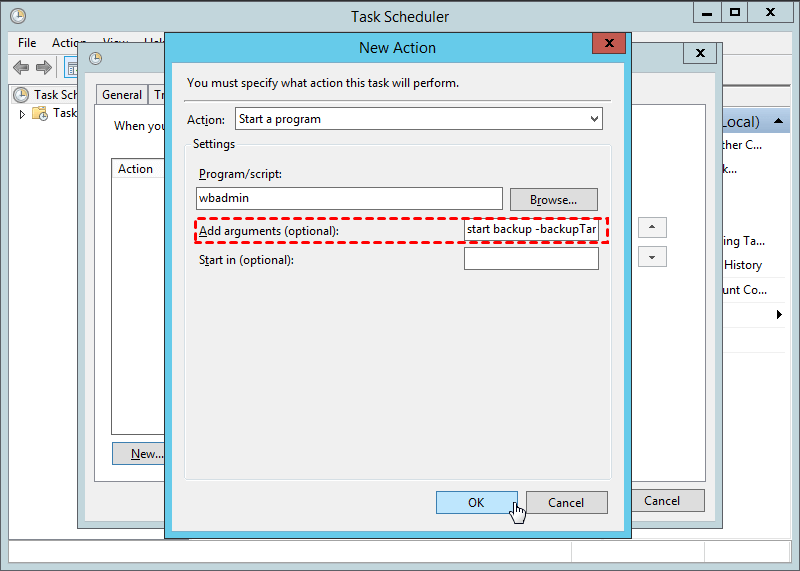 Step 6. Click OK to finish creating this scheduled task. Or you can also go to Conditions tab and Settings tab to have a check.

If you are neither comfortable with WBadmin command nor with Task Scheduler or you may want a more flexible way to make a backup, then you can switch to third-party server backup program that can have multiple scheduled backups with easy operations. Just keep reading to get it.

AOMEI Backupper Server is one professional server backup software which allows you to configure multiple backup schedules running with Task Scheduler or its own service. Let's have a look at its main features:

① Backup schedule
There are five schedule modes available: “Daily”, “Weekly”, “Monthly”, “Event triggers”, and “USB plug in”. You can also perform scheduled full, incremental or differential backup as per your need.
② Backup cleanup
It allows you to create a retention policy for automatic backup cleanup so as to free up disk space. 4 cleanup rules are offered: “By quantity”, “By time”, “By daily/weekly/monthly”, and “By space”.
③ Other features
Partitions that are not formatted with NTFS can be backed up and the destination is not limited.

Step 2. Under Backup tab, choose what to backup. You can have file/folder, system, partition, and disk backup. We are taking System Backup as an example.

Step 3. The needed volume(s) is (are) selected by default. You can name the task and click the column to select the destination path.

Step 4. Click Schedule Backup to decide when you want the task to run and click OK to confirm. Finally, click Start Backup to finish creating this scheduled task.

Other settings you may need:

1. In the Schedule Backup window, you can click Backup Scheme from the left panel and do the following settings:

Now you get two ways to create multiple schedules for Windows Server. If you are not content with Windows Server Backup’s multiple schedules feature, AOMEI Backupper Server is the best alternative. Besides backup and restore, AOMEI Backupper also provides you with the option to clone system, partition, or disk to protect your server without imaging.