How to restore Windows Server 2008 R2 to previous date? If you are looking for a way to do it, pleas continue to see below and this article will introduce you to 3 effective methods.

How do I rollback a Windows Server?

It’s a great pity that Windows Server 2008 and other server-based computer does not include System Restore feature. But you still can use system state backup or full backup to achieve the same goal. The latter is more powerful, and usually, it takes a lot of time, because it is mainly used to perform Windows Server backup and restore when your server computer is in a serious status or refuses to boot.

As for how to restore Windows Server 2008(R2) to a previous date, you have 3 methods in the following

Well then, how to choose them?

And this article wil introduce three methods in details later.

Step 1. Type cmd in the search box, right click the command prompt and run as administrator.

Notes:
● If you do not know the version and the backup target of your backup, you can type wbadmin get versions to gain this information.
● The backup destination location can be a drive letter, a volume GUID-based path, or a remote shared folder path. If you just have one backup, you can choose not to specify backup target.
● If there are multiple computers backed up to the same location, you can use “-machine” switch to specify the server to be recovered.
● The “-quiet” switch means to run the backup without prompt.

Taking Version identifier at 01:46 on 8/17/2017 and backup target on removable media as an example, you can type the following command in CMD:

Here you will use Windows Server Backup to restore system state backup in server computer, it’s a GUI-based built-in backup and restore software for server 2003/2008(R2)/2012(R2)/2016/2019/2022. The steps will be much easier and less error-prone than using wbadmin command line.

Step 1. Type windows server backup and select it from the result list. Then, you will see its main page, click Recover under the Actions tab.

Step 2. On the Getting Started page, select This server and click Next. 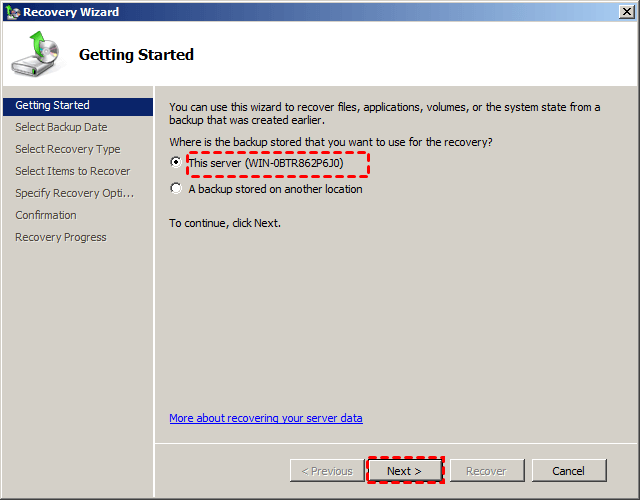 Step 3. Select a backup date to perform system state recovery and click Next. All the backups available for date are shown in bold. 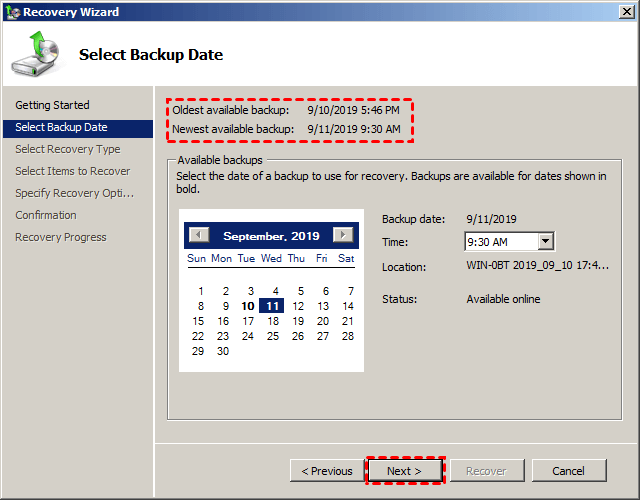 Step 4. Tick System State when you are asked “What do you want to recover” and click Next. 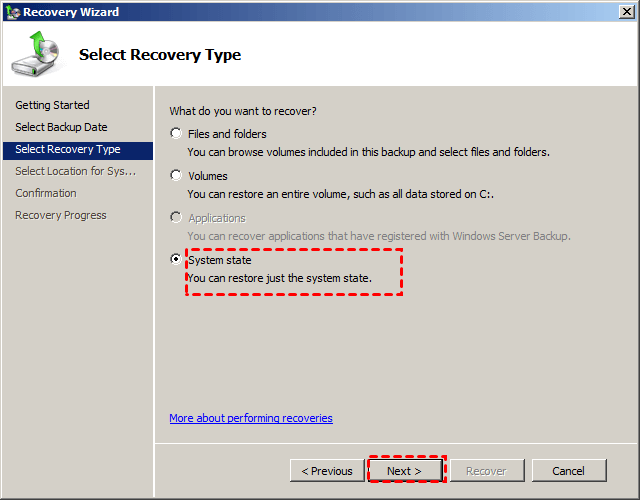 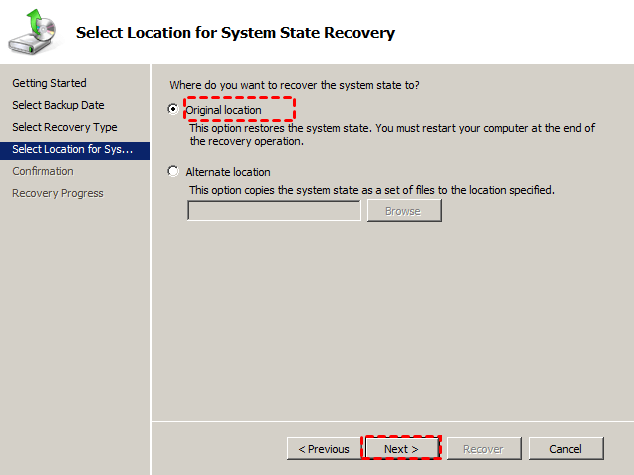 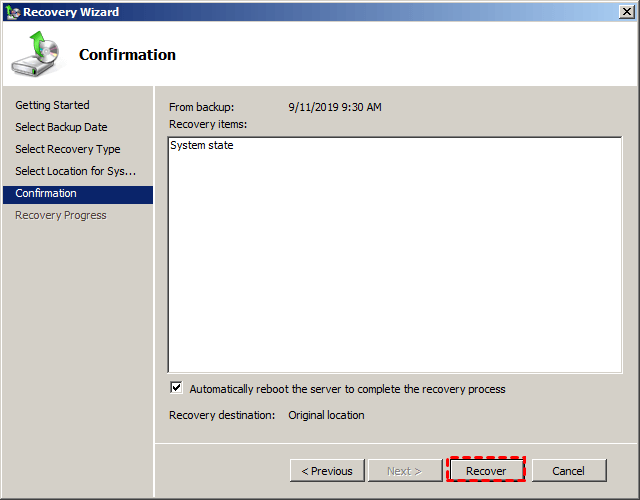 So I strongly recommend you using the best server backup and restore software - AOMEI Backupper Server to restore Windows Server 2008 R2 and repair the operating system. If your computer is unbootable, you still need to create a bootable media in simple steps with this software.

Step 1. Download AOMEI Backupper Server, install and launch it. Then, click Restore and Select Task to find the image file.

Step 3. Select Restore this system backup and click Next.

Notes:
★ If you want to restore Windows Server backup to different computer having dissimilar hardware., this software will check the "Universal Restore" feature by default. If not, please remember to tick it. It helps resolve the incompatible drivers issues and ensure you can successfully boot from the new computer.
★ This software supports not only server 2008 R2, but also 2003/2008(R2)/2012(R2)/2016/2019/2022, so you can use it to restore Windows Server 2012 R2 to previous date as well as other systems.
★ To upgrade hard drive quickly, the easiest way is to clone Windows Server 2008 with a clone feature. It transfter everything from one hard drive to another and make the cloned drive bootable.

All in all, it's suggested to create a backup image in case you need to restore your computer. AOMEI Backupper is a good choice, which not only include everything in backup image, but also make it easier to operate, either backup or restore. And it still allow you deploy image to multiple computer over networks in AOMEI Backupper Technician Plus if you need.