Reasons and solutions for Windows Server 2008 R2 no boot issue

You may need to repair Windows Server 2008 r2 using command prompt due to many reasons, such as, corrupted mbr, partition table, boot sectors, boot manager, boot configuration data, etc. Then, you may wander how to repair it and get your system back to life?

You can first do some basic repair like startup repair, boot directory repair and windows directory repair. Then, if the problem is related to boot files, you can use bootrec exe in Windows Server 2008 r2.

However, sometimes, when the error is too serious to recover from basic repair. For example, you cannot boot because of system failures. You can create a recovery disk and go to the recovery environment for repair instead of within Windows.

In this article, I will show you how to repair Windows Server 2008 R2 step by step with different command prompt. Please stay for a while and check the detailed steps in the following.

Get to the command prompt window in the recovery environment

1. Insert the installation disc that comes along with your computer. Then, restart your computer to BIOS and set it as the first boot option, save changes and reboot. 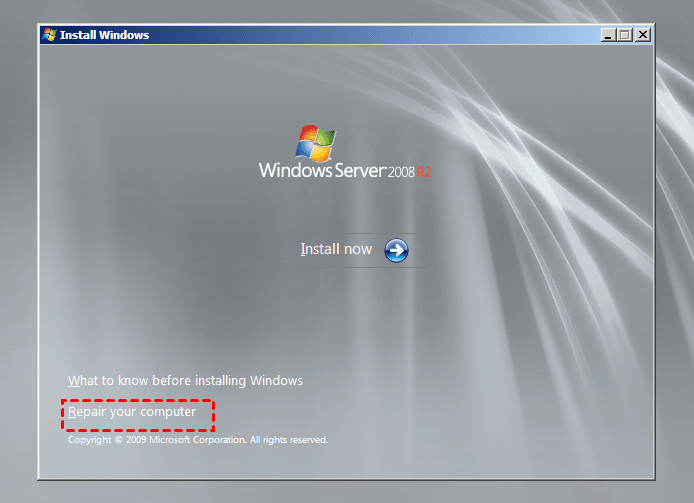 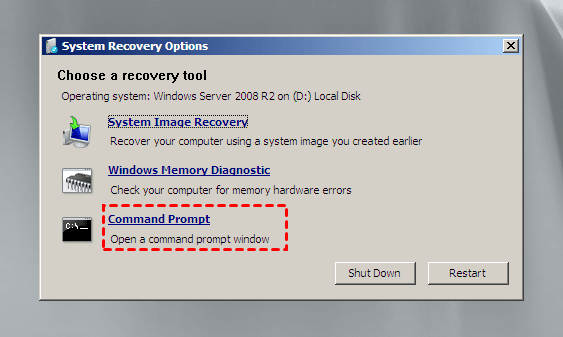 Please note that the drive letter in the recovery mode may be a little different, as it follows the first-come, first-served principle. Thus, before repairing your server 2008 R2, you need to find where the Windows is installed in case you need it.

Type diskpart and then list volume in the command prompt window, you will see all the volumes available on the disk and find your system drive. 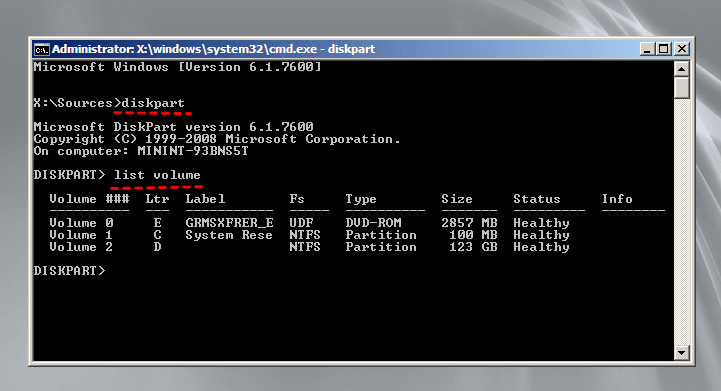 Then, in the command prompt windows, go to X:\sources\recovery> startrep.exe. Just wait until the process completes, it will resolve the registry file issues. 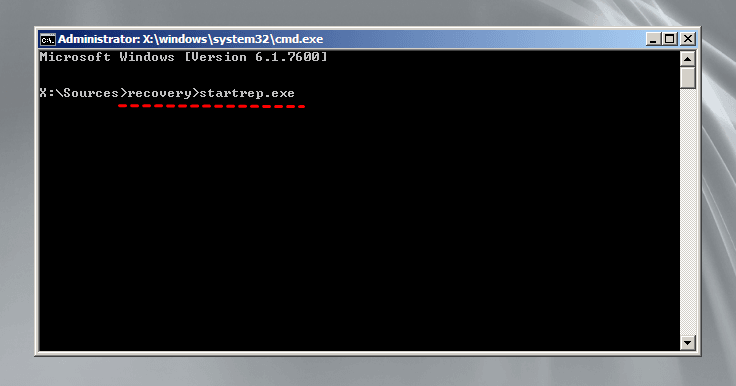 Also you can type chkdsk C: /f /r to fix errors the disk and then locate bad sectors and recover readable information. If you are asked to run this command at the next startup, type y and then restart your computer. 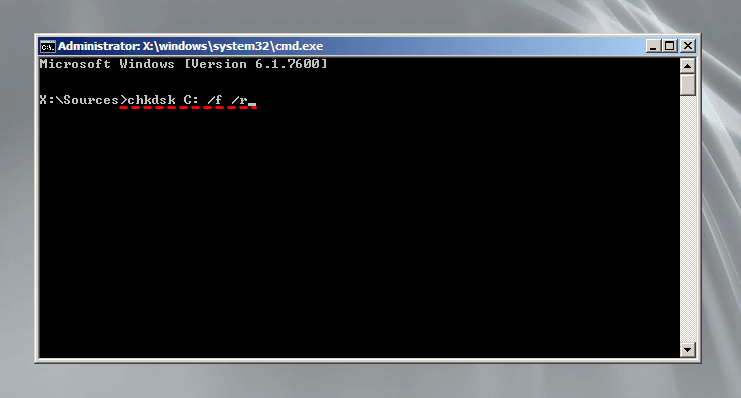 Or you can use sfc /scannow to repair boot files issue. Type sfc /scannow /offbootdir=c:\ /offwindir=c:\windows and hit Enter to run it. 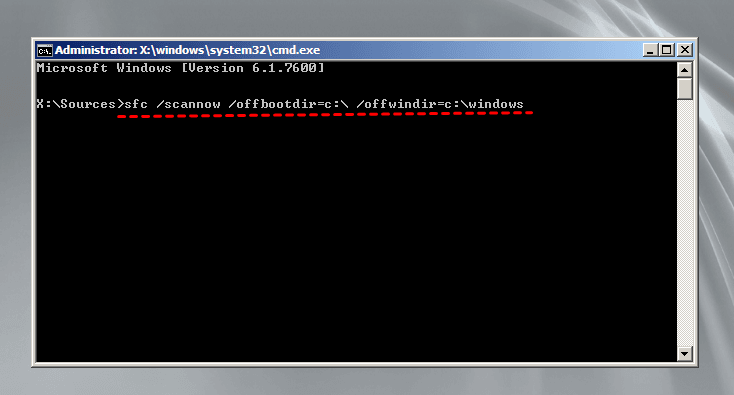 If the sfc /scannow is not working, you can still use DISM command line.  Type as: DISM /image:D:\ /cleanup-image /revertpendingactions. (D: is the drive letter of your system drive. ) 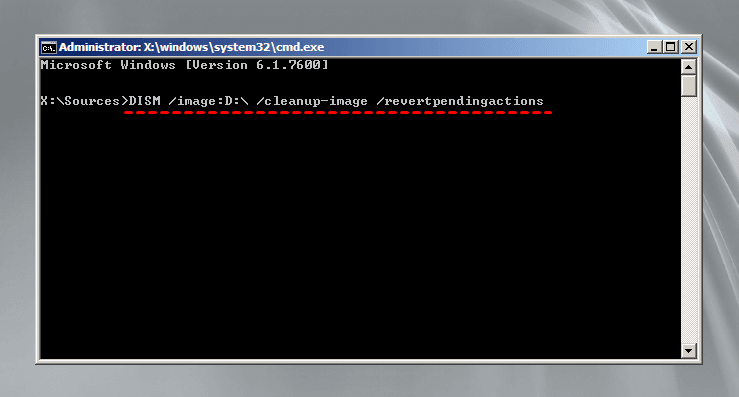 In addition, you still can use bootrec exe in the server 2008 R2, it's used to repair corrupted mbr, boot sector, and bcd files. Type as follow and hit Enter to execute in order. 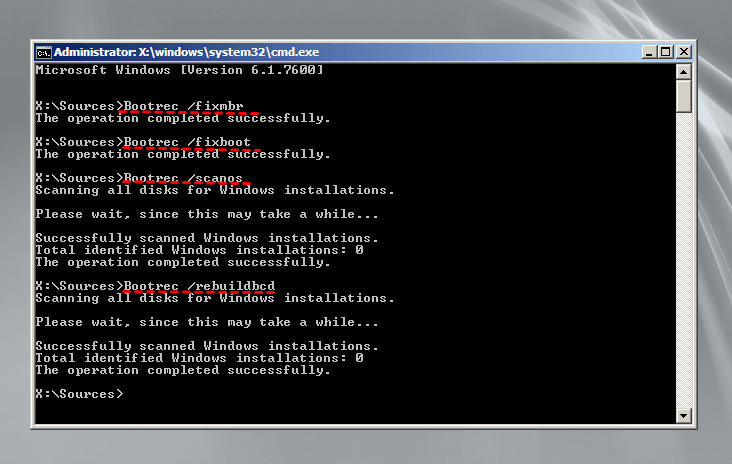 As above mentioned, if the error is so serious that basic repair cannot work, you can run Windows Server 2008 R2 system restore with command line. To do this, you need to create a system image backup first.

To restore a system image created at at 13:29 pm in 07/09/2017 and saved on the E drive.  You can type the following command in the command prompt window and hit Enter.

This works in most cases, but you have to know that the system image backup created by wbadmin is limited to the current computer. If you want to restore the system image to another computer, it will not work. Don't worry about it, you can ask a reliable server backup software - AOMEI Backupper Server  for help.

If you cannot boot PC, you can still create a bootable media with this software and use it to boot your computer into the recovery mode. Then, in the main interface of AOMEI Backupper Server, click Tools and open command line. 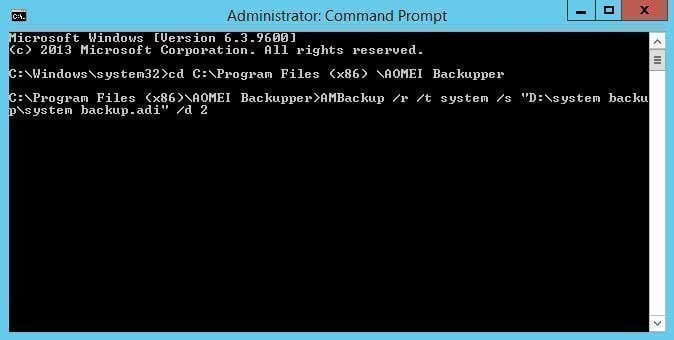 Tip: The drive letters might change under Windows PE environment.

For example: To restore the system backup saved in D:\system backup to disk 2, please type the following command and hit Enter.

If you want to restore to another computer, AOMEI command line still can do this for you.

For example: Restore system in the image named "system backup2.adi" to the partition 0 on disk 0 and perform a universal restore.

As you can see from above, you have x ways to repair Windows Server 2008 R2 using command prompt, select the one according to your situation and the cause for no boot issue.

Among them. AOMEI.exe has better compatibility, which not only allows you to restore system to current computer, but also new computer with dissimilar hardware. And it is also a professional disk clone software to help you clone Windows Server 2008 R2 easily and without efforts. Also works for cloning hard drive in Windows Server 2012, migrating Windows Server 2016 to SSD, etc.

Its advanced version AOMEI Backupper Technician Plus can help you protect unlimited PCs and servers within one company. And it offers unlimited billable technical services to clients as well as enables you to copy installation directory for portable version creation.