What Is Windows Complete PC Restore Server 2008 and How to Use it?

In this article, you can learn to restore your Server 2008 with Windows Complete PC Restore. Are you curious about it? Just see below and then learn what is it and how to use it.

I had a dell server 2008 sp2 that was used as a file share. The server itself has died. Besides, I happen to have a server very similar in hardware as well as a backup image in external hard drive. Can I restore server 2008 to previous date with Complete PC Restore? How to get it? Thanks in advance for any help.”

What is Windows Complete PC Restore?

Windows Complete PC Restore is a feature in Windows Vista and Windows Server 2008, which allows you to restore a system image backup created by the built-in backup tool. In Windows Vista, you can use Backup and Restore Center. In Server 2008, you can use Windows Server Backup. However, this feature is not added by default. You need to add it manually.

Although Windows Complete PC Restore in Vista or Server 2008 can help you restore your computer to a previous date, but you cannot use it frequently. Because this operation may lead to data loss. Also, the recently installed programs will be removed from the computer.

According to theory, if the new computer has the same hardware as your old computer, you can restore it. If not, your computer may be unbootable after recovery.

In fact, there are many backup and restore software on the market that can help you restore your server with different hardware. You can consider using a reliable and trustworthy software like AOMEI Backupper Server.

How to use Windows Complete PC Restore in Server 2008?

To get Windows Complete PC Restore in Server 2008, you need a installation disc and a bare metal backup for it. And the bare metal recovery can only be performed when the system is offline.

Now, continue to see below and learn the detailed steps.

Step 1. Insert installation disc for Server 2008, go to BIOS and set boot priority for disc, then press any key to boot from it.

Step 2. Select language and other preferences in the initial screen and click Next. 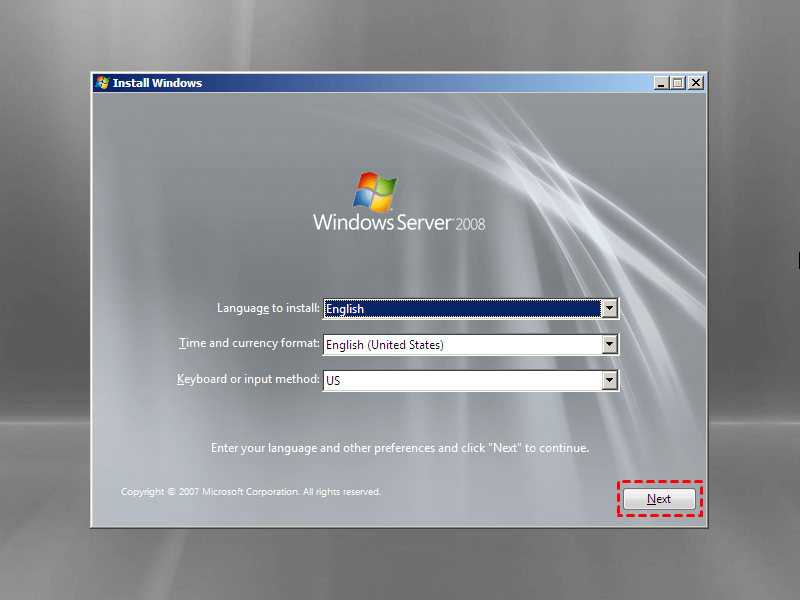 Step 3. Click Repair your computer at the lower left corner. 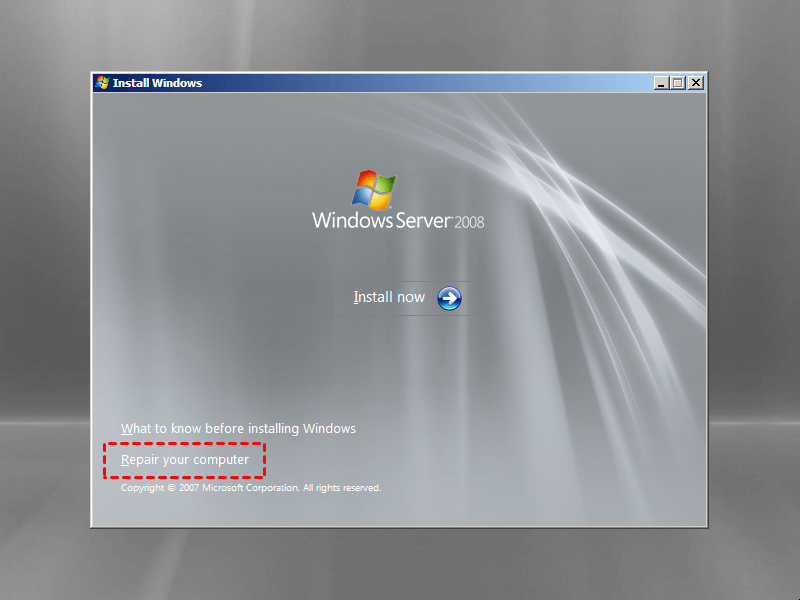 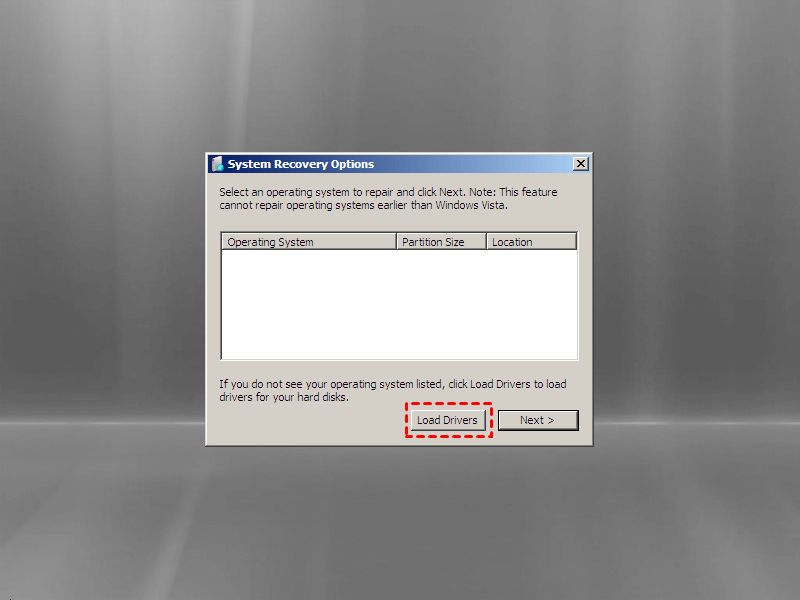 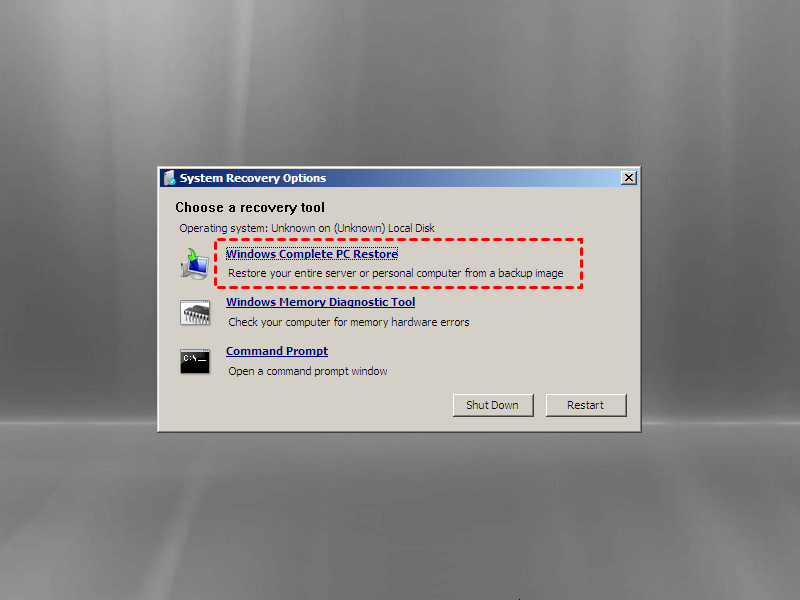 Step 6. Then, the Windows will start to scan your computer and find the image on it. But if your backup image is on the external hard drive or network drive, you will receive the following prompt. Just connect the disk and click Retry, then tick Use the latest available backup or Restore a different backup and click Next. 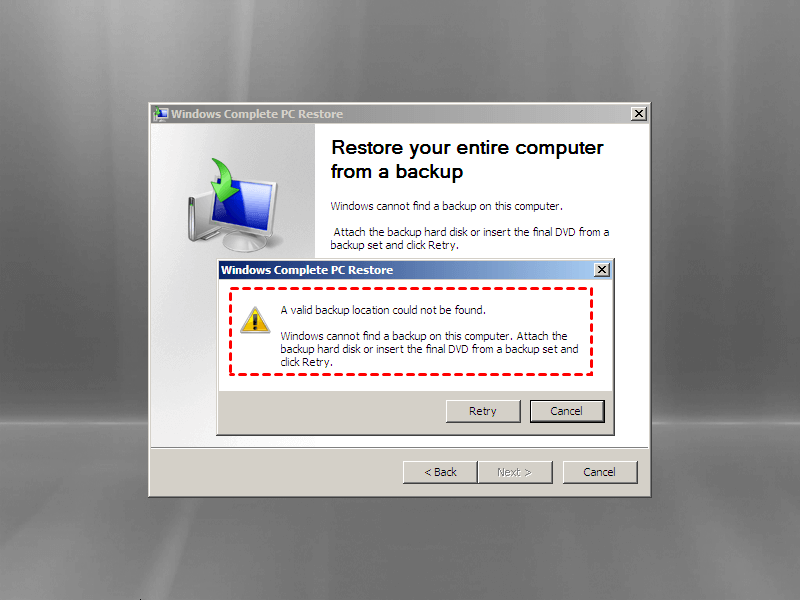 Step 8. In the Choose how to restore your backup window, you can install drivers for the disk, exclude disk not to be formatted, click the Advanced button to get more information. Then, click Next.

Step 9. Then, confirm your settings and click Finish to start the restoration. If there are any prompt, click OK to continue. Once done, your server will reboot and load Windows.

Suppose you have a system image backup created by AOMEI Backupper Server, you can restore Server 2008/2012/2012/2019 and its R2version to different computer.

Unlike Windows Server Backup, AOMEI Backupper Server has some obvious advantages. You can perform dissimilar hardware restore via “Universal Restore” feature. Also, you can create disk backup, partition backup, file backup instead of only system backup. More so, it provides more extra features for the main function. In addition, it’s disk cloning software, which give you a chance to clone system, disk and partition. If you want to protect unlimited PCs and Servers or just want a portable version of installation directory, you can consider AOMEI Backupper Tech Plus.

Download AOMEI Backkupper Server, install and launch it. Connect the drive that include the image to your new server and make sure it can be recognized. See below and learn the alternative way to Windows Server Backup restore to different computer.

Step 3. Select to restore the entire backup or a part, then click Next.

But if you want to perform Windows Server 2008/2008 R2/2012/2016/2019 backup and restore to different hardware, you can only turn to a third-party backup and restore software, such as, AOMEI Backupper Server. It’s suitable for all kinds of server-based operating system. It has a wizard-like interface and all the steps are very easy.