How to Migrate Windows Server 2008 (R2) to New Hardware

Moving Windows Server 2008 or 2008 R2 to new machine with dissimilar hardware can be as easy as pie if we find the best solution. Get a powerful server backup and restore tool to help you from this page.

Migrate Windows Server 2008 to another server

I have a Windows Server 2008 R2 installed on a HP Server with Simple 1 TB HD (no RAID). I need to migrate to a new Dell server with RAID 1 level T630 (2 x 2 TB), just that I'm having a hard time to migrate because the system does not boot.
I've tried the repair of the system through the recovery mode, only first just that the server can only acknowledge the system include the RAID driver manually. I've done repair and I still couldn't solve the problem. Anyone have an idea to solve the problem?

It is a common case that we want to move our Windows Server 2008 to new hardware (computer), either for personal or business use. Reinstalling the whole system is unpractical because it is time-consuming. Especially, when we want to move Server 2008 to numbers of computers, reinstallation seems more infeasible. Then how about making a system backup and restoring the image on the new hardware? It sounds good. To do this, we should first find out a powerful tool to give us a hand.

When dealing with “moving Windows Server 2008 to new hardware”, AOMEI Backupper can complete this task with the Universal Restore feature. This function can be used to restore all kinds of Windows OS to different hardware, promising that all hardware can be booted properly after the restoration.

Before you can restore Windows Server 2008 (R2) to different hardware, you need to create a system image backup with the "System Backup" feature, and then create a bootable USB flash drive or bootable DVD/CD using the "Create Bootable Media" function. Download the tool now and follow the steps below to make it.

Run AOMEI Backupper Server > Click Backup > Click System Backup > Select a path to save the backup image (You can save the image to a NAS, or a USB drive) > Click Start Backup.

Then you need to create a bootable USB drive to boot the target device. Click Tools, select Create Bootable Media and follow the wizard to make it.

2. After loading the main interface of AOMEI Backupper, click Restore and Select Image File to locate the backup image you created before.

3. Select Restore this system backup and tick Restore system to other location in the bottom. 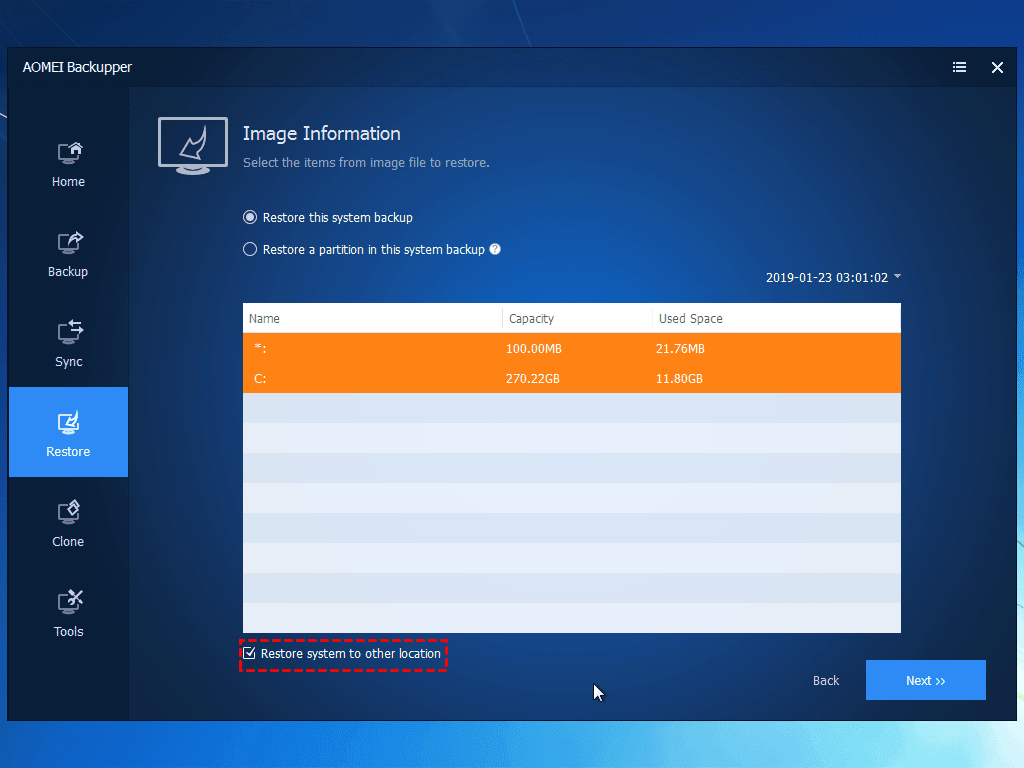 4. Specify the destination location to receive the restored data, and then click Next to continue.

5. Preview the operation to be executed. Tick the Universal Restore option to ensure the system is bootable after restoring to dissimilar hardware. Click Start Restore to start the restoration.

✍ Tip: If you want to move Server 2008 to numbers of computers, you can try AOMEI PXE Boot Tool. It can help you boot and restore many computers from the microsystem in the network.

That’s all for how to migrate Windows Server 2008 to new hardware. As you can see, AOMEI Backupper Server can help you achieve the goal without effort. The whole process is very simple. By the way, it provides various functions to help you backup your Server on the new hardware.

To protect unlimited PCs and servers within your company, you may choose AOMEI Backupper Technician Plus. You can use it to provide billable technical support to your clients. You can also copy installation directory to create portable AOMEI Backupper. Go for it now and discover more!