If you are looking for the best Windows Server 2012 R2 backup software, AOMEI Backupper Server is worth mentioning, scroll down to learn more and how it works.

Windows Server is widely used among small and medium businesses, Windows Server 2012 R2, for example, to operates the entire IT infrastructure from a single box. This is very useful for SMBs who don’t own an IT department or data center to work with and the businessman can get the most from their investment hardware.

And the server 2012 adds more new features, such as work folders, which help users make corporate data available. Besides, there are two main improvements. Compared with SMB3.0, SMB in Server 2012 R2 has been improved. Another improvement is that you can uninstall SMB 1.0, as long as you don’t have any legacy left.

However, this server computer is not immune to system crashes, hard disk failures, virus attacks, etc, finally resulting in heavy data loss, including your personal data and the working documents, like customer info and business profiles. Therefore, it's necessary to find the best Windows Server 2012 R2 backup software and use it to create a Windows Server image backup.

What is the best Windows Server 2012 R2 backup software?

However, once Microsoft disconnects Windows Server 2012 R2, your server will become vulnerable, since all the security updates like drivers, Windows updates, etc will be unavailable. And sometimes, you may be disppointed by Windows Server Backup limitations, for example, this software does not doing incremental backup in some situations.

In view of this, you choose to try the best Windows Server Backup alternative- AOMEI Backupper Server to create a system image in Windows Server 2012 R2. It's simple and has more outstanding features, especially for long-term data protection. 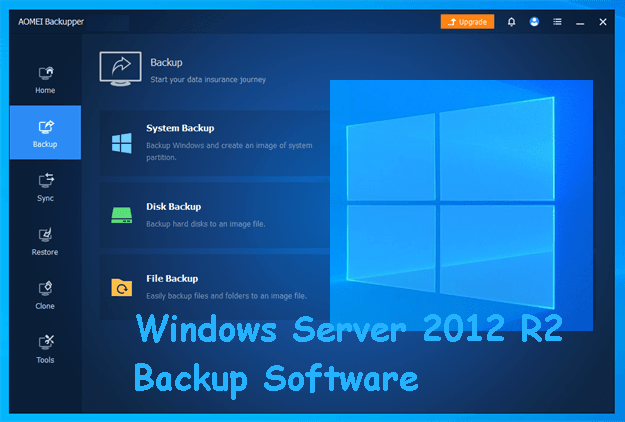 AOMEI Backupper Server is one of the best backup software for Windows Server 2012 R2, 2016, 2019, 2022 and all the previous versions, and can help you protect your computer safely by its rich backup features, even if its extended support is ended.

This software supports all the backup solutions, including System Backup, Disk Backup, Partition Backup, File Backup and Cloud Backup. The previous two solutions will include the operating system you are currently using.
It is able to create image backup for server 2012 R2 automatically and manage disk space effortlessly. You can combine schedule backup (daily, weekly, monthly, event triggers, USB plug in) and backup scheme (incremental/differential backup, automatic backup cleanup).
Besides, you are capable of creating multiple backups to make it safer by backing up to different locations, such as, external hard drive, USB drive, network share or NAS, cloud drive, etc.
With a backup image, you can get your data or computer back in a very short time by restoring system to new hard drive, even computer with dissimilar hardware. Selective file restore is also supported.

In addition, thanks to its intuitive interface, everyone can protect data and the system in simple steps with its complete backup solutions. Please download it to have a try! For IT technician, you could try advanced edition - AOMEI Backupper Technician Plus.

Before backing up Server 2012 R2, you need to do some preparations:

Then, let's start to create a system image for Windows Server 2012 R2 with the detailed steps below.

Step 2. This software will automatically select the required partitions for a system backup to ensure a secure boot. Click where the arrow points and select a path to save the backup image. It can be any detected storage, such as internal disk, external drive, network drive, cloud storage, or NAS device.

Incremental/differential backups: Both features can help you save backup time and disk space by backing up the changed files only.

Automatic Backup Cleanup: This feature is to delete backup files and avoid backup disk full when there is an increasing number of backups. It supports 3 cleanup methods, namely By quantity, By time, By daily/weekly/monthly.

Then, wait until the backup task completes, and see if the backup image is listed in the "Home" tab. All the successful tasks will be listed here. To restore the image, just select the image and the restore option to start.

In addition, it's strongly recommended to create Windows Server 2012 R2 recovery disk in advance, so you can restore your server 2012 R2 even when it fails to boot.

Windows Server Backup, known as free backup software for Windows Server 2012 R2, will end of life on October 10,  2023 and may disappoint you when you want to create an incremental backup. Sometimes, it creates a full backup as a replacement.

Can't afford data loss caused by any computer issues? Download the free trial to protect your server now! For unlimited servers and PCs, you need to use AOMEI Backupper Technician.