File Sync to OneDrive during Shutdown without Losing Data

You will learn how to perform file sync during shutdown without data loss. And your computer will shutdown automatically after this operation completes.

Whether you want to make an exact copy of original files for backup or easy access, cloud storage like OneDrive, Dropbox, Google Drive is a very popular choice. However, what makes many users confusing is that sometimes users just want to copy data to it and then shutdown the system, but these cloud storage start to sync files automatically.

At this time, you may wander how to shutdown system during the synchronization without losing data. Here, in this article, I'll show you how to perform file sync during shutdown and then shutdown system automatically. Please click the anchor text to learn more about file sync and the stepwise guide.

How does file synchronization work?

File sync, whether one-way or two-way, keeps we always have two or more copies of files in different locations, so we can access or edit them anytime anywhere. Also, you can schedule or network sync files as you like. File sync during system shutdown is one of them.

What is the best file sync software 2020?

In the previous part, we said how does file sync work. Presumably, you may also get something about file sync. Next, let's continue to talk about best file sync software in 2020. I strongly recommend you AOMEI Backupper Professional, which can not only sync files during shutdown, but also shut down PC when the sync task is completed. Also, here are some other useful features you may be interested.

To sync files before system shutdown, you need to make use of "Event triggers" and its "System Shutdown" feature in AOMEI Backupper Professional. It will delay shutdown your computer and sync the pending files at first. Also, you can set the On completion operation during the synchronization.

Well then, I'll take file sync to OneDrive during system shutdown as an example to show you the entire process. Please download the desktop app on your computer and be sure your network is normal, so you can use it as backup storage. And these steps are also applicable to sync local folder to Dropbox and Google Drive.

Step 1. Download AOMEI Backupper Professional, install and launch it. Then, enter the main page and select Backup -> File Sync in order. If you don't want to miss any changes, "Real-time Sync" will be a better choice. It will monitor files in real-time and sync any detected changes immediately. 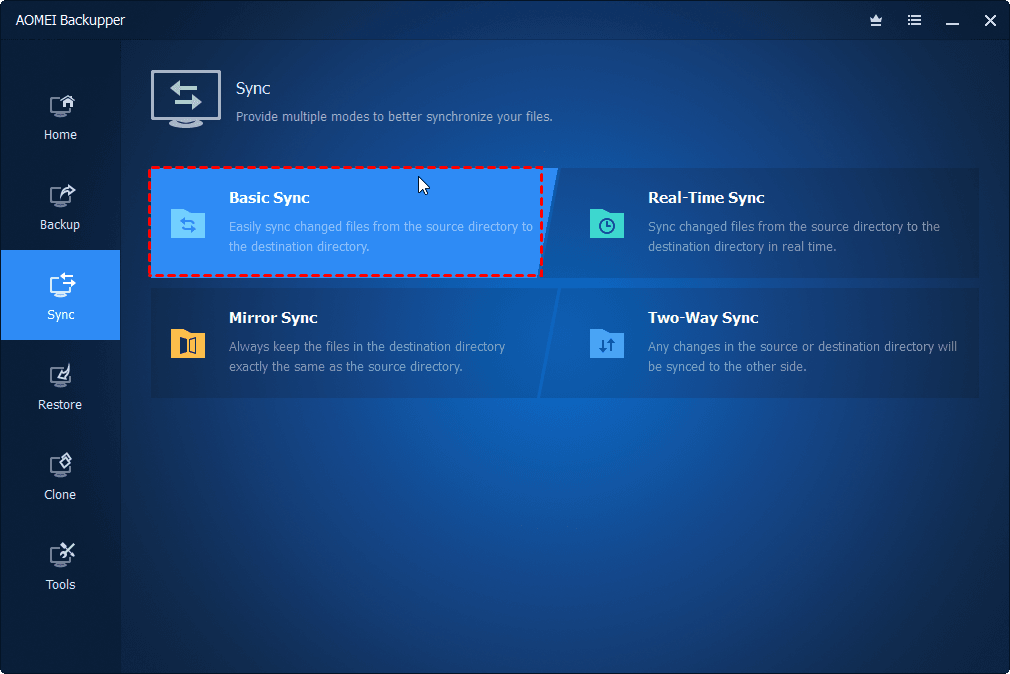 Step 2. Click Add Folder to select the files you want to sync before shutdown. 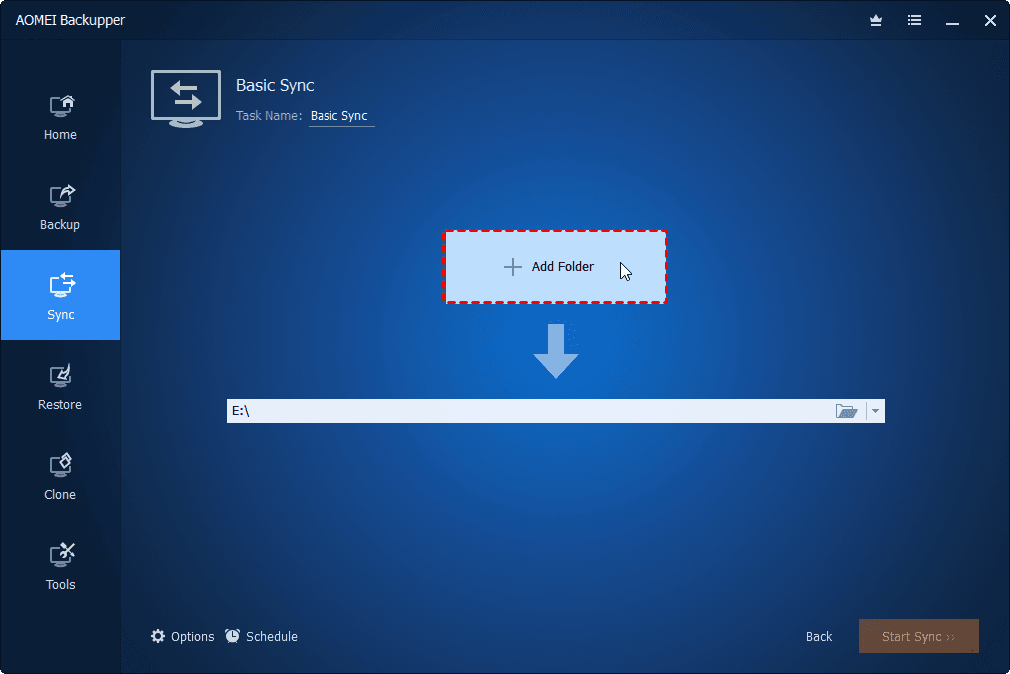 Step 3. To sync local folders to OneDrive, you need to add OneDrive as destination path by clicking the inverted triangle -> Select a cloud drive -> OneDrive and OK to confirm. 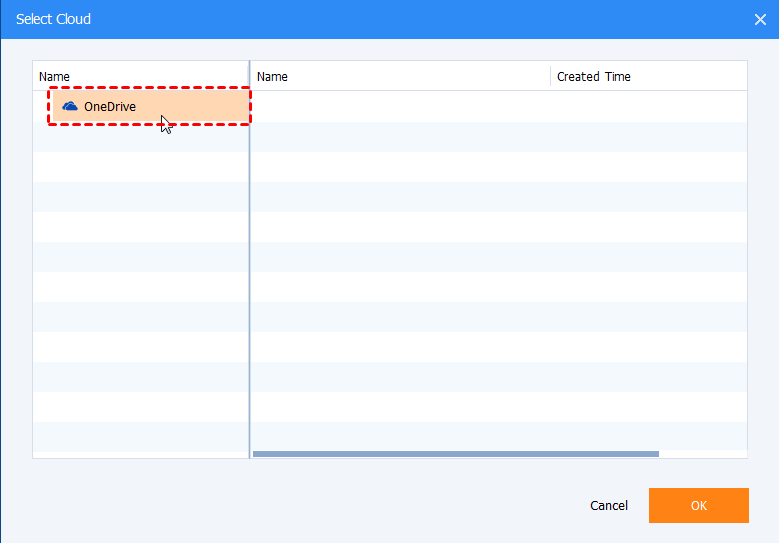 Step 4. To perform file sync before shutdown, click Schedule -> Event triggers -> System shutdown subsequently. To schedule file sync in daily, you still need to check "Run one time everyday" at the lower left corner. Also, you can use other event triggers, it's all your decision. 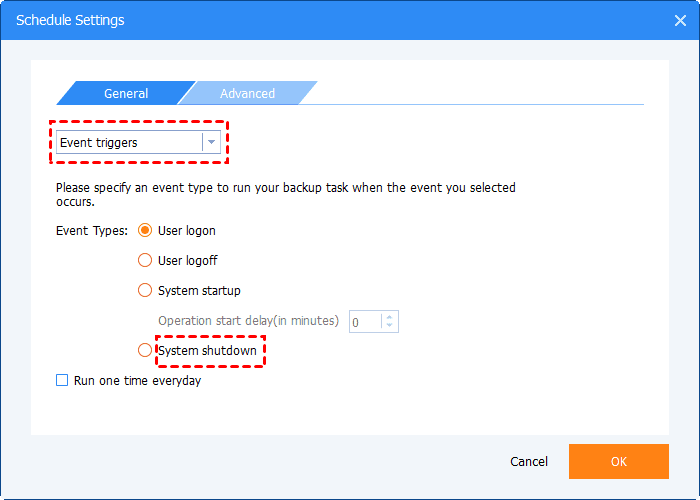 Step 5. Finally, click Start Sync to sync file during system shutdown. If you want to shutdown the computer without human intervention, you could click the settings icon and then tick "On completion" -> select "Shut down PC" option. 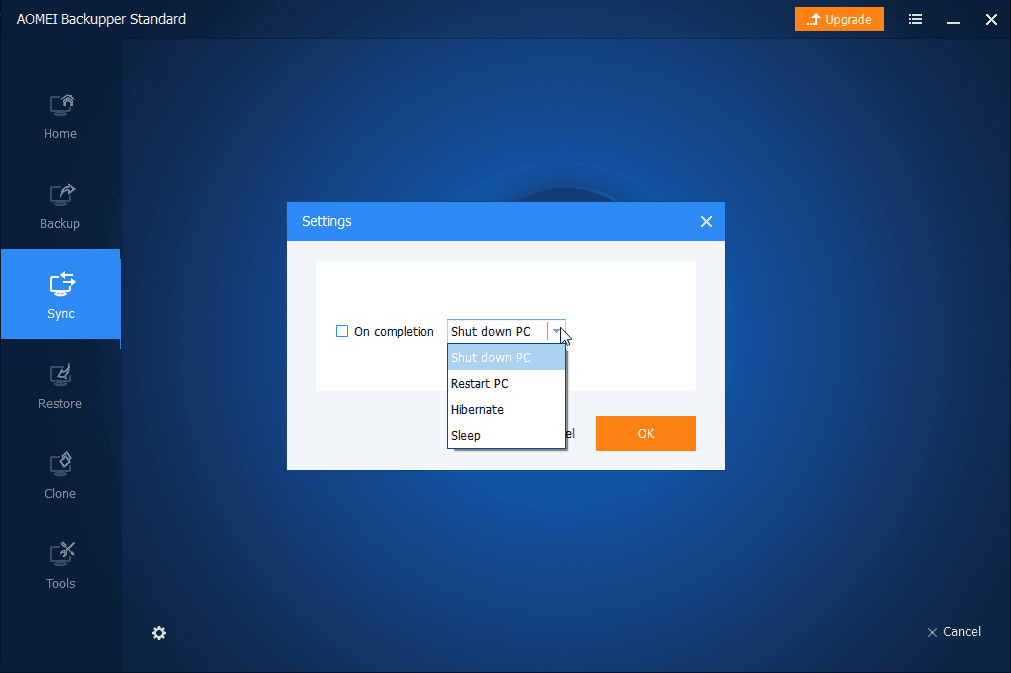 With the help of best file sync software - AOMEI Backupper Professional, you can perform file sync during system without losing data and it will help you shut down PC automatically when the sync task is completed. The sync destination can be any storage including the cloud storage like OneDrive, Dropbox, Google Drive etc.

Also, you can sync files during user logon, user logoff, system startup, or use other schedule settings, such as, daily/weekly/monthly schedule sync, USB plug in etc.

In addition, it's still a professional backup and restore software for Windows, you can use it to backup system/disk/partition/file, schedule backup per day/week/month, create incremental and differential backup, dissimilar hardware restore, and more.