If you get stuck downloading Windows Update in Windows 10/11, try following methods to fix it or reset Windows Update components. Also, there are some effective tips if you receive serious errors after upgrading.

Installing Windows 10 /11 updates allows you to explore new features, handle new security threats, and improve system performance. One of the most recently discussed major feature updates is known as "Sun Valley 2", or version 22H2. For Windows 10, there are any significant differences between 21H2 and Windows 10 22H2. For Windows 11, this update aims to restore support for drag and drop, improve Start menu customization settings, etc.

But you may also encounter problems such as unable to search for new update, stuck in download process, or eventually failed to install it. In these cases, you may need to reset Windows Update. Another related scenario is that you receive system errors after installing an update, and in severe cases you can't even start the computer. At this point you may want to rollback or uninstall the update.

How to solve these problems? Here's a comprehensive tutorial.

Usually you can check and download new update in Settings > Update & Security > Windows Update. But if you encounter problems like Windows Update stuck, you can try following methods to fix or reset it.

Can you reset Windows Update with a specialized tool? Well, there’s one called Windows Update Troubleshooter. It’s designed to fix downloading or installing errors of Windows updates. If you receive any error during the process, you can give it a try.

1. In Windows 10, you could run it by selecting "Start" > "Settings" > "Update & Security" > "Troubleshoot" > "Additional troubleshooters" > "Windows Update" > "Run the troubleshooter".

If you can’t find the "Additional troubleshooters" option, then you can find it in "Control Panel" (view it by large icons or small icons) > "Troubleshooting" > “View all” > “Windows Update”.

2. By running this troubleshooter, you can detect and resolve problems that prevent you from updating Windows. If you are given the option, you can also “Try troubleshooting as an administrator”. 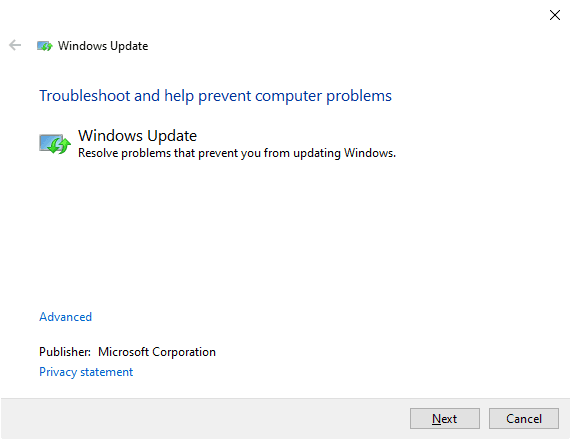 Note: If you are currently using Windows 11, you could go to "Start"> "Settings" > "System"> "Troubleshoot" > "Other Troubleshooters", scroll down to "Windows Update" and select Run option to launch the Software update troubleshooter. After that, it will start to check the default checks and fix issue during the process.

Windows Update problems could be caused by corrupted system files. For this situation, you can use Command Prompt to fix them. The frequently used commands are SFC and DISM.

1. Search for “Command Prompt” in Windows 10/11, and run it as administrator.

2. Type this SFC command and press Enter to check and fix system files:

If you can’t run SFC tool or SFC can’t fix the problem, you can also try DISM tool. The command is:

Sometimes the corrupted or overloaded cache files could also cause problems, so you can clear Windows Update cache in Windows 10/11 to reset the download.

1. Before starting, you need to stop the Windows Update service. Search for “services” on the taskbar and run it as administrator. Then find “Windows Update” from the list and “Stop” it. 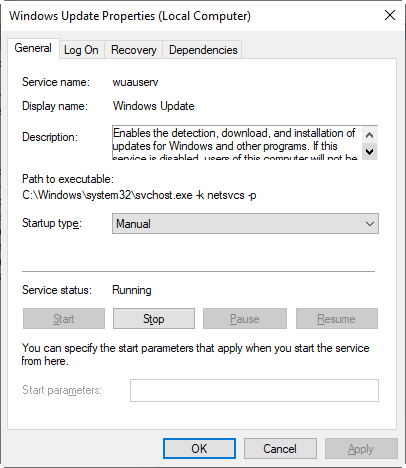 2. Go to C:\Windows\SoftwareDistribution\Download, and delete all the files in it. Thus the Windows Update cache is cleared.

3. Select Windows Update service again by the path in Step 1, and “Start” it.

Then you can try checking for update and download it again.

A powerful way to fix this kind of issue is to reset Window Update components. Normally you can implement it by Command Prompt in Windows 10/11, but the steps are rather cumbersome (see this tutorial). So instead of entering all the commands manually, you may want a Windows Update reset script to complete all the steps automatically.

Fortunately, you can find such a bat file for resetting Windows Update components.

Download the bat file from this page and follow the guide to run it. Thus most of Windows Update shall be resolved at once.

Note: You should sign in as an administrator to reset Windows 10/11 update.

Servicing Stack Updates provide fixes to the servicing stack, which is the component that installs Windows updates. So you can try installing the latest SSU manually to fix Windows Update errors.

You can find your architecture by this path: “Control Panel” > “System” > “System type”.

2. Double-click the downloaded file to install the SSU update.

Restart your computer and check if your problem has been solved.

2. Search for the version number in Microsoft Update Catalog, it will provide you download links for different architectures (x86/ARM64/x64).

3. Run the downloaded file to install this Windows update.

After finishing and restarting, your update problems should be solved.

If you successfully install an update but encounter serious system problems afterward, you can revert to the previous version as a solution. But the approaches to rollback major updates and minor updates of Windows 10 are different.

☛ For a major feature update, Windows will keep the old files within 10 days allowing you to roll back. Once this period is exceeded, these files will be deleted and you cannot revert to the previous version. So you must act fast.

The path to uninstall a major update: 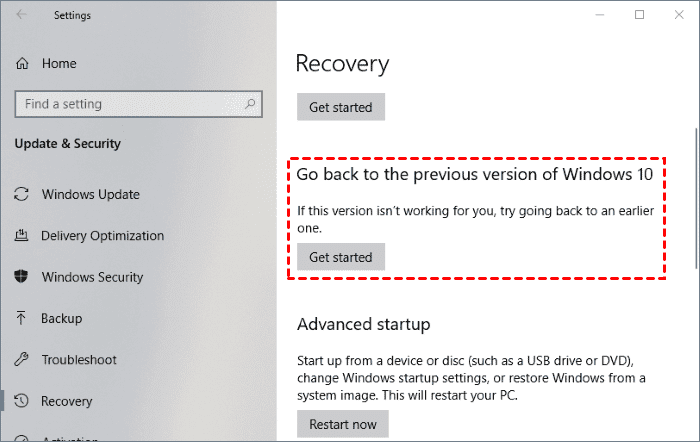 ☛ For a smaller Windows update that just fixes some minor bugs and improves system performance, you can undo it quite easily.

The path to uninstall a minor update:

In the popping-out window, you can select the update you want to remove and then “Uninstall” it. 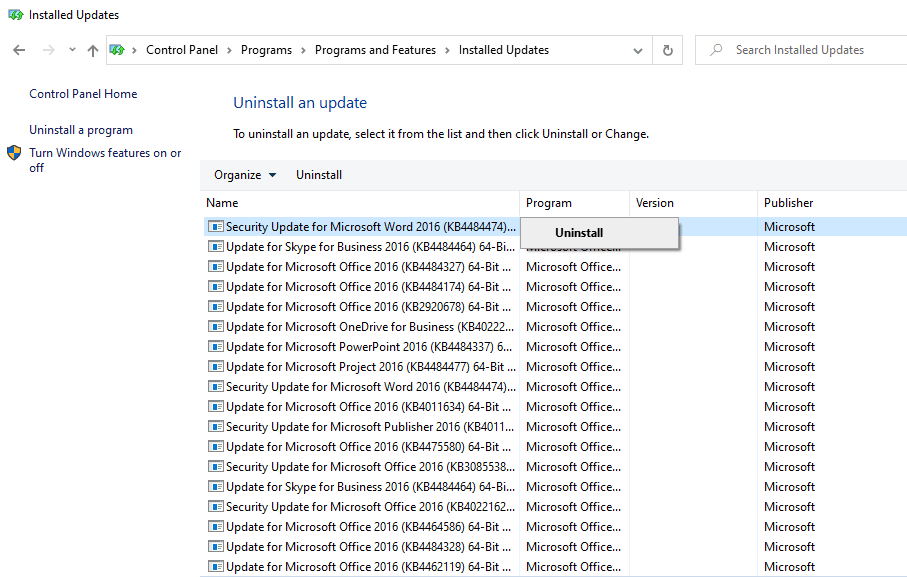 Note: If your system is Windows 11, please go to ”Start“ > ”Settings“ >  ”Windows Update“ > ”Update history“ , scroll down to the Related settings and select”Uninstall updates“. Then, in the pop up window, select  the update you want uninstall and choose Uninstall option.

*It’s possible that none of the above methods works, or you find that there are other system problems have not been resolved. For these situations, you could consider taking a more secure disaster recovery strategy as following.

Windows 10 is very powerful but also fragile. Unexpected problems happen now and then. The most recent issues about Windows update are reported after users installed Windows 10, version 22H2.

Known issues include "Some Windows devices might start up to an error (0xc000021a) with a blue screen" and "Security update for Secure Boot DBX might fail to install". We are even less able to predict what the consequences of the next update will be.

In addition to update problems, there can be many other system errors caused by various reasons. If you don't want to go through the trouble of troubleshooting them each time, the best thing to do is to develop a good backup mechanism. This is also true for Windows 11.

Simply put, you can set up a regular system backup task at once so that if something goes wrong, you can quickly restore your system to its previous state of operation. In this case, AOMEI Backupper Standard could be a good choice.

In case the PC fails to boot due to system errors, it’s also a good idea to create a bootable media with AOMEI Backupper. Thus you can boot the faulty computer into WinPE and perform system restore as normal.

In advanced editions like Professional, you are also allowed to restore system image to another computer, or set up a scheme to auto delete old backups.

What you could do for OS and data protection:

◉ Launch the software and go to Backup tab to create a scheduled System Backup task. It’s recommended not to store system images on the local drive.

◉ Go to Tools tab and use Create Bootable Media tool in case of boot failures.

How to restore Windows 10/11 to an earlier normal state:

2. Choose Restore this system backup. If the drive letters and folders have changed, please tick Restore system to other location and specify the path you want.

The Standard edition supports restoring system image to new hard drive on the same PC. If you want to restore system image to another computer with different hardware, please upgrade to Pro edition and tick Universal Restore feature.

3. Confirm the operation and Start Restore.

When you fail to download or install an update, you can reset Windows Update in Windows 10/11 to do it again; When a Windows Update causes system failures and even prevent you from booting computer, you can uninstall the update to cancel all the changes. But if you want a more universal solution to solve all the system problems, you could try AOMEI Backupper.

It enables you to back up system automatically and restore to any previous version when needed. Even your computer breaks down suddenly, you can recover it by system image and recovery media on another working PC.

Not only backup, this software also includes disk clone feature to help you migrate OS and all the data from a hard drive to another. So you can easily transfer Windows 10 from SSD to another, clone hard drive in Windows 11, clone the entire HDD to SSD.