You can perform Google Drive Sync in Windows Server 2008 easily with the help of Google Backup and Sync or AOMEI Backupper Server. Then, which one should you use? Please read this article throughly to get the answer.

Sync files to Google Drive in Windows Server 2008 or other operating system:

Google Drive for PC has been discontinued

Google Drive is very useful, so many users are willing to sync files to cloud storage with it, sync local folder to Google Drive, for example. Below is an example.

“I have installed Google Drive on Windows Server 2008. When I login to the server, Google Drive starts automatically and synchrnoizes files, pulling changes down from the cloud. All good so far.

However, I would like the sync to run even if I am not logged in. Is there any way to start the sync process automatically, maybe as a scheduled task?

I have other jobs on the server which distribute the files by FTP so I would like the server copies of the files to be up to date.”

Sync files with Google Backup and Sync in Windows Server 2008

1. Download Google Backup and Sync from website and install it. Then, open this drive by clicking the Google Drive icon on the taskbar, click Get Started to backup and sync files with this software.

3. Here you will see a pop-up window that asks you to backup files to Google Drive continuously, click "GOT IT".

Note: By default, Backup and Sync will back up files and folders with all kinds of file extension. If you just want to backup files with certain file extension, you can click "Change" at the right side of CHOOSE FOLDER to exclude the file extension you don’t need.

3. Here you will be asked to sync files from My Drive to a folder on this computer, click  "GOT IT".

After that, you can select "Sync My Drive to this computer" and decide sync everything or only these folders. Then, click "Start" to backup or sync files with Google Backup and Sync.

After syncing, the Google Drive folder will be kept in your local computer. Also, the local folder will be synced to cloud storage, you can go to "Computer" > "My Computer" to check if all the folders are synced successfully.

Now, you may successfully sync local folders with Google Backup and Sync in Windows Server 2008, 2012, 2016, etc. It’s amazing. However, some users complaint about “Google Backup and Sync not working” and it just throw out error messages, including, “an unknown error has occurred”, “connection failure”, “unable to complete sync”, etc.

Then, is there any better way to perform Google Drive Sync in Windows Server 2008？The answer is YES, please keep reading below to learn more.

If you don't want to experience these annoying errors mentioned eariler or just want more advanced features, you can consider using a professional file sync software, AOMEI Backupper Server, for example. It supports 4 sync solutions and all the server operating system, including Windows Server 2008(R2)/2012(R2)/2016/2019/2022, etc. Learn them below and choose one of them per your needs.

If you don't set any schedule settings, this will be a single backup task from one directory to another, no changed files will be included(except for Real-Time Sync).

If you need to keep your data up-to-date, please set schedule sync settings, such as, daily, weekly, monthly. Also, you can sync files during shutdown with event trigger, or sync files between computer and flash drive with "USB Plug in".

For more useful features, download this software to have a try. If you want to sync files on any computer without installing this software every time, you can could consider using AOMEI Backupper Technician or TechPlus to create a portable version of it.

Here I will take Real-Time Sync as an example to perform Google Drive Sync in Windows Server 2008. Because it's the most powerful feature to keep track of changes. Also, you can use the other 3 sync solutions. 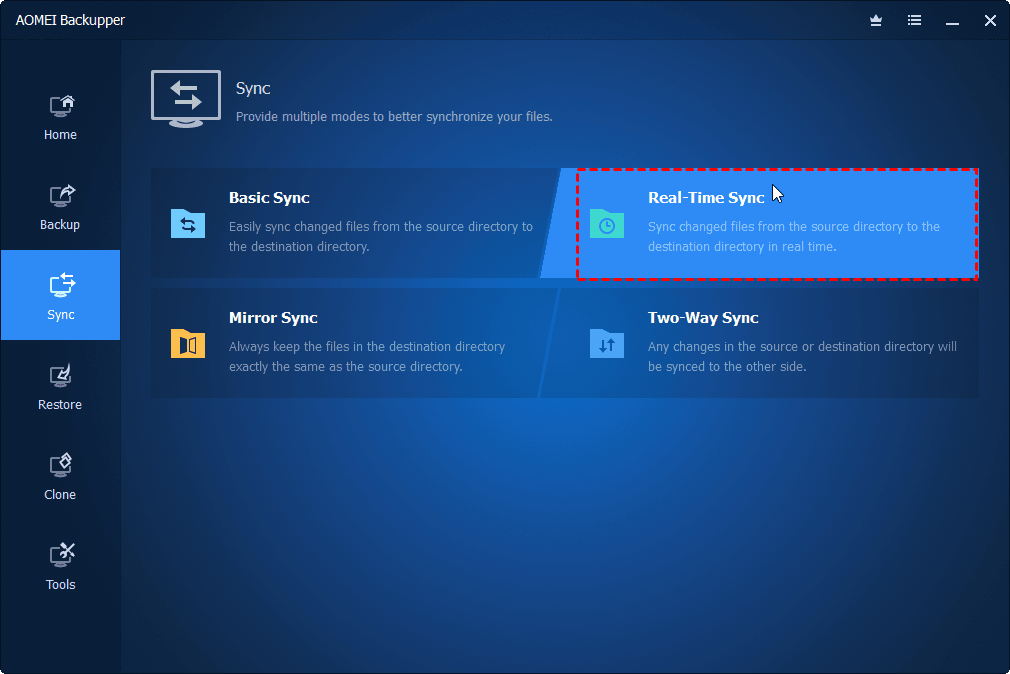 Note: The core of Real-Time Sync is one-way file sync, which only sync any changes in real time from source directory to destination. If you want to be sure the changes in both sides are synced to the other sides, you could use "Two-Way Sync" feature.

2. Click "Add Folder" to select local folders on your computer. 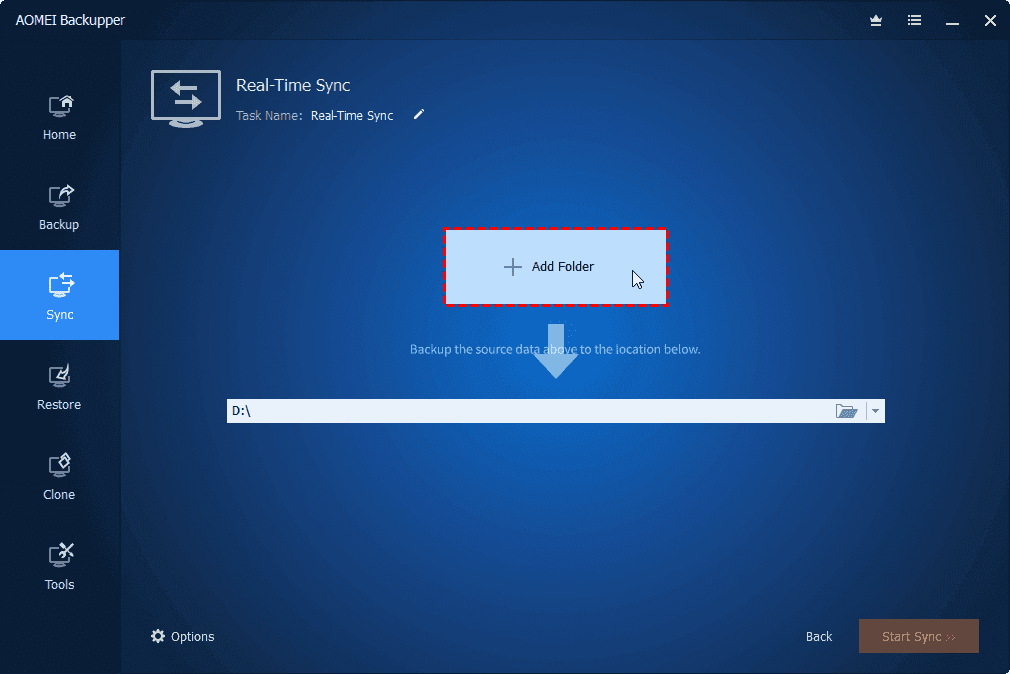 3. Click the inverted triangle icon and then choose "Select a cloud drive". 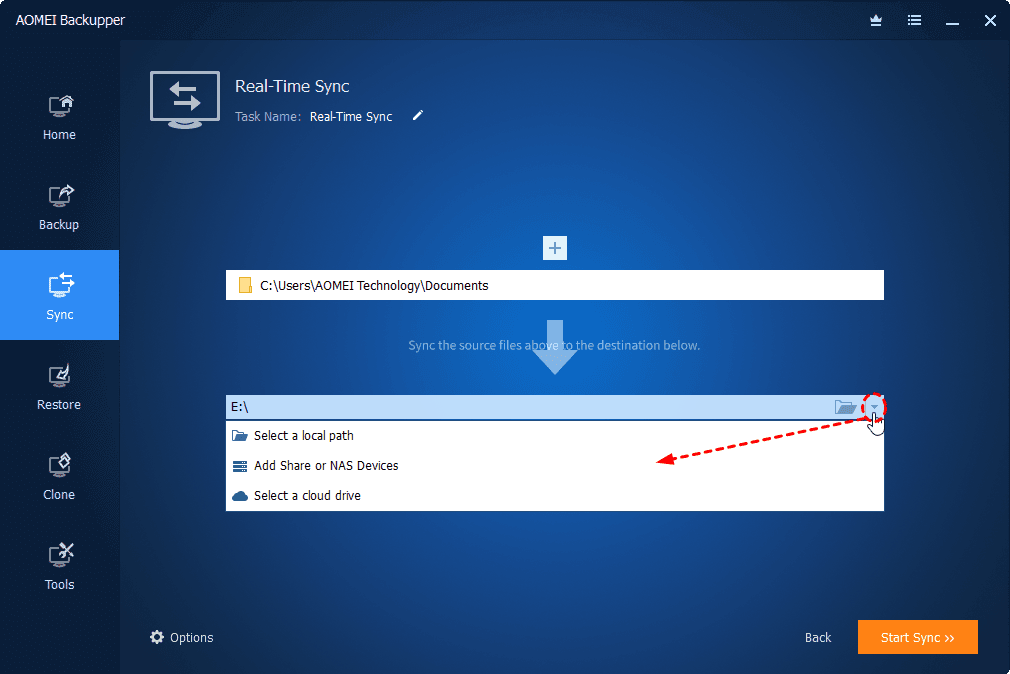 Then, you will see the Select Cloud window and all of your cloud drives will be listed here. Choose "Google Drive" and click "OK". 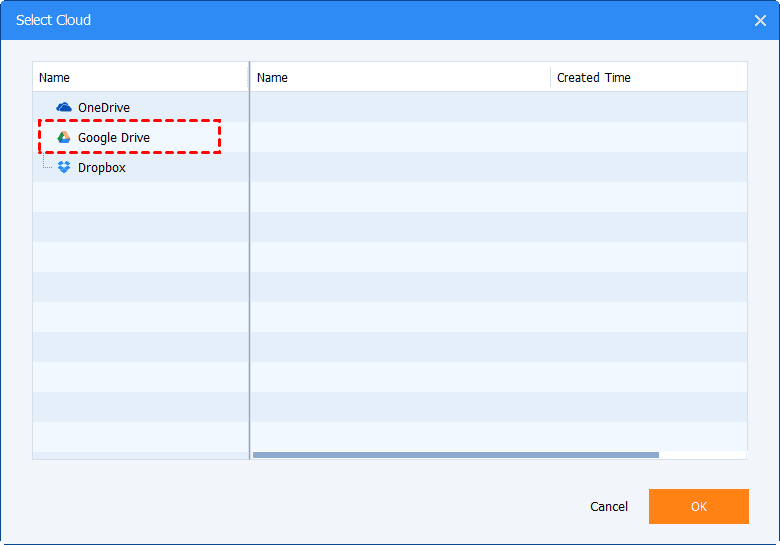 Note: To sync local folder to Dropbox or OneDrive, click the corresponding cloud drive as instead.

4. Confirm the folders you want to sync and the destination to store them, click "Start Sync". Then, you can access these files on internet using any computer after the process is 100% completed. 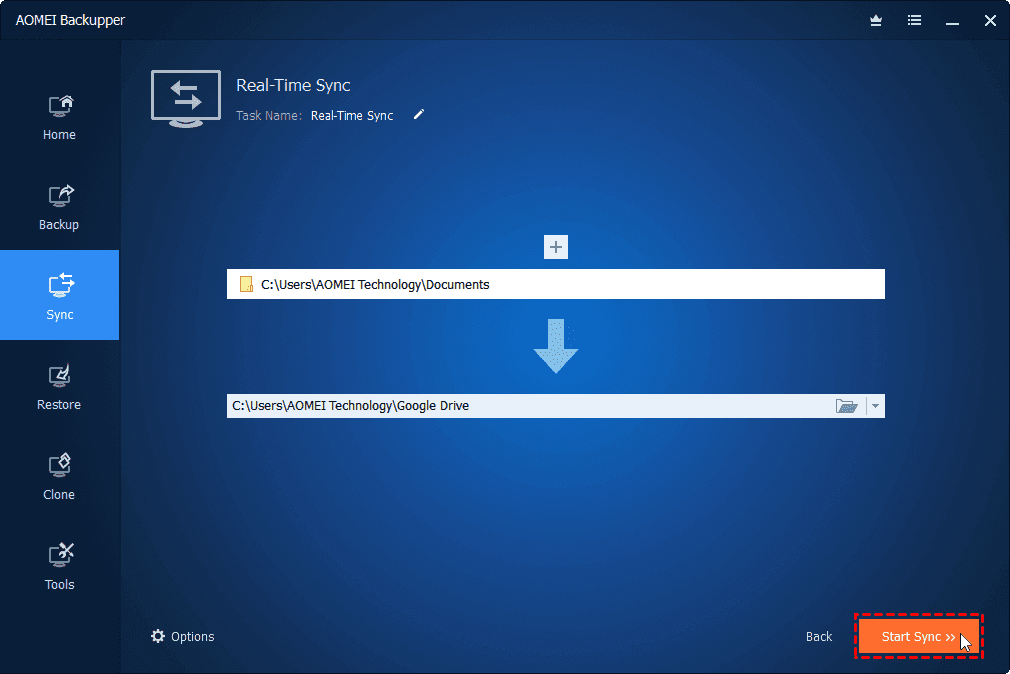 Google Drive has been stopped, so you’d better use the alternative software, like Google Backup and Sync, or AOMEI Backupper Server. Both of them can help you perform Google Drive Sync in Windows Server 2008.

But if you don't want to solve the annoying problem when sync Windows Server with Google Backup and Sync or want more advanced features, such as, Real-Time Sync, Mirror Sync, Schedule Sync, File Filter, etc, AOMEI Backupper Server will be a better choice. Also, it allows you to sync local folders to multiple storage device, such as,  Google Drive, Dropbox, OneDrive, NAS, external hard drive, etc.

Besides, AOMEI Backupper Server is still a backup and restore software, which can help you backup files, partitions, system, or entire disk and restore your computer or data after something unexpected happens.