How to Move Hard Drive to New Computer in Windows 11

Transferring Hard Drive to a New PC in Windows 11

“Is there a way to transfer my data that's in my boot hard drive into a new computer that I will be buying soon? Or maybe just transfer the hard drive itself into the new computer? I'm trying to save time and avoid reinstalling operating system, programs and games.” 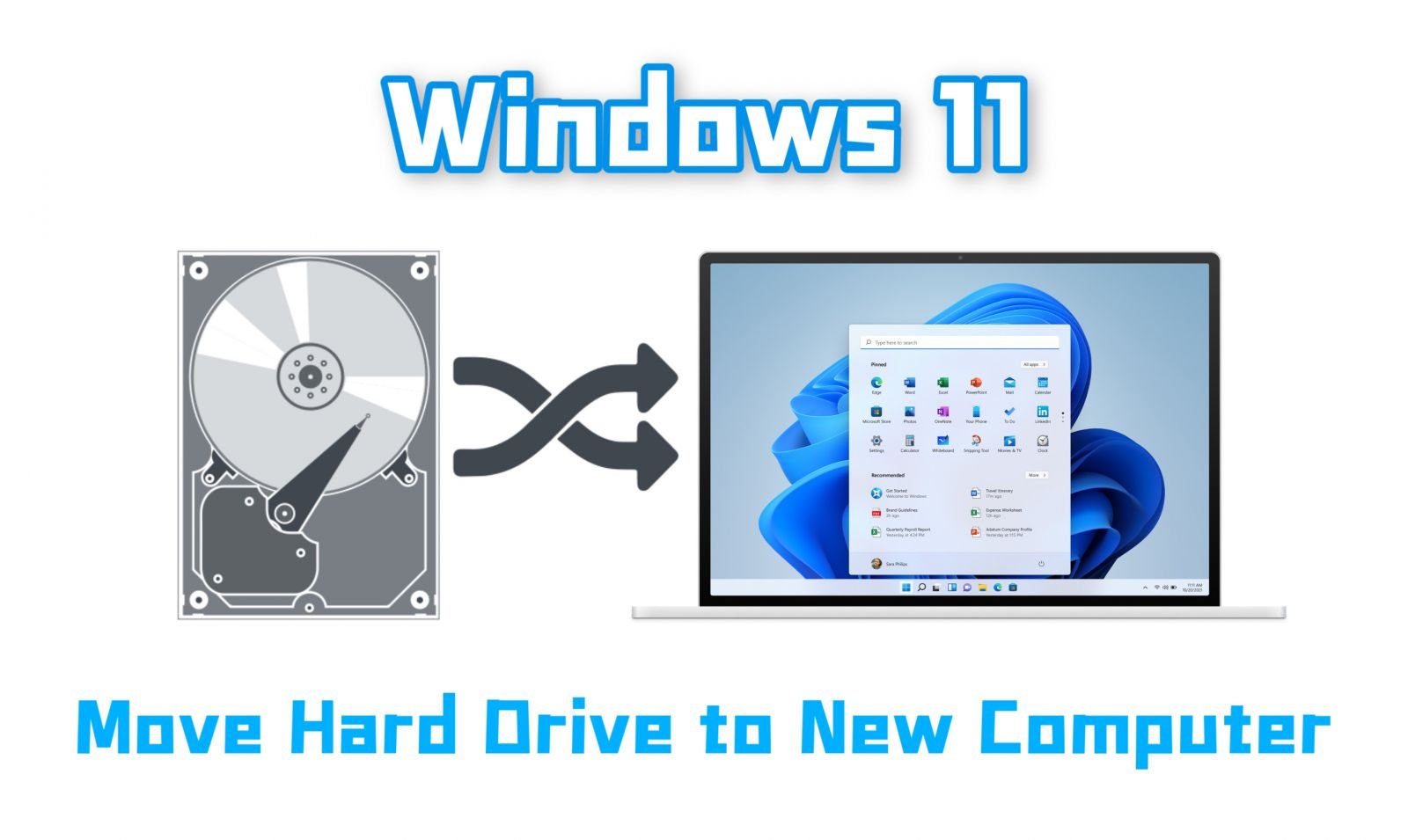 As we all know, Windows 11 will start to become available on October 5, 2021. Windows 11 switches up its look with a new Start menu and rounded corners, but it also includes lots of productivity upgrades, including Snap Layouts for running multiple apps at once. Windows 10 users can upgrade from Windows 10 to Windows 11 for free as long as they meet the minimum system requirements, or they can download Windows 11 ISO file on the official website to install Windows 11 on their computer.

Notes on Moving Windows Installation Drive to a New Computer

Adding old hard drive to new computer saves a lot of time and effort compared to a fresh installation. Because when you move the hard drive to a new computer, you don't need to reinstall any applications, drivers or copy data, everything will be moved at the same time.

Moving Windows 11 OS to a new computer is completely different from cloning Windows 11 hard drive on the same computer. There are many important factors that require our attention. There are two points below.

There are no unique licensing requirements for Windows 11 beyond what is required for Windows 10 devices. As we all know, there are typically 3 different types of Windows licenses: Retail, OEM and Volume Licenses.

Hardware can be defined as the physical components that a computer system needs to function. When moving a Windows installation, you must consider potential hardware compatibility issues. The most important problem is system driver issue.

If your new computer has the same hardware as your old computer, you can add the old hard drive in the new computer and use it without worry. If they are different, some problems may arise. Boot failure caused by lack of system drivers is the most common problem.

In fact, Windows does not support moving an old hard drive to a new computer with dissimilar hardware. You can turn to professional migration tool—AOMEI Backupper Professional Edition. With this powerful software, you can move hard drive to new computer in Windows 11 without any hardware or license issues. It can be used in Windows 11/10/8.1/8/7/Vista/XP (both 32 bit and 64 bit). Let's take a look at its outstanding features.

✪ Universal Restore: (also Dissimilar Hardware Restore) It allows you to easily restore system image of one machine to another that has dissimilar hardware and boot normal. You can use this feature to avoid hardware incompatibility issues.
✪ Four Backup Methods: It provides System Backup, File Backup, Disk Backup, Partition Backup. You can choose one to protect your data or system as per your needs.
✪ Three Clone Methods: It involves Disk Clone, System Clone and Partition Clone. You can easily move hard drive to new computer with the same hardware using its Clone feature.

With it, you can transfer the hard drive to a new computer without reinstalling Windows, and you don’t have to worry about the new computer being unable to boot anymore. Download the free trial of AOMEI Backupper Professional Edition and experience the powerful functions now!

Next, I will show you how to use AOMEI Backupper to move hard drive to new PC in two different situations.

Step 1. Connect the old hard drive to your new computer as the second drive and make sure it can be detected.

Step 2. Install AOMEI Backupper Professional and launch it on your new computer. In the dark-blue interface, click Clone -> Disk Clone.

♨ Tip: To clone only system, select "System Clone". To clone a specific partition of a hard disk, select “Partition Clone”.

Step 3. Select the old hard drive as the source disk (here is disk 0) and click Next.

Step 4. Select the hard drive on the new computer as the destination disk and then click Next.

Step 5. Confirm all your settings and click Start Clone. 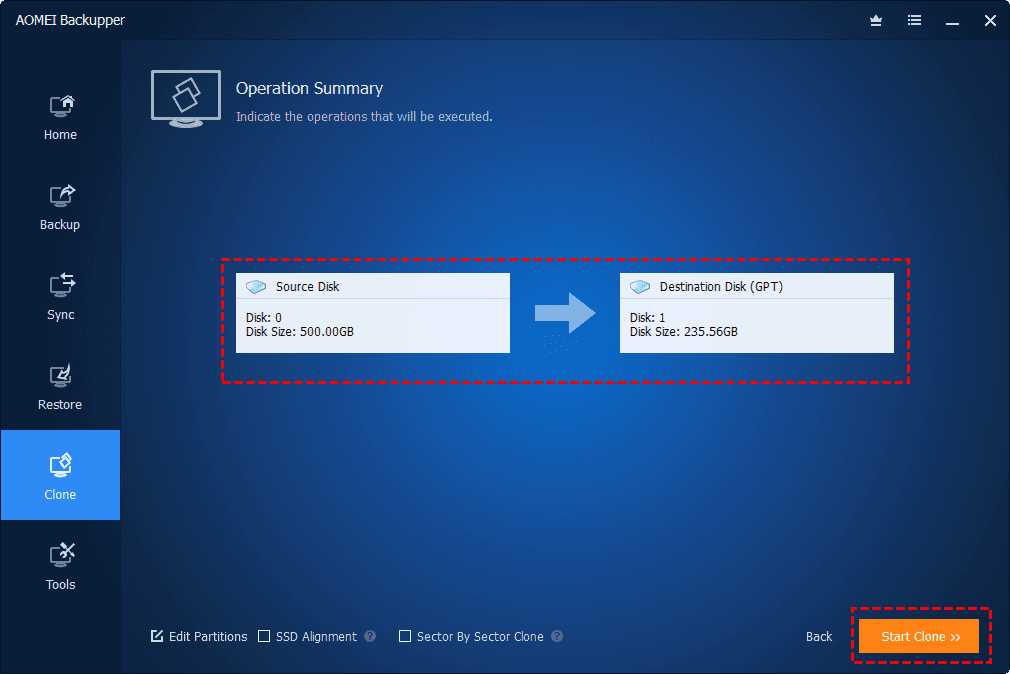 Tips✍:
♨ SSD Alignment: If your hard drive on the new computer is an SSD, it’s recommended to check this option to optimize its performance.
♨ Sector By Sector Clone: It will clone all the sectors on the source hard drive, even if the sector is blank or it is a logically bad sector. Thus, the cloned drive will keep exactly the same as the source drive.
♨ Edit Partitions: It allows you to edit the size of the partitions on the destination disk.

After cloning, you can boot computer from the internal hard drive on the new computer, see if all your content is intact.

How to move Windows 11 to another computer with dissimilar hardware? It's suggested using "Universal Restore" feature in AOMEI Backupper. Because it can solve the compatibility issue of different computer. You need to do some preparatory work.

✿ Create a disk backup or system image of the old hard drive. The backup image must be saved somewhere the new computer can access flexibly. This software supports different storages such as NAS, HDD, SSD, etc.
✿ Create a bootable CD or USB with AOMEI Backupper to boot your PC if your new computer is a machine without anything installed (a barebones machine).

Then, if you have created a disk backup of your old hard drive, follow detailed steps to transfer Windows 11 hard drive to new computer.

Step 1. Boot the new computer up using the AOMEI bootable media you created before. It will bring you to the main window of AOMEI Backupper. Then click Restore.

Step 3. In the “Image Information” page, select the option Restore the entire disk and then click Next.

Step 4. Select the hard drive on new computer to store the disk image, and then click Next.

Step 5. In the “Operation Summary” page, tick Universal Restore option to ensure the system is bootable after recovery. Click Start Restore to begin the process. 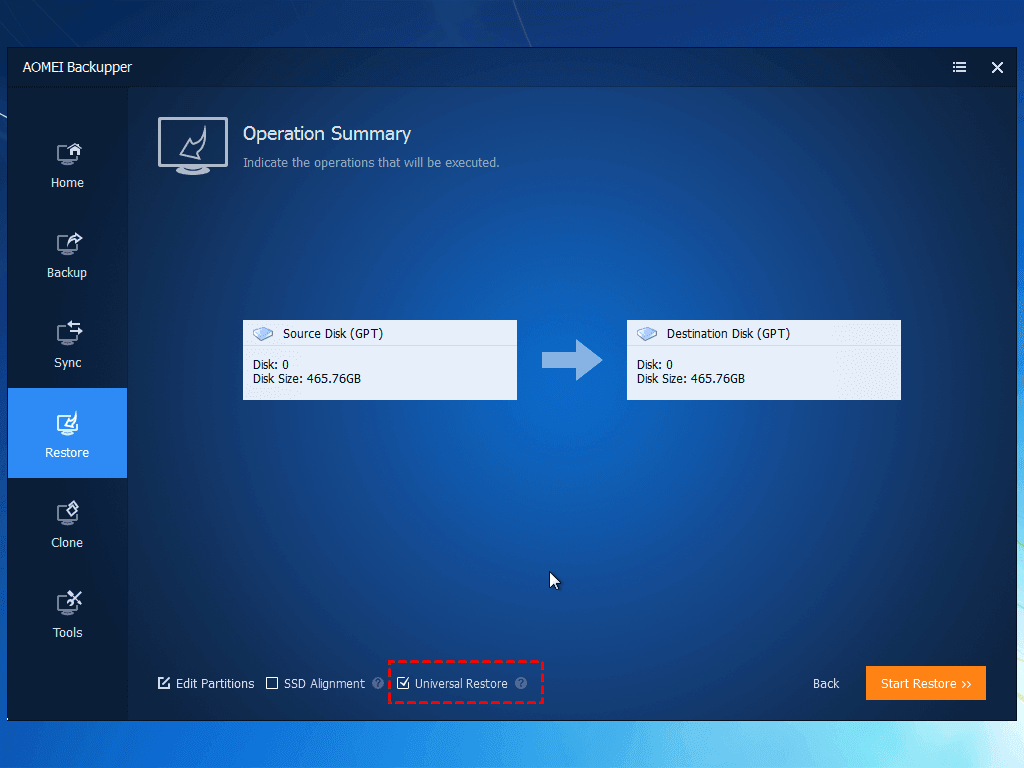 It’s easy to move hard drive to new computer in Windows 11 via AOMEI Backupper. And with its help, you will no longer encounter the hardware compatibility issues. You can save a lot of time and energy since it will help you move everything on the hard drive to the new computer easily and quickly.

In addition, it’s the best alternative to many backup and cloning software, such as Acronis True Image, Win32 Disk Imager, Cobian Backup, etc. It can solve the problem of “Acronis True Image hangs when cloning” with just a few clicks. Try it to protect your new computer right now!