Creating Windows 10 system image on USB flash drive can effectively prevent Windows 10 from unbootable due to system corruption or hard disk failure. How to backup Windows 10 to USB drive? The third party backup software could be the best answer.

Windows 10 system image is a snapshot of Windows 10 system, including operating system, programs, user files, which can restore Windows 10 to an earlier normal state in case of something awful things happen such as windows can’t boot, etc.

Commonly, hard disk has a recovery partition when Windows 10 installed, around 450MB, which stores the OS, drivers, applications, and default settings for operating system repair. Or your PC might have a recovery image designed for computer reset or refresh, which is typically 3 to 6 GB in size and stored on an independent recovery partition. The recovery partition can troubleshoot and fix the system problems, then restore your computer.

It’s necessary to create a Windows 10 system image on flash drive to prevent system from corrupting or hard drive failure and so on. Therefore, you can use Windows 10 built-in tool-Backup and Restore (Windows 7) to create an image backup for Windows 10. 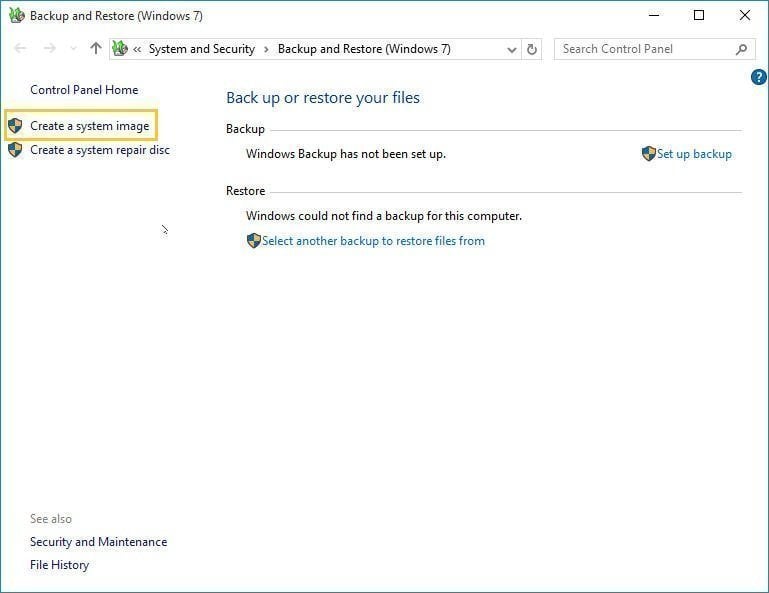 2. Click the “Create a system image” option, and then hit “Next”.

3. Select the USB flash drive to save the Windows 10 backup. Then click “Next”.

Tips: Make sure you have plugged the USB flash drive into the computer; the program will detect the device automatically.

A Better Way to Backup Windows 10

Here, we will introduce the detailed steps with AOMEI Backupper for you; you will have a full concept about backing up Windows 10 to USB drive.

1. Connect your USB flash drive with your computer. Download, install and launch AOMEI Backupper. On the main interface, select “Backup” at the left panel, and then choose “System Backup”.

Tips: Make sure the USB drive can accept the system image for Windows 10; you’d better prepare a 8GB USB drive.

2. At the next window, edit the “Task Name” to distinguish from other backups if you want to. Then, select the USB flash drive as destination location to save the Windows 10 system image.

Tips: In the “Step1”, the program will select the partition associated with Windows 10 system files automatically.

3. Click “Start Backup” to create a system image for Windows 10.