After upgrading to Dropbox Plus, with 2TB of space, I just transferred a lot of files and folders into my Dropbox. I thought they would automatically be online-only, but when they started to sync they have almost totally filled my hard drive. I cannot change anything to "online-only." That option is not available to me. I have tried it after Pausing Sync and that did not change anything. And only have selective sync available under preferences, please help, thanks in advance.

Sometimes, you may encounter the Dropbox Smart Sync not working issues like the user, what should we do to fix it? Don’t worry, we will explain for you.

Dropbox Smart Sync is an advanced feature that helps you view, access Dropbox files and folders from your computer, while using virtually no hard drive space. It is available in Dropbox Plus, Professional, Standard, and Advanced for individuals and business teams.

You may meet the following Dropbox Smart Sync not working problems while using Dropbox, find solutions respectively, or you can turn to a free alternative with powerful functionality and wider application range:

If you connected a personal Dropbox account, Smart Sync won't be available for that personal account. Or the Smart Sync isn’t here in your Dropbox Plus, or others.

Solution: update the desktop app and Mac app to the same as well if you just upgrade Dropbox account to Dropbox Plus, or other editions in dropbox.com.

Sometimes, you may find the Smart Sync online only not working, because the smart sync files downloaded unintended. 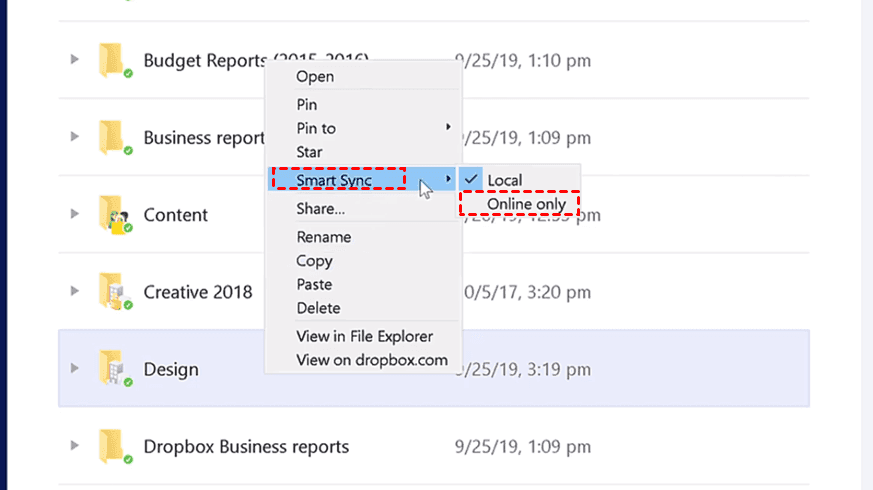 If your Dropbox is full or show low disk space due to the Dropbox documents. You have to free up space.

Solutions: The two ways: Selective Sync and Delete files, could help you to free up space. Here we are going to show you about the selective sync to free up space for you hard disk. 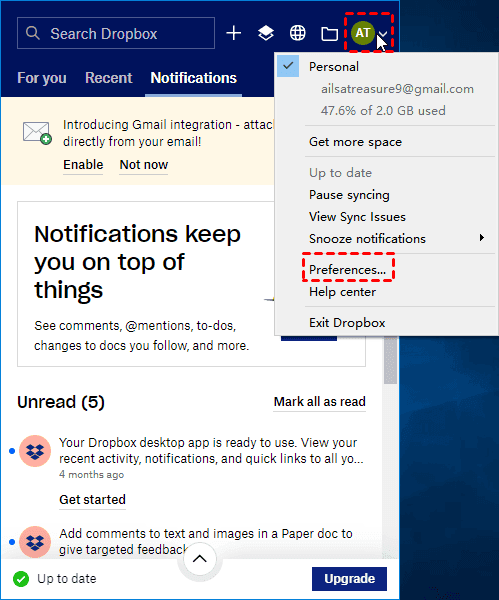 2. At the Sync tab, press Selective Sync and then Uncheck the folders and files that you would like to remove from your computer but still on your dropbox.com. Press Update to confirm. 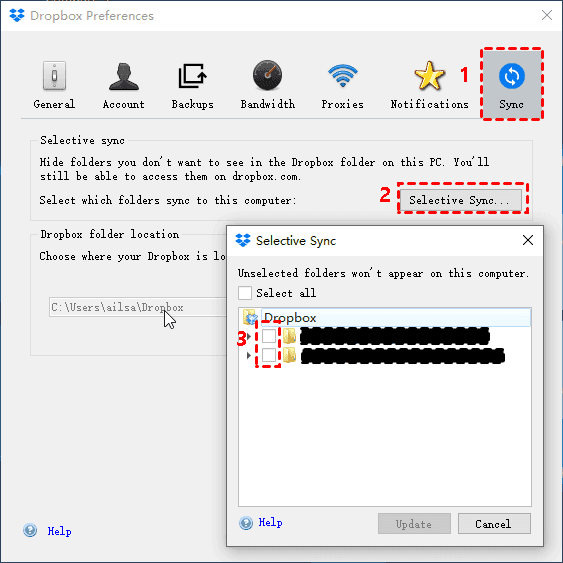 Solution: Set the Smart Sync to Local. Here are the steps: Right click the file or folders, select Smart Sync, and then choose Local, open the files or folders when it’s downloaded.

And there are some reasons should be responsible for this issue: Some updates happened to the Dropbox; Lack of Windows security updates; Antivirus or Security software maybe blocked the Dropbox; Something required for Smart Sync is not installed or running properly; Software conflicts.

1. Add Dropbox to White-list in Antivirus or Security Software.

5. Disable all running software to fix the conflict (like HIBUN software, etc.).

Besides, another issue like Dropbox not syncing maybe disturb you while syncing data to Dropbox. First ensure your computer, phone, tablet is connected to Internet, signed in the same Dropbox account, and the files or folders are located in Dropbox folder. If all is right, please refer the following solutions:

2. Do not sync some system files and temporary files like desktop.ini, thumbs.db, *.tmp, ~file, etc.

If you have problems with sync files to Dropbox with Smart Sync, you may want to try a powerful file sync software - AOMEI Backupper Standard. It is designed for Windows computers (Windows 11, 10, 8.1/8, 7, Vista, XP) to sync files to cloud (like Dropbox, Google Drive, OneDrive, Box, etc.) with simple clicks. You can also choose other devices as source or target location, such as internal/external drive, USB flash drive, NAS and network share.

It’s highly recommended by million of users over the world due to its reliable synchronization, intuitive interface and outstanding performance. And now you can simply download this freeware to enjoy the file sync feature:

You could enjoy the following sync features:

1. Schedule sync. It allows you sync files to Dropbox or other clouds via daily, weekly, monthly, USB plug in, etc.

2. Sync Settings enables you to comment the sync task to differ from others, enable email notification to get the SMS or email alert after the sync finished, run specified program before the sync, etc. 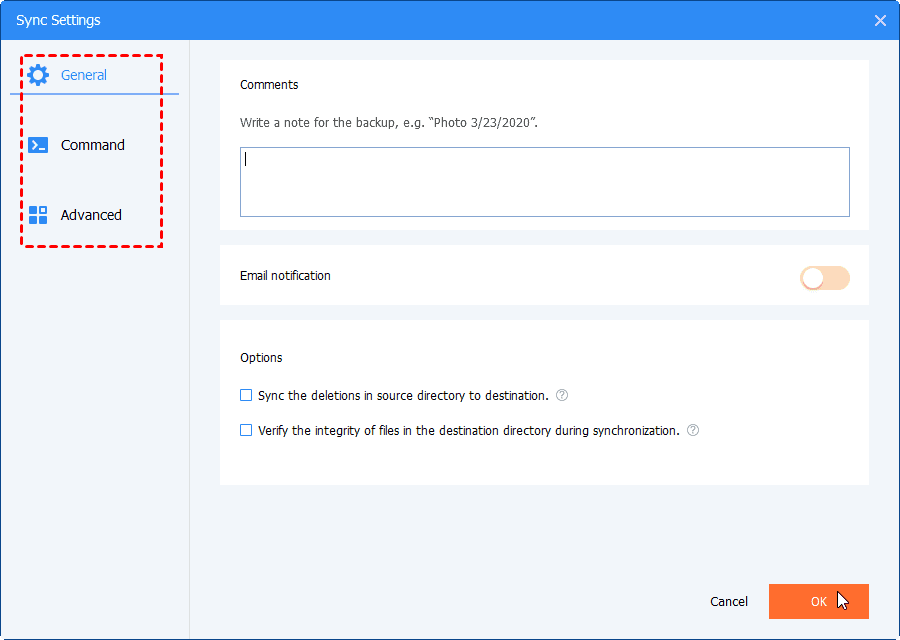 3. One-way sync function can greatly protect the data on the source path.

5. Event Triggers Sync: you could trigger the sync task by the four events: user logon, user logoff, system startup, system shutdown. And you could sync files to Dropbox without occupy your working time.

The last two are premium features, please upgrade to AOMEI Backupper Professional or other advanced editions to enjoy.

Besides Dropbox, you can also sync your files to Google Drive, OneDrive and other cloud drives using the above method. But almost all of these cloud drives only provide a few GB of free storage space. In this case, I suggest you can backup your files directly to AOMEI Cloud. After you sign up for an AOMEI account, it will provide you with 1TB of free storage for 15 days. And the process is automatic, so you don't need to worry about losing your data because you forget to backup. 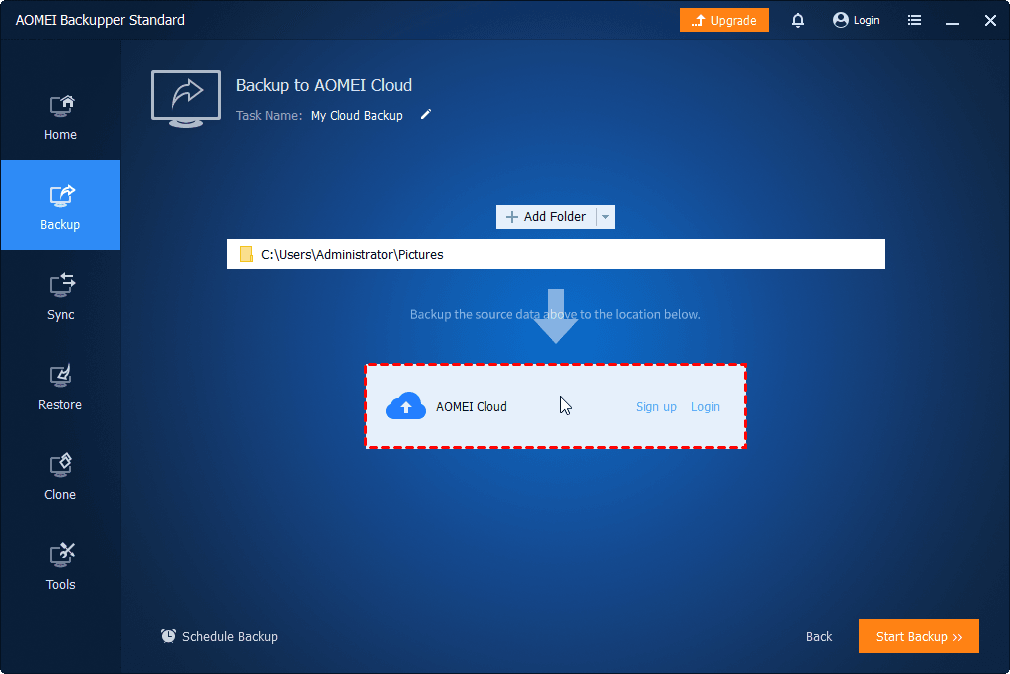 If you meet the Dropbox Smart Sync not working problem or Dropbox not syncing files, you could try the best Dropbox alternative - AOMEI Backupper Standard to sync files to Drobox easily to safeguard all your files and folders. You can even sync open files without efforts.

Besides, AOMEI Backupper is also backup and restore software, which allows you to backup data to an image file to anywhere else you specified, create system backup for Windows PCs to prevent system boot failure, backup entire hard disk to other place just in case you need to restore everything, etc.

You May Also Like
How to Sync Local Folder to Dropbox? (3 Ways Included)
Can I Backup Dropbox to External Hard Drive Safely?
2 Ways to Backup Specific Folders That Change Often in Windows 10
Dropbox Not Syncing in Windows 10 - Fix or Replace It!