You can use both cloning and imaging method to clone system to dissimilar hardware without booting issues, and it depends on the operating system you are using and your purpose.

Quick navigation for cloning or restoring to dissimilar hardware:

When should I perform dissimilar hardware clone or restore?

In some situations, you need to clone system with dissimilar hardware. We summarize the most common situations in the following:

Best software to clone or restore system to dissimilar hardware

Searching this keyword “clone to dissimilar hardware” online, you may see 2 common ways, namely using clone or backup and restore. Both of them can help you migrate OS or disk to another computer with different hardware, such as motherboard, CPU, etc. At this moment, you need the best software that supports these features, AOMEI Backupper Professional.

In addition, you can enjoy other useful features during the process:

How to clone Windows 10 system to different hardware safely

Here I'll introduce you to two effective ways to clone Windows 10 system to different hardware. And you can choose them depending on the operating system you are currently using or your purpose:

Directly clone system to different hardware in the following 4 situations:

Backup and restore system to a new computer with different hardware in the following 2 situations:

And then download AOMEI Backupper Professional to clone or restore Windows 10 system to different hardware. Note that the clone feature in the free trial can only be demonstrated, so you need to upgrade to the professional version if you are in the previous 4 situations above.

Before you start to clone system to different hardware, please take out hard disk on the new computer and be sure it's recognized by the current computer. For peak computer performance, it's suggested to prepare an M.2 NVMe SSD and clone Windows 10 to NVME SSD. In this case, you need to prepare an M.2 adapter if your computer does not have two M.2 slots.

Step 2. Select the connected SSD as the destination path and click Next.

Step 3. Tick SSD Alignment to further improve the reading and writing speed of your SSD disk as well as prolong its lifespan. Then, preview the operation, and click Start Clone to clone system to dissimilar hardware. 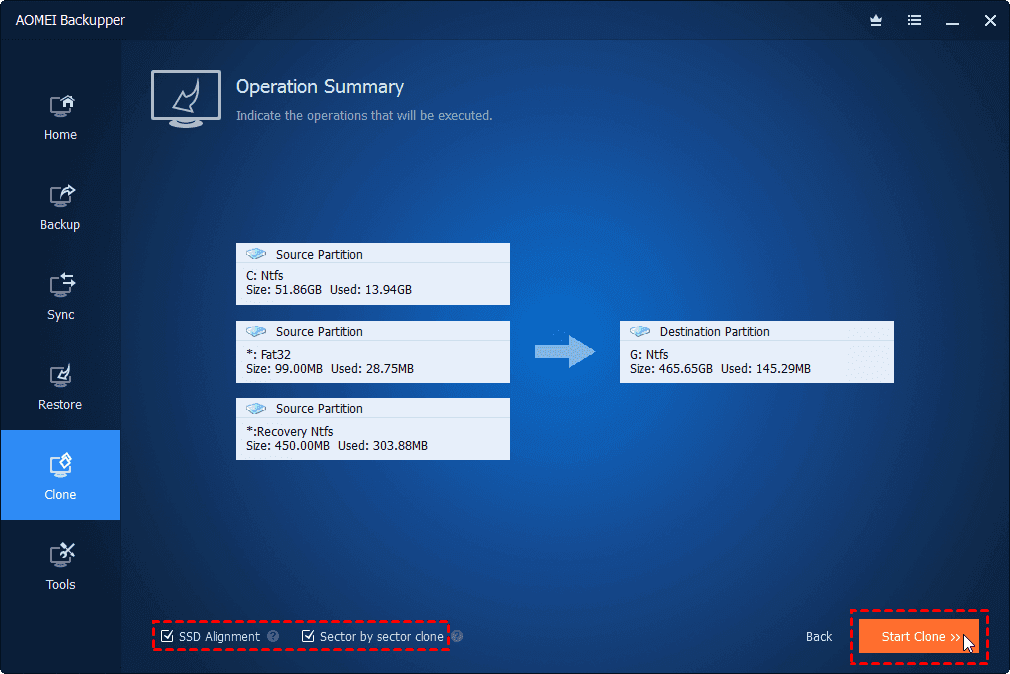 Note: You still can see "Make full use of disk space" if you clone system to a larger drive. It will allocate the unallocated space on the target disk and extend to the system partition.

Step 4. Disconnect the cloned hard drive from the current computer and then install it on the new computer. After that, start your computer and boot from it. If it does not, you need to change the boot priority in BIOS first.

Notes:
❤ You still can select Disk Clone in Step 1 if you want to clone hard drive to different hardware. It will clone entire disk, besides system partition, still including all the other data partitions.
❤ If your computer doesn't start, you still can create a bootable disk and then clone the system or disk.
❤ To clone system to multiple computers, you need to create a portable version of AOMEI Backupper (supported by AOMEI Backupper Technician or TechPlus) and run it off a removable device. You can use it on unlimited PCs or servers and don't need to install it again and again.

Except for the cloning method, you still can use the backup and restore method. It can be used on any Windows system, and focuses more on continuous data protection and batch image deployment.

Unlike using the cloning method, you need to make more effort if you use the backup and restore method. Check the following content and do as suggested.

That are all the important steps for dissimilar hardware restore. And then, you need to connect the backup drive to the new computer and restore Windows image to a different hardware.

The steps in both situations are almost the same, only the operating environment is different, one is within Windows while the other is from Windows PE. Please follow the steps below after accessing this software:

Step 2.  Select system backup and click Next. If not, please select the backup image manually by clicking the Back button and choose the Select Image File option on the previous page.

Step 3. Tick restore this system backup and Restore system to other location. Then, click Next to continue.

Step 4. Select the disk on the new computer and click Next.

Step 5. By default, the Universal Restore feature is checked if the backup image is used on a new computer with dissimilar hardware. Optionally, tick SSD Alignment to accelerate the reading and writing speed of the SSD disk. Preview the operation summary and click Start Restore to restore system to dissimilar hardware. 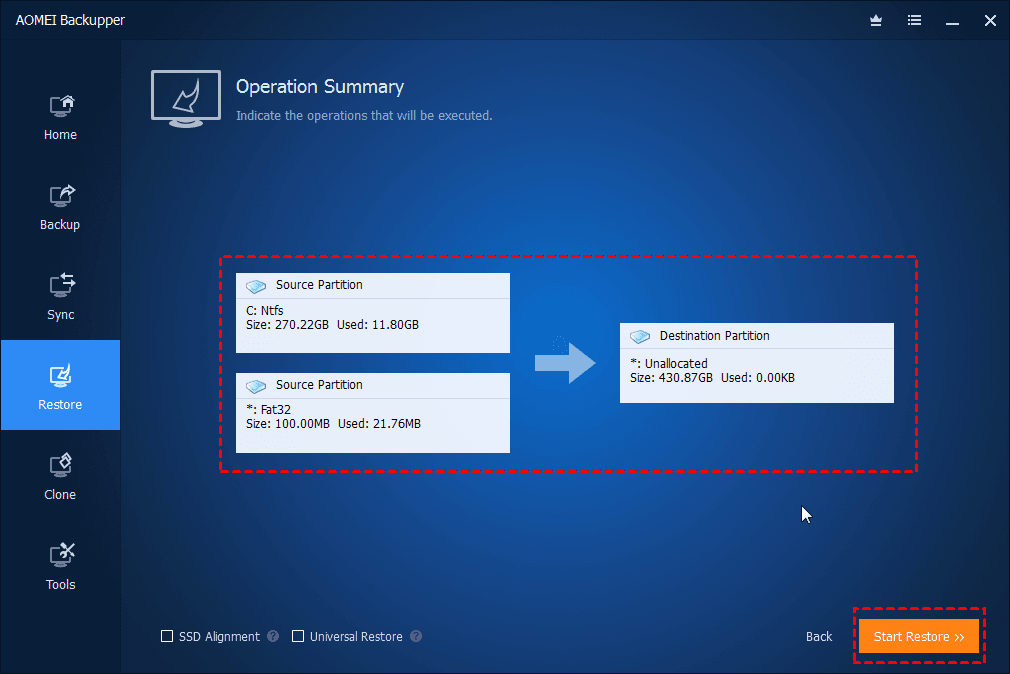 Notes:
❤ Except for improving SSD disk performance, the SSD Alignment feature is still able to further prolong the lifespan of SSD disks.
❤ To protect data continuously, you need to schedule backup Windows 10 with daily, weekly, monthly, event triggers, or UB plug in features. Among them, the last one is the easiest and fastest feature if you create a system image on USB drive.
❤ To deploy images to multiple computers simultaneously, the easiest way is to AOMEI Image Deploy (supported by technician or TechPlus edition). Similarly, you need a system image, this time is not booting from a bootable USB, but from a network, which can boot multiple computers at a time.

You can choose to clone or restore to dissimilar hardware in different situations. The previous one is easier and quick but limited to Windows 10 and 11. And it's really useful when you want to replace a laptop HDD with SSD without reinstalling Windows.

The second one is more compatible, you can use it on all Windows systems, especially when considering the long-term data protections and batch image deployment. For bare metal restore to dissimilar hardware within one company, AOMEI Backupper Technician or TechPlus edition will be a better choice.