How to Clone Windows OS to SSD Easily in Lenovo PC?

You probably know SSD performs well as OS drive, but if you don’t want to reinstall Windows manually, what’s the easiest way to clone OS to SSD in Lenovo?

Such questions are not uncommon nowadays, because as you know, many computers still come with HDDs while SSDs have better data accessing speed, hence the need to migrate OS to SSD in Lenovo laptops as well as other PCs.

Therefore, more and more people would rather move Windows to SSD no matter for greater capacity or better performance. But exactly how can you clone Lenovo OS to SSD? How to clone OS to SSD in Lenovo with ease (2 ways)?

Normally, there are two possible scenarios for Lenovo system migration:

◆ Replace the old hard drive with a new SSD
You may want to transfer not only the system but also data partitions on the disk.
◆ Use SSD as an OS drive and keep the old disk as a secondary storage
You may want to clone only OS to SSD.

No matter which case you are in, whether you're using a ThinkPad or whatever, moving Windows to SSD is not as easy as ordinary copy & paste since many complicated system files are involved.

One common approach is to install OS on the new SSD, which is time-consuming and requires an installation CD or other bootable media. Another is Windows system image backup, with which you can try to image Windows to SSD, but with a high probability of failure.

In this case you may wonder, is there a way to transfer Windows to SSD in Lenovo more directly?

Well, with the assistance of reliable software, the answer is yes. I’d like to recommend you a tool here that can clone OS to SSD no matter in Lenovo laptops like ThinkPad or other brands of PCs. It will directly make a copy of your Windows or even all partitions to the destination disk, which can greatly simplify the process of migration. And since it has both free edition and advanced edition, you can make the choice according to your actual needs.

AOMEI Backupper Standard is a freeware with complete features to protect you data. It enables you to clone an entire hard disk to another for free. That is to say, your operating system along with all the partitions on the source disk will be copied to the destination SSD at once. And with the default intelligent clone mode, only the used sectors will be cloned - this enables you to clone larger HDD to smaller SSD.

This approach is more suitable for people who wants to migrate all the data on the disk, or wants to clone Lenovo to SSD free of charge. Download it to have a try.

Step 2. Select the disk you want to clone as the source disk, hit Next button.

Step 3. Choose the SSD as the destination disk, click Next to continue.

Step 4. Here in Operation Summary, you can Edit Partition, check SSD Alignment (recommended) or Sector by Sector Clone if needed, then confirm your operation and click Start Clone to begin the process.

Edit Partition - adjust the partition size (available in paid editions).
SSD Alignment - ticking this option will accelerate the reading and writing speed for solid state drive.
Sector by Sector Clone - clone all the sectors including the blank or logically bad ones. It will take longer time than usual. Please don't tick it unless your destination disk is larger. 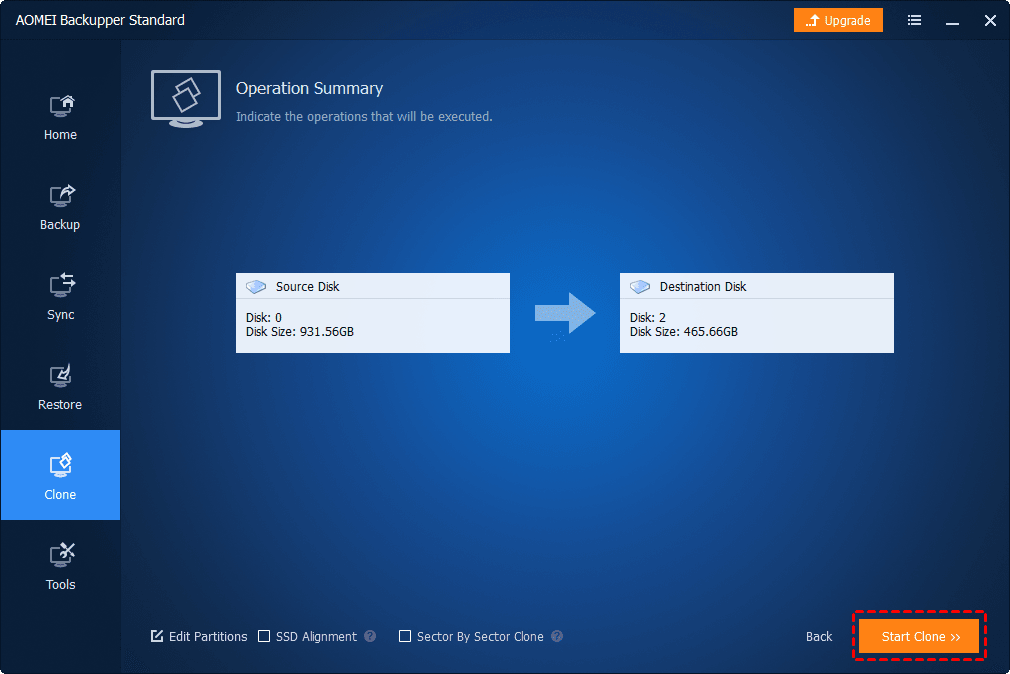 Step 5. Wait till the cloning ends, click Finish to quit the wizard.

Step 6. Restart Lenovo and enter BIOS to set the cloned SSD as the first boot disk to launch Windows.

Method 2.    Clone only OS to SSD in Lenovo easily

If you want to clone only OS to SSD in Lenovo instead of all partitions on the disk, the System Clone provided by AOMEI Backupper Professional and higher editions can be a better choice. It allows you to copy Windows to SSD or other disk within several simple clicks, while other files unrelated to system won’t be cloned.

It’s not free, but literally the most direct way.

Step 2. Your OS will be automatically selected as the source, so you only need to choose the SSD as destination. Click Next to continue.

Step 4. When the process is over, restart your computer and launch Windows with the cloned SSD.

AOMEI Backupper enables you to clone OS to SSD in Lenovo laptops and other PCs easily. Whether you want to migrate Windows 10/8/7 to a larger or smaller drive, your requirements will be satisfied through a simple and quick process. You can even clone hard drive on Windows Server with the Server edition.