This article provides users with two free ways to clone Seagate HDD to SSD without any hassle. Scroll down to get details.

Free clone HDD to Seagate SSD with Seagate DiscWizard or another software:

More about HDD and SSD

SSD (short for Solid State Disk) is a nonperishable storage which is made by solid-state electronic storage chip and consists of control unit together with storage unit including DRIM - dynamic random access memory chip.

Owing to many advantages, especially a peak performance, SSDs are widely used in military, IT industry, aviation etc. And a large amount of users want to clone Seagate HDD to SSD. Here is a quick browse table for you. 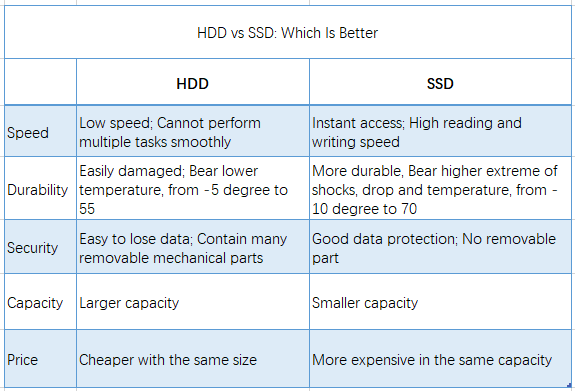 In sum, HDDs are famous for its big capacity and low price while SSDs are known as its high performance. In addition, thanks to the solid state design, without any removable mechanical parts internally, SSDs are more durable, and can bear higher extremes of shock, drop, temperature, as well as has a lower risk of data loss.

How Do I Clone Seagate HDD to SSD in Windows?

How do I clone a Seagate hard drive? Can I clone a HDD to a smaller SSD? Many users may have this doubt. As a matter of fact, Seagate hard disks come with an integrated disk cloning software, named Seagate DiscWizard, which can help you clone entire hard drive in Windows XP/7/8/8.1/10. Please note you are not allowed to clone a single partition, whether system or data partition. Meanwhile, it does not clone dynamic disk as well.

In addition, you still have another choice for Seagate hard drive clone, using a trust and reliable third-party cloning software. AOMEI Backupper Standard is a great choice, because it works well in cloning all branded disk, including Seagate, WD, Samsung, Dell etc, whether SATA, PCIe, M.2 or NVMe. It supports cloning GPT disk, MBR disk and dynamic disk, system and partition. It's compatible with all operating system, such as, Windows 7/8/8.1/10/XP/Vista.

Then, make preparations and start to clone Seagate HDD to SSD.

Step 2. Tick Automatic (recommended) clone mode so it will automatically fit the new SSD. Then, click Next. 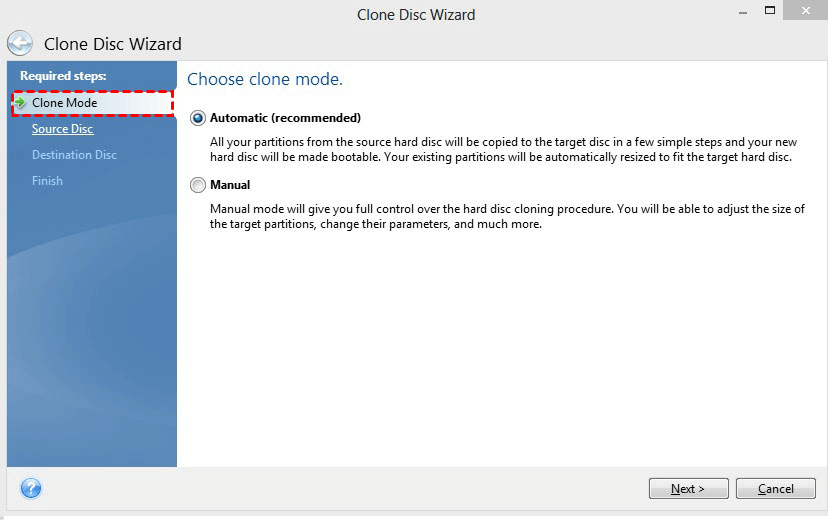 Step 3. Select old HDD as source disk and click Next. 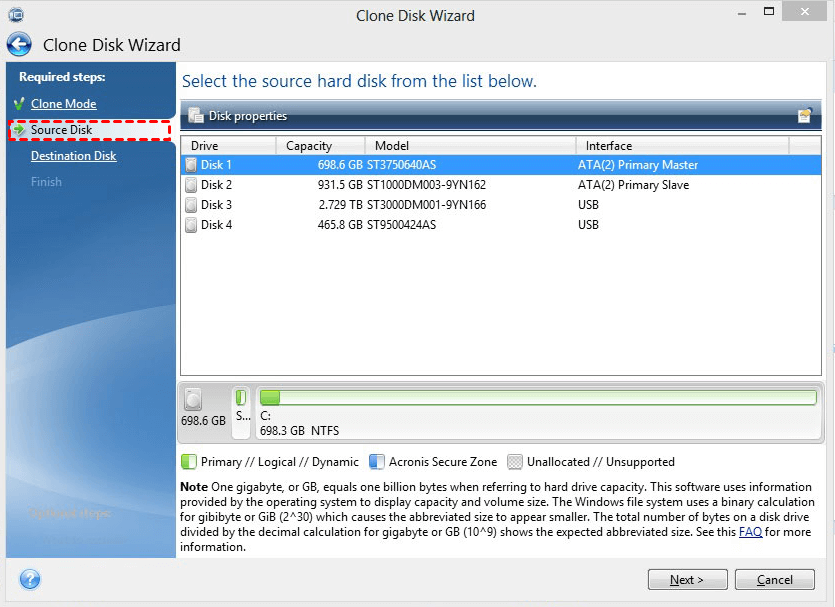 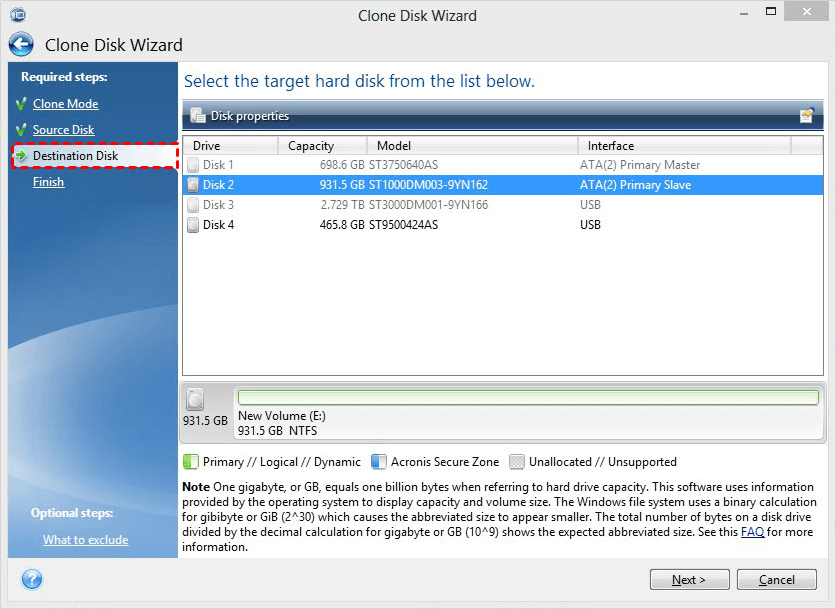 Tip: If you don't have enough budget to get a big SSD, you can choose to clone HDD to Seagate SSHD. This kind of disk combines the advantages of both HDDs and SSDs, namely, large capacity and excellent performance.

As mentioned earlier, Seagate DiscWizard clone not working sometimes. If you have problem using this software, you can turn to free disk cloning software AOMEI Backupper Standard.

Before cloning Seagate hard drive, you need to prepare according to the above preparations and connect the SSD through the SATA-USB adapter. Then, free download and install SSD cloning freeware - AOMEI Backupper Standard on your computer.

Step 2. Select the old HDD as your Source Disk, then click Next.

Step 3. Select the new SSD as your Destination Disk, then click Next. Please backup your important files on SSD, because it will be overwritten completely.

Step 4. On the Operating Summary window, check information of both disk and tick SSD Alignment to accelerate speed. Then, click Start Clone to start the task.

Notes:
◉ By default, this software only clone used sectors. If you want to clone all sectors, whether used or not, please check "Sector by sector clone".
◉ If you plan to clone disk to larger disk, it's suggested to adjust partition size of target disk with "Edit Partitions (supported by AOMEI Backupper Professional)". It has three options, including "Copy without resizing partitions", "Add unused space to all partitions", "Manually adjust partition size".
◉ The Standard edition only clone disk with the same partition style, ie: GPT to GPT or MBR to MBR. To clone MBR disk to GPT, and vice versa, please upgrade to AOMEI Backupper Professional.
◉ If your SSD still cannot contain everything on Seagate HDD after a diet, you could consider migrating OS to smaller SSD with AOMEI Backupper Professional.

It’s not surprising that many users want to clone Seagate HDD to SSD, because SSDs have better performance. Your computer can go smoothly even if you run multiple tasks simultaneously.

If your new SSD is Seagate, you can use the integrated disk cloning software, it's Seagate DiscWizard. But it's limited to clone entire disk, not including dynamic disk, system partition and single data volume. If you happen to be in these situations, AOMEI Backupper is a better choice.