"Plan to upgrade my laptop computer to SanDisk 500GB SSD to gain a new experience. Using EZ Gig IV to do the cloning because it says the cloning process can be completed in only three steps. Have not much experience on computer and do not want to reinstall everything I have now.

However, the cloning process proceeds very slowly after I click the Start Clone button. Changed boot order already and followed this EZ Gig IV manual. When it finished, I cannot boot from the cloned SSD. Why and what should I do next?"

It is a post on EZ Gig IV clone not booting issue when he tried to clone old hard drive to new SSD. It would be frustrating when upgrading disk been paused due to cloning failure. Now, the most important thing is to figure out why would that happen and what should you do to deal with it. 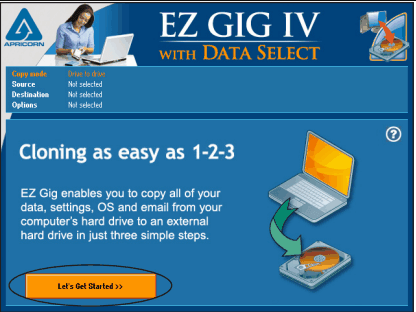 There are many possible reasons that could lead to cloning failure with EZ Gig. In general, the following reasons are common factors. Both causes and fixes will be introduced.

Other elements like using EZ Gig IV software crack and EZ Gig IV cannot find drive is likely to get into that trouble. Some sorts of trouble could be solved with those fixes, yet some could not.

What’s worse, the EZ Gig IV cloning Software with Data Select for Windows can support deselecting files from the given four folders only. That makes deselecting other programs or partitions impossible. Write errors and cloning in a very slow speed issues are also complained by users. As a result, turning to EZ Gig IV alternative is a wise option.

If problems cannot be fixed by all mentioned means, it is time to choose a different cloning tool. AOMEI Backupper Professional is reliable cloning software that ensures a secure boot. As an all-around cloning tool, it provides different features for different purposes.

And either way, this software uses the Intelligent Clone feature, which clones only used sectors whether it's a system partition, data partition or disk. This makes it easier to clone large drive to smaller SSD with secure boot. Also, you can use the Sector by Sector Clone option, which, as its name implies, will clone every sector from the source to the destination.

In addition, the software has lucid and user-friendly interface, and supports Windows 10, 8/8.1, 7, XP and Vista. Why don’t you have a try?

Note: selected SSD will be overwritten, so please back up important files beforehand, if any.

1. Connect the SSD to your computer and make sure it can be detected by Windows. Install, launch and register AOMEI Backupper Professional.

2. In the main console, click Clone and then System Clone.

3. The system drive and boot related partitions are selected by default. Now, select SSD or partition on it as the destination.

4. Check the option SSD Alignment to improve the reading and writing speed and prolong its lifespan. By default, the Make full use of disk space will be checked if the SSD is larger. Then, click Start Clone to execute the task. 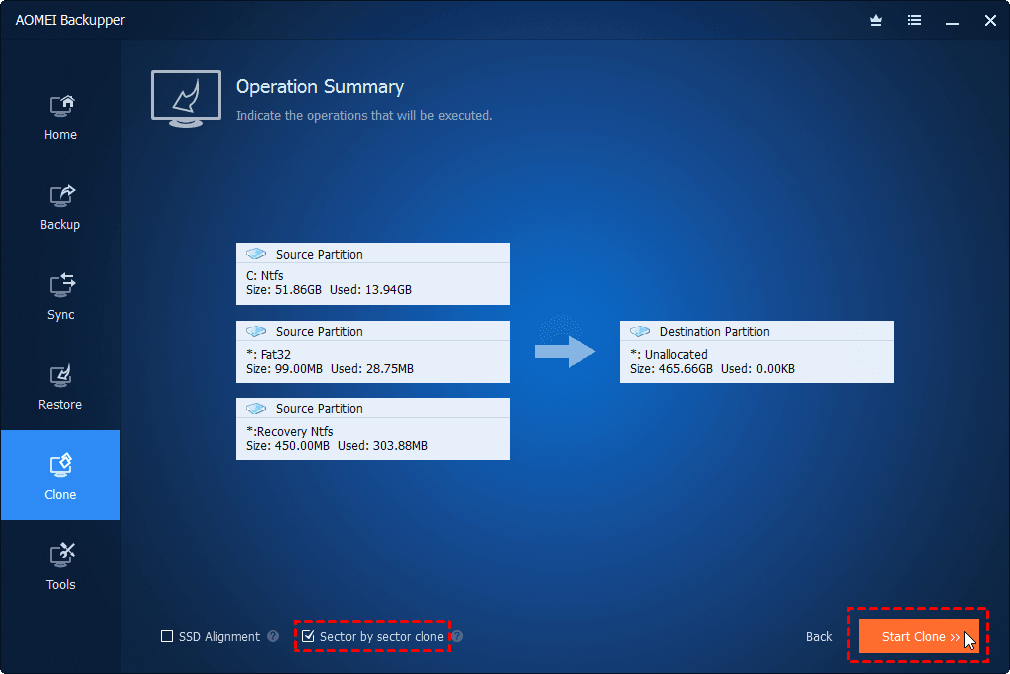 After that, grab a cup of coffee and wait for it to complete. The time takes any point from minutes to several hours, depending on how large your drive is.

It is suggested to remove the old hard drive, install SSD and then boot from the cloned SSD for the first time. You can also change boot order in BIOS, but the first method is recommended.

Several solutions for EZ Gig clone failed issue are discussed above. Choose the one that accords with your situation to fix. If the problems cannot be solved, then it is a good idea to use a different cloning utility. AOMEI Backupper Professional earns a good reputation among its users, so give it a shot at least.

Other than cloning features, the software is also a complete backup solution for all Windows computers. For example, you could perform system backup to external storage on a regular basis to protect your Windows continuously. More advanced, its technician or techplus edition allows you to deploy system image to multiple computers simultaneously. Just download it to have a try!

You May Also Like
2 Ways: Clone Old Computer to New PC (Bootable)
The Best HDD Cloning software for Windows 10
How to Clone Hard Drive to SSD in Windows 10/8/7? (Video Tutorial)