“I have a 250GB Samsung IDE HDD and want to ‘clone’ it to a SATA II HDD. I want to remove the IDE HDD and use the SATA HDD as my main drive. Is this possible? If so, what software do I need to do this?”

IDE and SATA are different types of interfaces to connect storage devices to a computer’s system bus. You may clone IDE to SATA for following reasons:

What’s more, cloning IDE hard drive to SATA helps you upgrade hard drive without reinstalling Windows. All data on the source IDE disk including the operating system, applications, and user files will be transferred to the destination SATA disk. Compared to doing a fresh install, performing disk clone saves you much time and efforts.

Before you start cloning IDE hard drive to SATA, you should do following preparations:

1. Check whether your computer board supports SATA. If it does, you just need a SATA cable and power cable to connect the SATA disk to your computer; if not, then you should buy an IDE-to-SATA adapter to connect your SATA drive. 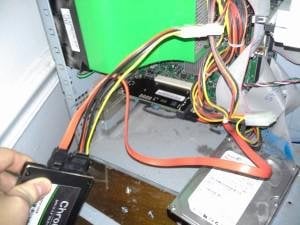 2. Get a SATA HDD/SSD. If you want to enjoy even faster speed, a SATA SSD is recommended.

How to copy IDE hard drive to SATA SSD simply?

Bear in mind that the target SATA SSD will be overwritten during the cloning process. So if there’s important data on it, be sure to backup files beforehand. Learn how to clone IDE hard drive to SATA via AOMEI Backupper as follows:

Step 1. Connect the target SATA SSD to your computer and make sure it is detected. Then, download and install AOMEI Backupper.

Step 3. Select the original IDE hard drive as the source disk and click Next.

Step 4. Select the SATA SSD that you previously connected to your computer as the destination disk and click Next.

Step 6. Wait until the cloning process is finished. Change boot order in BIOS to boot from the cloned SATA SSD. You can also remove the original IDE hard drive and have only the SATA SSD connected to your computer after cloning.

✎ Notes:
▪ If you tick Sector by sector clone in Step 5, AOMEI Backupper will clone every sector on the source IDE disk no matter if it contains any data or not. It requires the destination disk to be equal to or larger than the source disk.
▪ If you want to only migrate OS from IDE hard drive to the SATA drive, you will need to upgrade to AOMEI Backupper Professional and use the System Clone feature. You can also clone system disks between different partition styles (MBR to GPT or GPT to MBR) with the Pro edition.