In this article, you will learn the best way to clone mSATA SSD to mSATA SSD, and some useful tips to ensure successful cloning.

Get the best mSATA cloning kit and clone mSATA SSD step by step:

Case: How to Clone mSATA SSD to mSATA SSD?

my laptop presently has a 120GB mSATA SSD and 1TB HDD installed, with the OS installed in the mSATA. I wish to replace the 120GB mSATA with a 240GB mSATA, retaining the 1TB HDD. Could someone advise me on the best way to go about this please?

First of all, let's get to know some basic information about mSATA hard drive.

What is mSATA Hard Drive?

The mSATA (Mini-SATA) drive is a solid-state drive that has a very small form factor which is similar to mini-PCI Express cards. It’s the ideal hard drive for notebooks and ultrabooks due to its tiny size. The mSATA SSD capacity ranges from 30GB, 40GB, 80GB, 120GB, 250GB, 500GB, 1TB, 2TB, etc. In general, it could be used as an internal hard drive in thin devices or as a secondary drive in desktop. 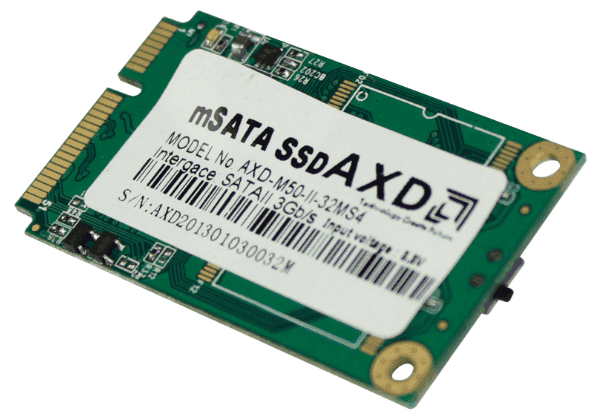 Although there are another kind of SSD, M.2 SSD is much better than mSATA SSD, but you can’t plug the mSATA into M.2, because they are different: The M.2 drive can support both SATA and PCl-E interface options whereas mSATA can only support SATA. Sometimes, you may want to clone M.2 SSD to M.2 SSD easily and quickly.

Actually, it’s easy to clone mSATA to mSATA with the best mSATA SSD cloning toolkit - AOMEI Backupper Professional, which is easy to use and much faster to transfer data. It’s designed for Windows popular operating systems like Windows XP, Vista, 7, 8, 8.1, 10, 11.

And you could clone mSATA SSD to mSATA SSD with a larger one or a smaller one (as long as the used space on source disk smaller than destination disk). After cloning, it will move everything from mSATA SSD to another mSATA SSD, including Windows operating system, installed programs, settings, registry, personal files, etc.

Besides, you still can enjoy the following two small-shining cloning features:

SSD Alignment: It is to boost the performance of SSD disk and accelerate its reading & writting speed as well as prolong disk lifetime.

Note that the professional version supports both data disk and system disk from MBR disk to MBR, MBR to GPT, GPT to GPT, or GPT to MBR. If it is a data disk, the best choice is using FREE disk cloning software - AOMEI Backupper Standard.

Then, continue to see below and learn how to clone mSATA SSD to larger mSATA SSD without reinstalling Windows and applications in Windows 11/10/8/7:

Note: The Clone feature can only be demonstarted in the trial version, if you want to clone HDD to Samsung SSD and directly boot from it, please upgrade Pro trial to the full version of AOMEI Backupper Professional.

2. Choose the smaller mSATA SSD to clone, and click Next>>.

3. Select the larger mSATA SSD drive as the destination, and then click Next>>.

✍Tip: you will be prompted that the data on the destination mSATA SSD will be deleted or overwritten. Press OK if you have backup files already.

4. Tick SSD Alignment option to optimize the reading and writing speed for the larger mSATA SSD. And click Start Clone >> button to easily clone mSATA SSD to mSATA SSD with a larger one.

✍Tip:
✿ Sector By Sector Clone: This option will clone all the sectors on the source SSD whether it is in used or not. If you clone larger SSD to smaller SSD, please DO NOT select the option.
✿ Edit Partitions: This option allows you to resize partition size of the destination disk so so to avoid unallocated space after cloning. And it will gone if you check Sector by sector clone.

Wait for 20 minutes or more, depending on the data size on the source disk, the process of cloning mSATA to mSATA will be finished. If your computer is running Windows Server 2003/2008/2012/2016/2019 (including R2), you could use AOMEI Backupper Server as instead.

After the mSATA clone finished, you can start to boot computer from it.

1. Shut down the computer.

4. Go to the Boot option and set the cloned mSATA as the first boot option.

5. Press a specific key to save changes and boot from the larger mSATA SSD.

It’s peace of cake to clone mSATA SSD to mSATA SSD with the help of AOMEI Backupper Standard. It allows you to clone all kinds of SSDs, such as, SATA SSD, PCIE SSD, NVMe SSD, etc.

Also, you can choose to only migrate Windows 10 to SSD with its System Clone feature. It only includes the operating system and other items on the system drive.

In adition, it is still a professional backup and restore software, which can help you protect your data continuously by its useful features, such as, System Backup, Disk Backup, File Backup, Schedule Backup, etc.