4 solutions offered in this post to show you how to backup hard drive from command prompt in Windows 10, 8, 7.

How to backup hard drive from command prompt?

“My hard drive showing the low disk space error in my Windows 10 computer, I want to backup the entire hard drive to external one to spare more free space on the hard disk, How do I backup my hard drive from command prompt? Or other backup tools should I know? Please help, thanks in advance.”

Some users ask if there a way to backup hard drive with diskcopy cmd. However, diskcopy only copy the contents between floppy disks, and it’s not available in Windows 10. If you use diskcopy with a hard disk, you will get invalid drive specification error. Unfortunately, Microsoft Windows does not support the diskpart clone disk as you wish as well.

In Windows 10/8/7, there are some backup tools you may interested in:

According to Microsoft website, the syntax of Xcopy is::

To copy all files and directories(including hidden or system files) from drive D to drive E, input the command: 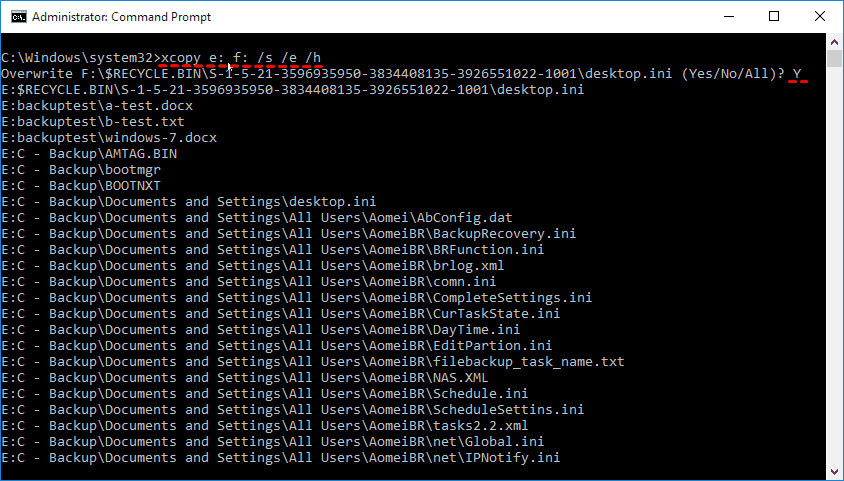 Besides, you could use the parameter:

If the source and destination disk own the different format, use Xcopy command line instead of diskcopy (only support the same format disks).

It’s easy for you to create a full backup that includes all the drives connected to your PC via Wbadmin command. Follow the steps below to backup hard drive from Wbadmin command prompt:

1. Open an elevated command prompt: You can type CMD in the search box, and in the listed results, right-click Command Prompt and choose Run as administrator.

2. Then run the following command: (backup disk to an image file)

This command will create a backup including your C, D, and E drive to F drive. When you write command to backup your hard drive, you need to change the drive letters based on your situation.

As you can see from the screen, WBadmin also allows you to backup to a network shared folder. If the shared folder is encrypted, you will need to use switch -user:username and -password:userPassword to input your user name and password. If you need to let WBadmin restore backup from command line, run wbadmin start recovery command prompt.

You could use the third-party disk backup software - AOMEI Backupper Professional, which provides you the command prompt named AMbackup.exe to create hard drive backup easily with a simpler command. It provides specified command to backup hard drive, partition, and system. It provides multiple editions for both Windows PC and Server.

To backup hard drive from command prompt to an image file using AMbackup.exe, please download AOMEI Backupper 30 day free trial first and have it a go:

2. Open an elevated command prompt and type the path of the installation directory of AOMEI Backupper and press Enter.

Tip: After installing, right-click the AOMEI Backupper icon on the desktop, select Open file location to get the installation directory.

3. Write a command referring to the following to backup an entire hard disk:

For example, the disk backup command prompt line is:

This command will create a new backup task named “Disk Backup” include the whole disk 0 to E:\disk backup folder.

Once you run the backup task, and AOMEI Scheduler will open immediately at the lower right corner of the desktop, and the disk backup task will run backgrounds. See more details, please open AOMEI Backupper GUI to check. 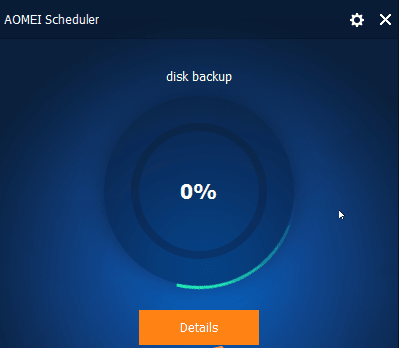 Besides, you could use clone hard drive command prompt to clone the entire disk easily, just input the command: (copy all data, no compression)
AMBackup /c /t Disk /s 0 /d 1 /a

This command will clone disk 0 to disk 1 and using partition alignment to optimize for SSD. 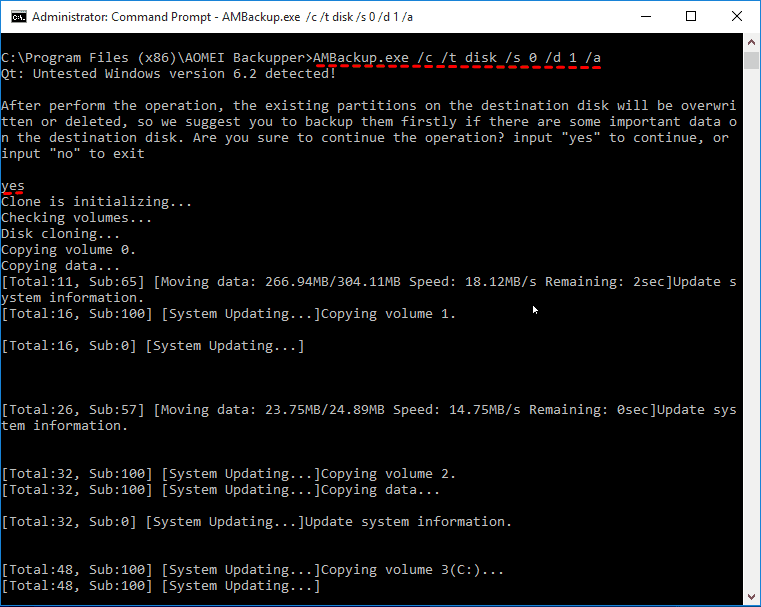 Input yes after executing the cloning to delete all data on the destination disk, or input no to backup critical data first, then run the above command line prompt.

If the command line prompt still complex for you, you could run the AMBackup.exe GUI - AOMEI Backupper, which offers you a user-friendly interface and easy to operate features, like a disk, system, or partition backup, clone, restore, and sync functions.

2. Choose the hard drive you would like to backup as source disk, hit Next.

3. Tap another hard drive as a destination path to save data from source disk, hit Next.

Sometimes, you may meet the unbootable issues when Windows computer fails to boot, and intend to backup hard drive without Windows, fix it easily.

Besides, AOMEI Backupper has the ability to create bootable media to boot up your computer when Windows 10/8/7 failed to boot, then backup data; allow you to restore to dissimilar hardware computer if needed; create incremental or differential backup, schedule backup, real-time file sync, etc.