Use Windows 7 Backup Command Line to Securely Back Up

Prefer to Windows 7 backup command line to back up system state and crucial data? This page shows how to perform Windows 7 command line backup and restore with wbadmin and powerful tools.

When talking about backup command in Windows 7, we usually refer to using wbadmin command line. You may want to have a brief understanding about the tool before learning how to use it.

Things you need to know about wbadmin in Windows 7

Wbadmin, inbuilt backup tool available in Windows Server 2008 (R2)/2012 (R2)/2016 (R2) and all Windows PC operating systems, allows you to back up files, folders, volumes, partitions, system state, etc. to target location. Two kinds of wbadmin restore operations are supported. One is bare mental restore, the other is individual file and folder, and system state restore.

Compared with backup command line in other operating systems, the wbadmin command in Windows 7 has fewer functions available. In general, five commands which can be listed with “wbadmin /?” command are supported by wbadmin in Windows 7. 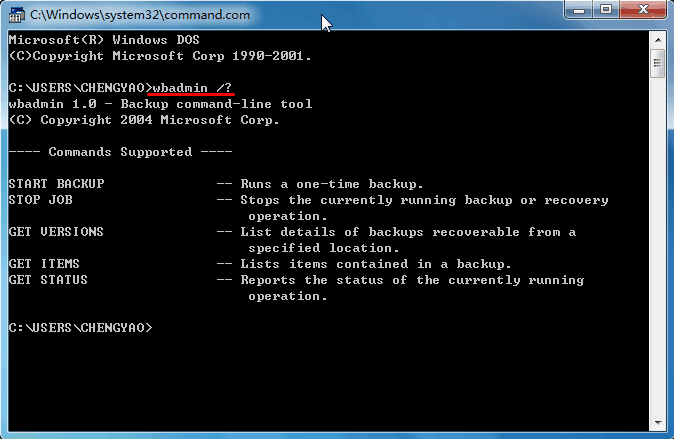 Then, let’s get to know how to backup system state in Windows 7 with wbadmin.

This part will take backing C drive to E drive including system state with no prompts to the user for example. It can create a bare metal backup used to restore the Windows operating system to similar or dissimilar hardware. Connect the target disk to your Windows 7 if necessary.

1. Click Start and type command prompt in the search box. Right click Command Prompt from the list and select Run as administrator to open an elevated command prompt.

2. Type this command at the prompt and press Enter. Change to the correct drive letter in your case. 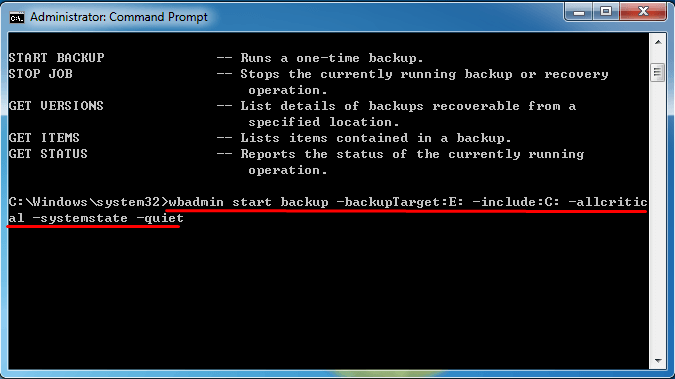 3. Wait for the process completes, and type exit.

Descriptions✍:
❈ -backupTarget: specifies the storage location for this backup.
❈ -include: specifies the items to include in the backup.
❈ -allcritical: specifies that all critical volumes (volumes that contain operating system's state) be included in the backups.
❈ -systemstate: creates a backup that includes the system state in addition to any other items that you specified with the -include parameter.
❈ -quiet: runs the subcommand with no prompts to the user.

To backup Windows 7 files from command prompt when Windows fails to start, notepad is helpful as well. Firstly, type notepad at the prompt and press Enter. Secondly, click File and then Open. Then, you’ll access to the Libraries interface. Next, you can find the files you need to back up.

Windows 7 command line backup and restore with an easier way

It is convenient to backup Windows 7 with wbadmin. Nevertheless, you may encounter wbadmin cannot start, wbadmin cannot find backup when restoring, or wbadmin system state backup fails, etc. If you unlucky to facing one of those troubles, it is wise to turn to another powerful Windows 7 command line backup tool.

AOMEI Backupper Professional, an all-around command line backup tool, brings you AMBackup.exe utility to backup Windows 7 with command prompt. It is easier to use and allows you do incremental backup with command line. Differential backup and full backup are available as well. You have choices to create system backup, partition volume backup, disk backup, files/folders backup to external storage, network path, etc. Backup image compression, splitting and encryption as well as sector by sector back up are supported.

Command line restore is also quite easy to operate with the help of AOMEI Backupper. You can create bootable media and perform system restore to a machine with similar or dissimilar hardware. Let’s take a closer look.

1. Install AOMEI Backupper on your computer. Keep a note of the installation path because you’ll need it later. Connect the target storage to your Windows 7 if necessary. 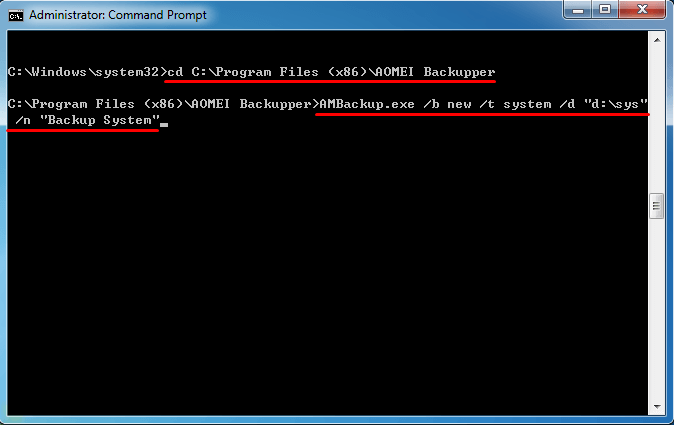 4. Wait for the process completes and type exit.

In case you’ll need to restore system image one day, it is suggested to create a bootable device as covered. Make sure you can access the backup image or you know the exact location of the backup image. 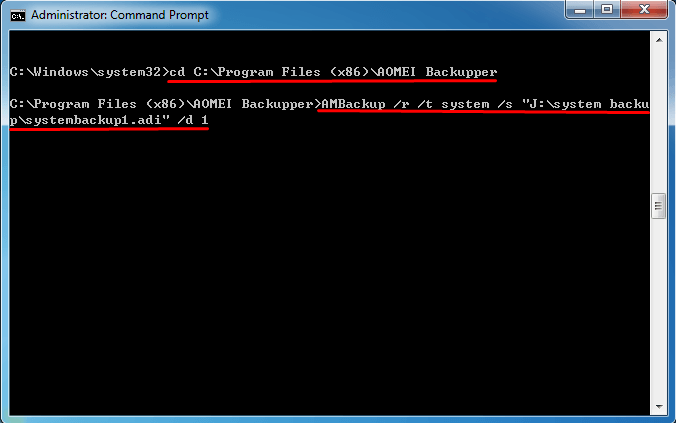 4. Wait for the process completes.

The software also provides graphical user interface with all features included for all level users. It has the same function in backing up Windows 7. You may want to give AOMEI Backupper Professional 30-day free trial a shot. The graphical user interface is easier to use. It only takes a few clicks to use it to back up your system, and it will automatically help you select all system and boot partitions.

Two ways of Windows 7 backup command line are introduced. The final goal is to protect your Windows 7 in an easy way. Choose the one that suits you most. As a matter of fact, AOMEI Backupper Professional supports clone hard drive with command prompt as well.

After comparison, AOMEI Backupper Professional can provide you with more backup and restore commands than wbadmin tool. Its graphical interface is also very friendly and all operations are easy to complete. You can also use it to backup only changed files on Windows 7. Try this powerful backup and restore software now!