How to create backup with Windows 7 WBAdmin command? This article will show you the detailed syntax and find its GUI version to backup data with simple clicks.

To view what functions Windows 7 WBAdmin support? You could click Start -> type cmd and hit enter -> input the wbadmin /? command into Command Prompt. Then you will see the window like below. By the way, WBAdmin commands vary in different Windows and it has less available features in Windows 7. 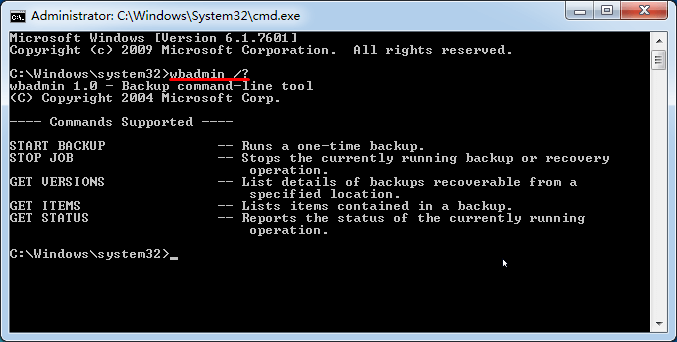 In Windows 7, Wbadmin only supports 5 commands:

How to Use WBAdmin Start Backup in Windows 7?

In Windows 7 and Windows Server 2008 R2, you could create backups with WBAdmin start backup command, here is the syntax:

Backup all critical volumes (contains the operating system and components) to E: drive, input the command: 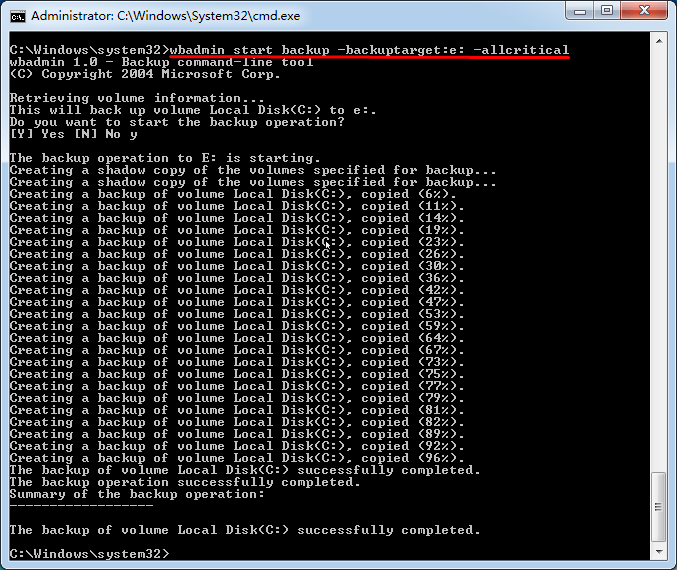 Then you will get the backup file, a virtual hard disk (.VHD) file. And the backup file is located in the WindowsImageBackup folder in destination location.

Use shadow copy to create full backup of C drive to E drive, here is the command: 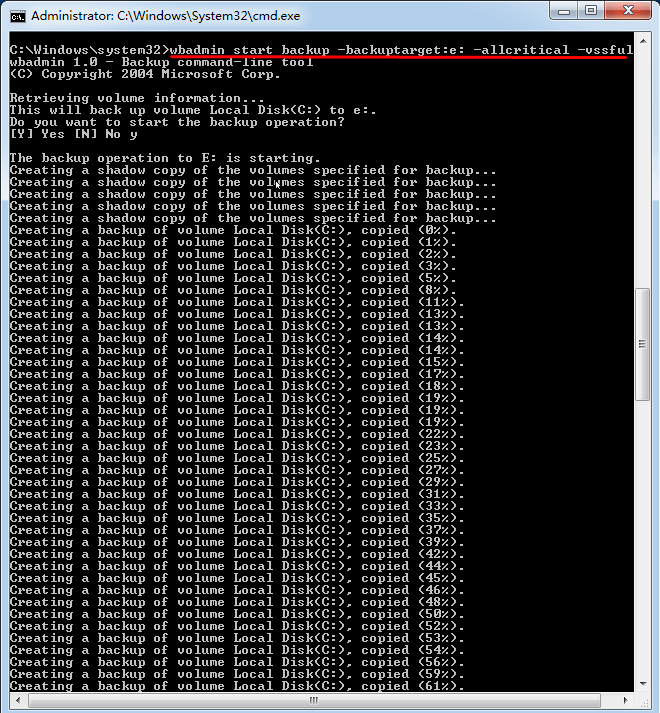 Besides, you could backup the data to remote shared location. However, you could neither create WBAdmin system state or bare metal backup in Windows 7, nor restore the backups. 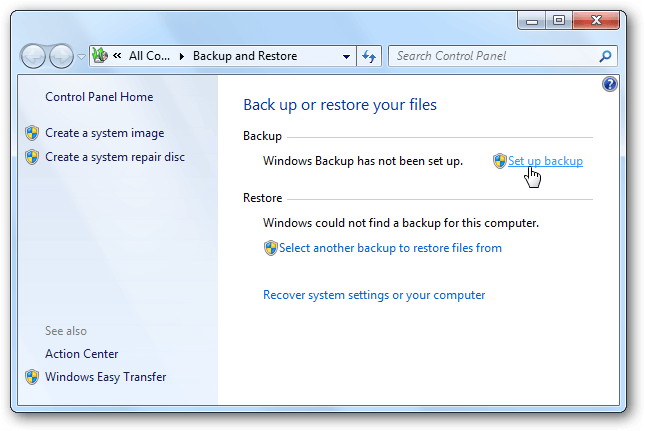 If you have never created one, tap Set up backup.

The Windows Backup and Restore will backup your files in Library, Desktop and the Windows folder, including Windows 7 system image, or choose what data to backup. Besides, it allows you to create a schedule backup as you want. 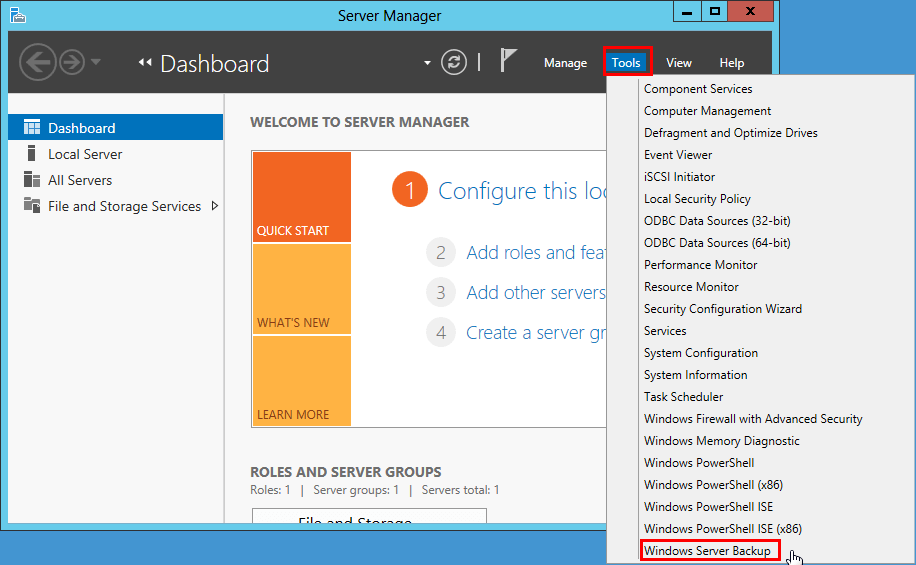 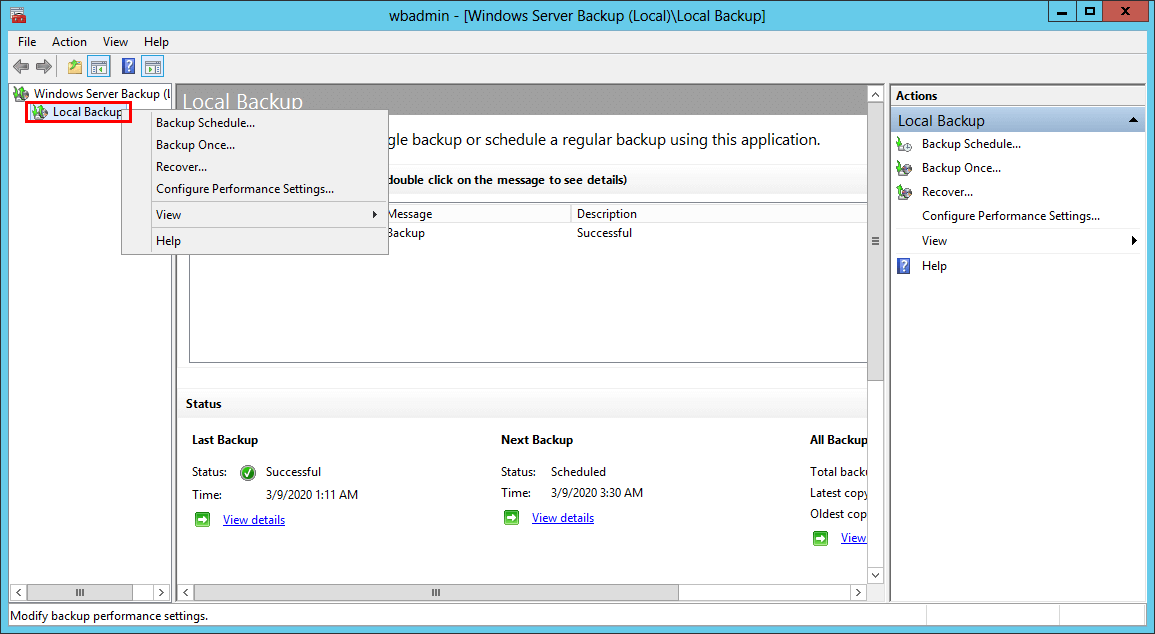 To backup entire Windows 7 computer, the best free Windows backup software – AOMEI Backupper Standard will help you out. It’s for Windows XP, Vista, 7, 8, 8.1, 10 to backup your entire hard drive, operating system, partitions and other personal data. Here we will show you how to backup operating system to external hard drive in Windows 7.

First of all, please download AOMEI Backupper Standard first, the Windows 7 backup steps are listed below.

2. Select the external hard drive as the destination path to save the Windows 7 system image. the system partitions associated with system files will automatically selected.

After a while, you will find the backup image file (suffix with .adi) in your external hard drive. It allows you to restore the system image if required someday. Besides, you could restore backup to dissimilar hardware computer, clone Windows 7 entire hard drive to larger HDD/SSD, real-time sync, etc. For server users, just try AOMEI Backupper Server.

You May Also Like
Use Windows 7 Backup Command Line to Securely Back Up
How to Run System Restore from Command Prompt Windows 7?
Step-by-step to Create Incremental Backup with WBADMIN Tool
WBAdmin Start Systemstatebackup Command for Windows PCs