What is NTBackup in Windows Server 2003? Read this article patiently to learn more and the top 5 practices for it. And you can also do these backup and restore tasks easily with another software.

NTBackup (included in Windows XP) is the snap-in free backup software for Windows Server 2003 (R2), and it helps you to backup system state, files and folders to tape, ZIP drives, floppy disks, and hard drives. In Windows Vista and later operating systems, it has been replaced by Windows Backup and Restore, which uses the Virtual Hard Disk (VHD) file format to backup. For Windows Server 2008 and later OS, you could find wbadmin backup command or GUI-version Windows Server Backup instead of NTBackup.

How to use NTBackup in Windows Server 2003? Please go to Start -> All Programs -> Accessories -> Command Prompt to use NTBackup command tool. And then to view how to use this tool, input ntbackup /? to see the syntax. 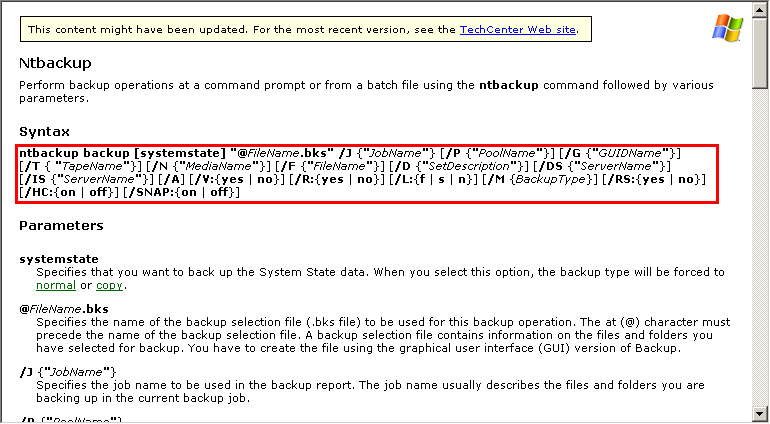 ▆ To create a system state backup for Windows Server 2003, you could use the command: 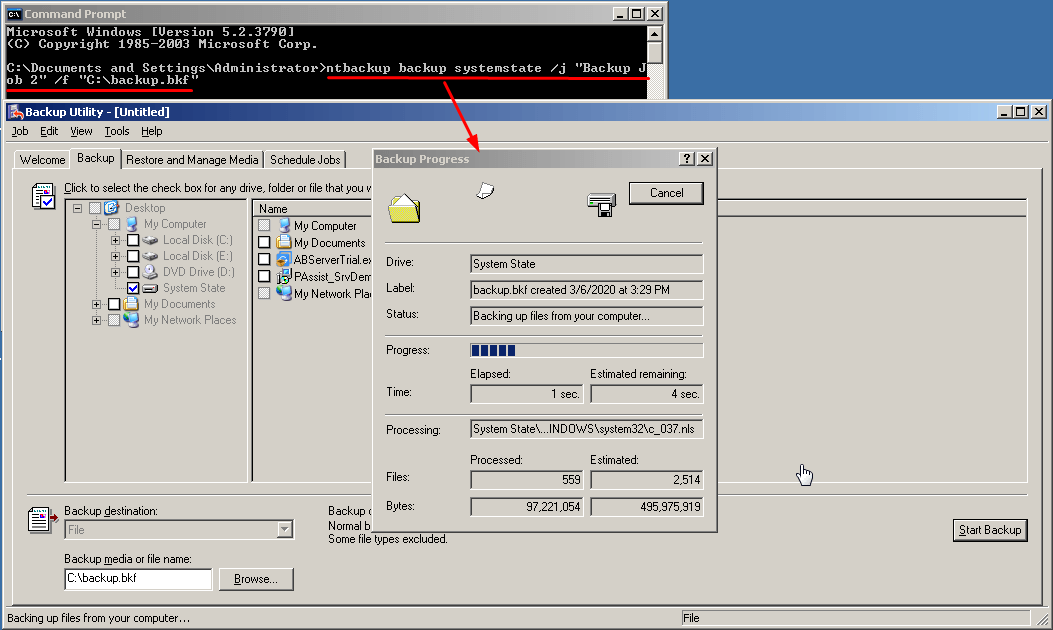 ▆ To create a backup of your E drive named Backup Job 1 to the D:\backup.bkf file, you could run the following command: 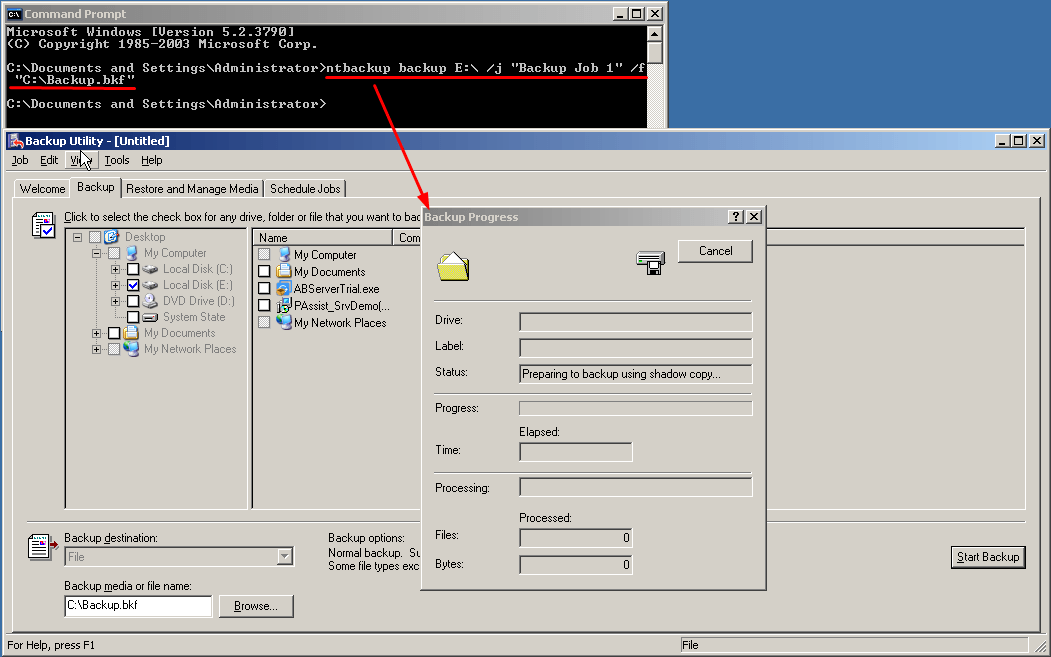 ▆ To set advanced options for your backup, try the following syntax:

▆  For example, to create a backup job named "Backup Job 1" that backs up data on drive E:\ to the file C:\backup.bkf and disable the volume shadow copy, input:

▆ To set the backup type for your backup, use the syntax:

You cannot restore files from the command line using the NTBackup command. You could find the .bkf file in File Explorer to restore or open Backup Utility directly to restore:

1. Double-click the .bkf file to open Backup or Restore Wizard. 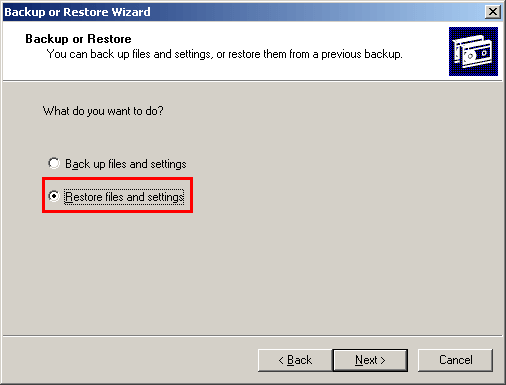 3. Click + icon to expand the .bkf files created before, choose a .bkf file, expand its data -> tick the files, folders or drive you want to restore, click Next. 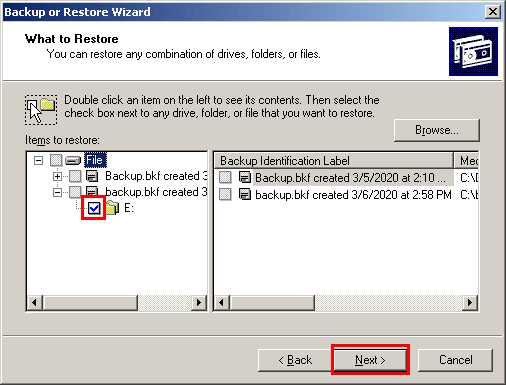 4. Select Finish to start to restore data to the original location. To restore to other locations, click Advanced to specify the destination. 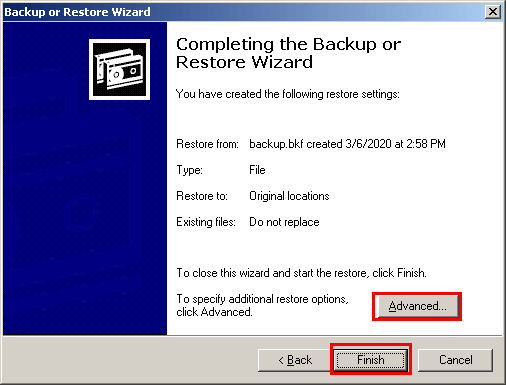 NTBackup is quite complex for ordinary people, it’s not easy to operate. Is there any easy way to backup and restore your data on the computer, like OS, system files, partitions, program settings, and personal files? The best Windows Server backup software – AOMEI Backupper Server could help you backup them in simple steps and run backup tasks automatically. It is available for Windows XP/Vista/7/8/8.1/10/11 and Windows Server 2003, 2008, 2012, 2016, 2019, 2022, including the R2 version.

AOMEI Backupper Server owns all functions of NTBackup and provides more:
☃ More storage devices are supported to save the backup file, like USB flash drive, external hard drive, NAS, network share, and even the cloud.
☃ Flexible way to modify backup images. AOMEI Backupper allows you check, split, compress, encrypt, comment on backup image, merge backup images, etc.
☃ Keep multiple backup versions regardless of storage device. You can set schedule backup and incremental or differential backup to run backup automatically, and in time you will be able to get multiple backups.
☃ Customize the backups you want to retain, even hierarchical, with the by daily/weekly/monthly option, and manage disk space more flexibly.
☃ Restore backup image as you want as long as the backup is created by AOMEI Backupper. NTBackup is not allowed to restore backup files except for the Backup Utility.

2. Select a destination to back up Windows Server 2003 (R2) OS, system files, boot files, etc, which is selected by default.

Go to the Backup and select File Backup. Then, select files and folders you want to backup, as well as a backup drive to store your data, click Start Backup.

Click Options at the final window, then you will see 4 tabs as follows.

Cllick Schedule Backup at the final window, and enable it, you will see 5 options in the following: 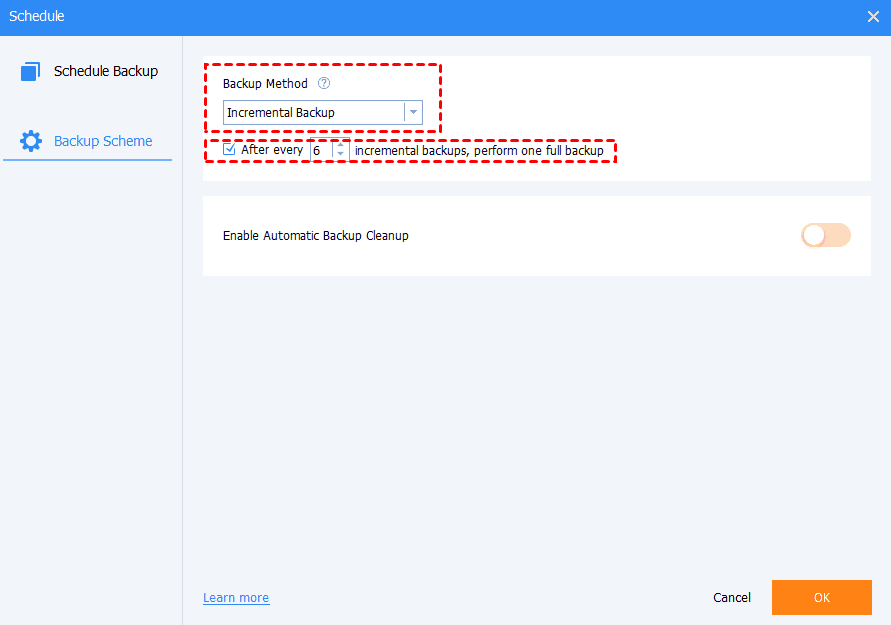 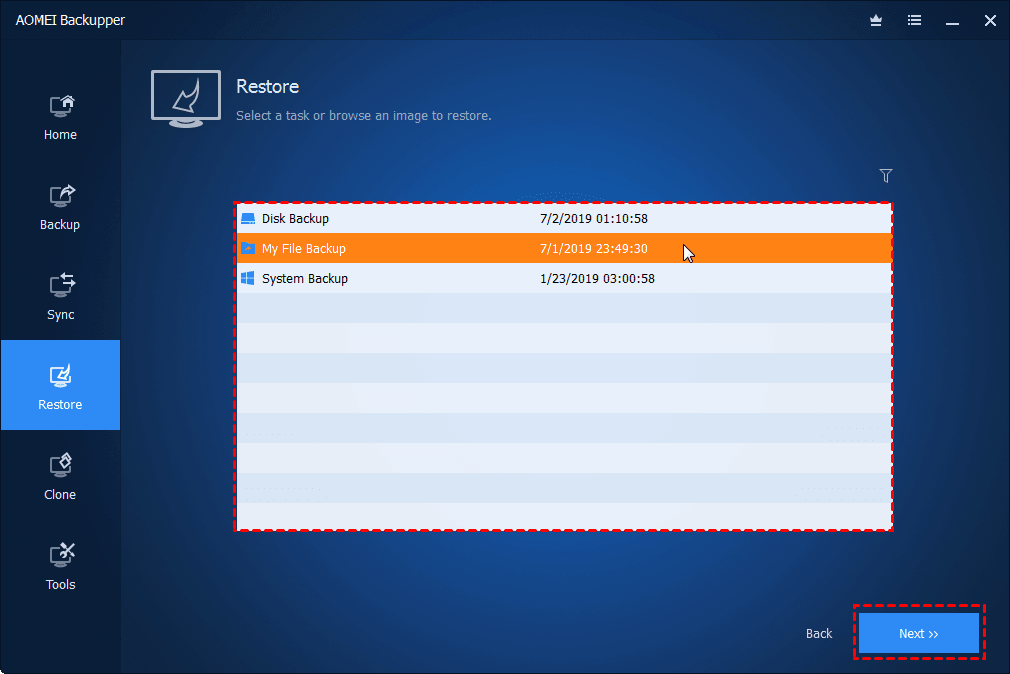 Besides, you could create bootable media to boot your computer if you need to restore system someday when the system failed. If you don't have any device to store boot files, try the recovery environment feature or PXE boot tool, depending on the number of computers you want to restore.

For professionals, NTBackup is a great backup tool to backup Windows Server 2003, or Windows XP. If you’re not an expert for computers, you could try the friendly user interface Windows Server backup software – AOMEI Backupper. It not only helps you backup system, disk, partition or files you like, but also makes this task to run automatically.

More importantly, it is a good helper to manage disk space with its rich backup features, such as compression, schedule backup, incremental or differential backup, automatic backup cleanup, etc. For IT technicians, try AOMEI Backupper Technician or TechPlus edition.