How to Clone SSD in Windows 7 Easily Without Losing Data

Do you want to clone SSD in Windows 7 to a larger SSD? This goal can be achieved through very simple operations. All you need is an efficient cloning software.

Why do you clone SSD in Windows 7?

What’s your reason for choosing SSD (Solid State Drive) rather than HDD (Hard Disk Drive)? Is it the high speed of computer booting and data accessing, the low power consumption or the strong durability? Anyway, you should probably know that these advantages are not gratuitous - SSDs are generally more expensive than HDDs for the same capacity. In other words, you usually only get an SSD with less capacity than HDD under the same budget.

When you actually encounter an SSD capacity shortfall in Windows 7/8/10, you can replace the SSD with a larger one, just as replacing HDD with SSD for better performance. But if you don't want to lose the data that you've accumulated for so long, an effective SSD cloning solution is necessary.

Here in this post, we'll talk about related issues such as: 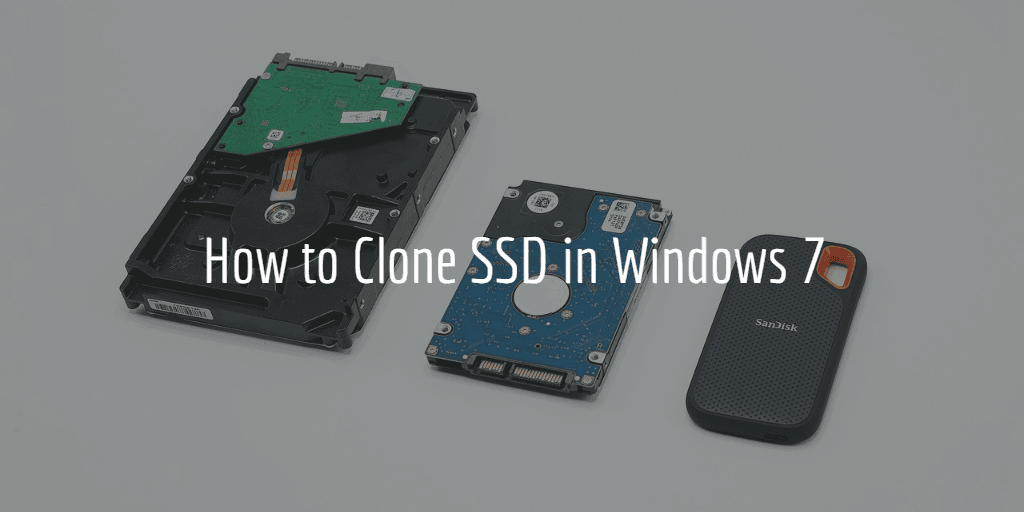 Can you clone SSD to another hard drive directly?

You’ve probably thought about migrating SSD to a larger one without transit device like USB or external hard drive . But manual copy & paste is obviously not a safe and quick way - it doesn't applied to hidden files and system files, let along the transmission speed that is relatively low.

In this case, the importance of a quick and reliable cloning tool comes to the fore. It shall be able to clone SSD in Window 7, 8, 10. The operation should be simple enough for an amateur user to master, and there should be rich options to customize the migration until it’s to your satisfactory.

Based on these considerations, I recommend AOMEI Backupper Professional. It supports all Windows OS, and has powerful backup and cloning ability.

Preparations before cloning SSD to another SSD

Before performing SSD cloning in Windows 7, there are some things to be done first. Take cloning SSD to larger SSD as an example, you need to prepare:

How to clone SSD in Windows 7 without data loss

If you’ve decided to have a try on the tool AOMEI Backupper Professional, you can quickly clone SSD in Windows 7, Windows 8, Windows 10, etc. with Disk Clone feature.

★ With the default intelligent mode, you are even allowed to clone larger drive to smaller drive (such as clone larger HDD to smaller SSD), because it only copies used sectors to the target disk.

★ If you only want to clone Windows 7 to SSD without changing other partitions on the old HDD or SSD, then you can use the System Clone feature. It allows you to migrate only OS to SSD directly, while other files unrelated to system remain unchanged.

Here's an example to clone SSD to larger SSD in Windows 7. In fact, this approach also applies to cloning HDD to SSD or SSD to HDD - you just need to specify the source disk and target disk accordingly.

How to clone SSD to another SSD in Windows 7:

2. Select your current SSD (the disk you wish to clone) as the source, click Next.

3. Specify the destination SSD to clone the source disk to, click Next to continue.

4. Optimize the cloning by Edit Partition, SSD Alignment (recommended) or Sector by Sector Clone according to your needs, then confirm all your operations and click Start Clone if nothing is wrong.

◆ SSD Alignment: it’s highly recommended to tick this option if your destination disk is a SSD, since it will accelerate the reading and writing speed for solid state drive.
◆ Sector by Sector Clone: ticking this will clone all the sectors no matter it’s used or not. Otherwise it will only copy used sectors intelligently.
◆ Edit Partition: adjust the partition size and drive letter. It's especially helpful when you want to clone smaller SSD to larger SSD.

5. Wait for the cloning to end, click Finish to exit.

Then you can restart your PC and launch Windows 7 with the larger SSD. The approach was like: restart > get into BIOS with specific key > set cloned drive as the first boot option > save the settings and exit.

AOMEI Backupper enables you to clone SSD to a larger SSD in Windows 7 as well as other Windows OS without losing data, and with the intelligent cloning mode, you are also allowed to clone larger drive to a smaller SSD.

Furthermore, AOMEI Backupper is an excellent backup and restore software. Even after the disk migration has been done, you can use it to back up files and folders, partitions, disks and the system in case of any unwanted data loss and system failures. You can even perform a scheduled automatic backup to protect important data regularly.