The best way to clone SSD to new SSD with larger capacity is using free cloning software which helps you clone the entire SSD (Solid State Drive) to your new SSD with the intact stuff.

How Do I Transfer Old SSD to New SSD?

My OS is only 2-month old and it's set up with all of my stuff (there are a lot of apps and configurations setup). What's the best way to migrate everything from my old OCZ 240GB SSD to my new Samsung 1TB SSD? Thanks!

Why clone SSD to another SSD?

Replacing HDD (Hard Disk Drive) with SSD (Solid State Drive) to get better performance of operating system is very popular among Windows users. Yet SSD isn’t famous for large capability as HDD is, so it is easier to get low disk space warning after a couple of months or seasons’ usage.

Therefore, it is not rare for Windows users to purchase new SSD, and copy contents of old SSD to the new one. To do this, you might first think of backing up SSD and restoring the image file to the new SSD, which is indeed a viable method. But disk cloning is definitely a more straightforward way, because it can eliminate the recovery process.

How to clone SSD to new SSD with secure boot

Cloning is not the same as copying and pasting. To migrate everything from the old SSD to a new SSD and make it bootable, you need to use effective disk cloning software, because Windows itself lacks this feature. Here I recommend AOMEI Backupper Standard for its simplicity and efficiency:

✧ It can clone larger drive to smaller drive with intelligent clone, or make an exact copy of the source disk with sector-by-sector clone.
✧ It can fit all partitions on the new SSD with “SSD Alignment” to optimize SSD performance.
✧ It has a user-friendly interface, so don’t worry about the operations even if you are a novice.
✧ It supports nearly all common SSD brands and models. You can use it to clone Samsung/Crucial/WD SSD, SATA/M.2 NVMe SSD, etc.
✧ It supports Windows 11, Windows 10, Windows 8/8.1, Windows 7, Windows XP and Windows Vista.

Download this SSD cloning freeware - AOMEI Backupper Standard to have a try now.

Steps to clone SSD to another SSD with AOMEI Backupper

In the first place, connect the new SSD to your computer. The following guide will show you how to use AOMEI clone SSD to new SSD for free.

Before you start:
• Install the new SSD. If there's only one slot, try using an adapter or SSD enclosure to connect it.
• Initialize the new SSD. It is best to make the partition style (MBR/GPT) of the SSD matched to the source disk, so you don't need to change boot mode after cloning.
• If you've already stored some important files on the target SSD, please use AOMEI Backupper to make a backup first.

Note: The Standard edition supports cloning all data disks and MBR system disks. If you want to clone system disk from MBR to GPT, GPT to MBR, or GPT to GPT, please turn to AOMEI Backupper Professional and higher editions.

2. Select the old SSD as the source disk.

3. Select the new SSD as the destination path.

4. It is strongly recommended to check "SSD Alignment" box since the destination drive is an SSD. It will speed up the rate of reading and writing as well as prolong the service life of SSD. Then, click Start Clone to clone SSD to SSD.

5. To start your PC from the new SSD after cloning, be sure to change the boot sequence in BIOS, or replace old SSD with new SSD manually. 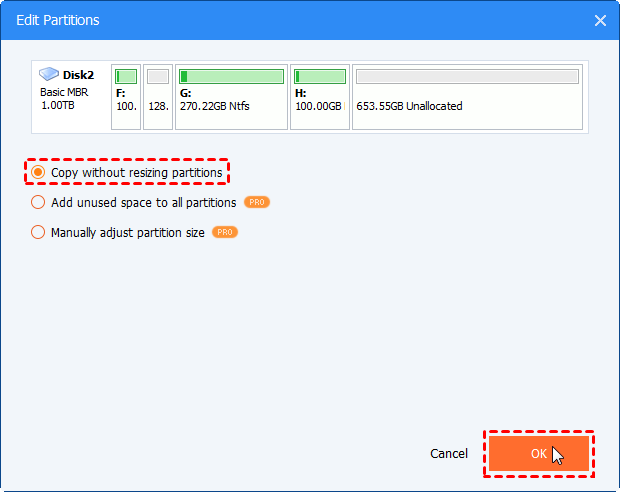 AOMEI Backupper helps you cloning SSD to new SSD easily. If your internal hard drive is an HDD instead of SSD, you can also use the software to clone boot drive to SSD. After cloning, just replace the hard drive (or change boot order) to boot your computer from the cloned SSD.

What's more, many helpful features like system backup, disk backup, file sync are built in this software. Feel free to have a try!