How to Sync Two Folders on Same Computer or Between Computers?

Why Sync Two Folders on the Same Computer?

Users may be troubled by this problem – how to sync two folders on same computer? With the increasing development of technology and science, computers play an irreplaceable role in our daily life. A large number of folders need to be stored in the computer. There are some important data in these folders such as your family photos, your favorite music, financial records, important documents and so on. It would be a huge loss if you lose these data.

How to sync two folders on the same computer easily and safely? AOMEI Backupper Standard, the professional folder sync software, can be the best solution. This useful freeware supports Windows 10, Windows 8.1/8, Windows 7, Windows Vista and XP, including all 32-bit and 64-bit versions.

With AOMEI Backupper, you could enjoy the benefit:

Besides, this folder sync software is easy to operate with an intuitive interface. You can sync two folders in Windows 7 or in Windows 10 easily under the guidance of the detailed steps below.

How to Sync Folders on the Same Computer Step by Step?

Before syncing two folders in Windows 10 computer, you must check the integrity of the folder. Compared to folders backup, folders sync would not create image file, which allows you view the contents anytime. Please download the free folder sync software now.

Step 2. You can modify the Task Name according to your needs. Click Add Folder to select the folder you want to sync.

★Notes:
✍Options allows you to comment on the folder sync task to distinguish it from others. You could also Enable email notification and then set up email configuration information to receive timely email or SMS notifications.
✍You can click Schedule to sync your folders automatically. There are five modes under General tab: Daily, Weekly, Monthly, Event triggers and USB plug in. The last two modes are supported by AOMEI Backupper Professional. Please upgrade to enjoy it. You could choose whether to Install service to run scheduled tasks or Run missed sync at the next system startup in Advanced tab.
✍Do not change the folder name of the source after syncing. Otherwise, this software cannot sync it anymore.

You can sync changed and added files from the source folder to the destination folder in real time using Real-Time Sync feature.

Another Way to Sync Two Folders on the Same Computer - SyncToy

SyncToy is a free file sync software provided by Microsoft, which is used to sync two folders in Windows XP, Vista, 7.

Step 1. Please download Microsoft SyncToy and install on your Windows 7 computer. Perform SyncToy, and click Create New Folder Pair button at the bottom of the window. 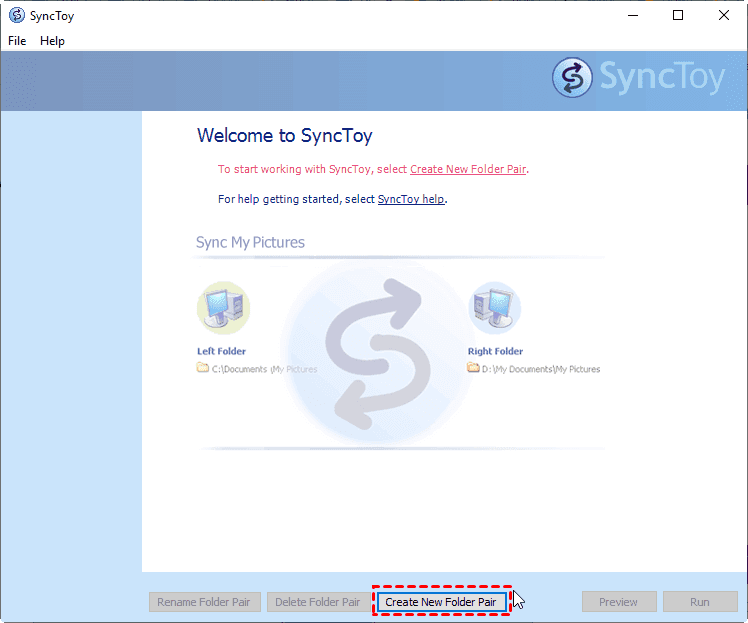 Step 3. Select target folder on the same computer at the Right Folder. And click Next >. 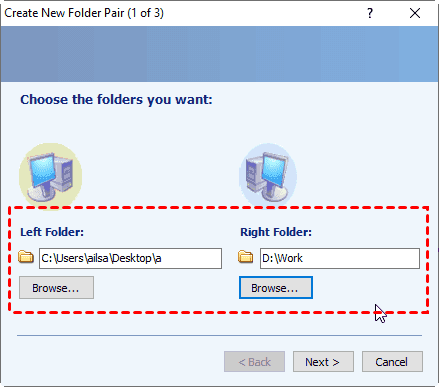 Step 4. Tick Synchronization, Echo, or Contribute as the sync method. Click Next >. 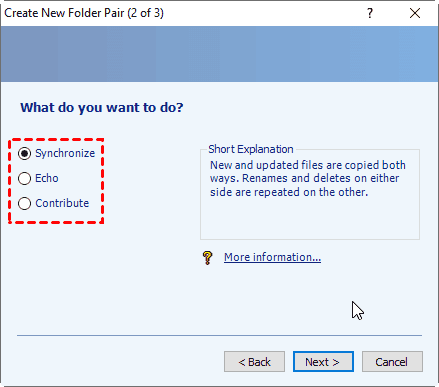 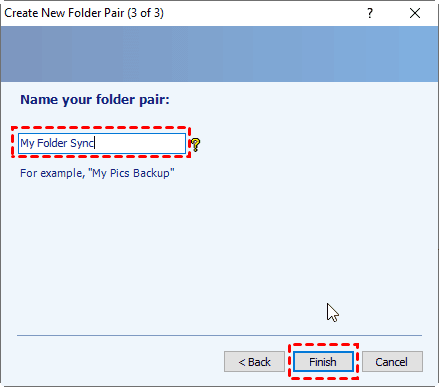 Besides, you could sync folders between two computers as well. It allows you choose a local folder, external devices like a USB flash drive, or a network shared folder from another computer.

If you prefer to sync 2 folders between Windows Servers, please try AOMEI Backupper Server to sync easily and enjoy more.