You will learn how to transfer OS to Samsung SSD without reinstalling Windows 11, 10, 8, 7 in simple steps.

Case: Can I just migrate OS to Samsung SSD?

My destination Samsung SSD is too small to clone

In fact, many users want to perform Samsung Data Migration OS only due to not enough space, but this software only allows you to clone all existing files and programs including the operating system from an existing HDD or SSD to a new Samsung SSD.  Thus, you can only use professional third-party system migration software.

Why Transfer OS to Samsung SSD?

Thus, if your computer has a long time to boot or low response in daily use, SSD drive will be your best choice. Among the famous SSDs like Toshiba OCZ SSD, Samsung 850 EVO SSD, SanDisk SSD, Seagate SSD, etc. Samsung SSD drives own a large number of users due to its excellent performance and good reputation.

Since Samsung Data Migration does not allow you to clone OS only, you could consider using more comprehensive software - AOMEI Backupper Professional. With it, you can choose to clone only OS to SSD or clone hard drive to SSD within a few clicks. And either way, you can enjoy the following advantages:

Smart cloning method: By default, this software clones only used sectors, which makes it easy to clone OS from larger HDD to smaller SSD without worry about disk space issue.
Compatible with all kinds of disks: It allows you to clone all brands of HDDs and SSDs, whether it's GPT and MBR disks, thus you can clone OS on Samsung SSD, SanDisk SSD, Seagate SSD, WD SSD, etc. SATA, M.2, NVMe, PCie SSD are supported as well.
Adjust partition size of destination disk: It is capable of extending system partition size with adjacent unallocated space in the System Clone feature. Also, you can manually or automatically adjust partition size of destination disk in the Disk Clone feature.
Further improve performance of SSD disk: It is able to accelerate the reading and writting speed of SSD disk if you check the SSD Alignment feature during the process.

With AOMEI Backupper’s user-friendly GUI, you can complete the Samsung OS migration job without effort. What’s more, the Samsung migrate OS to SSD process will be running in the background and it won’t interrupt your operation with the PC. Keep reading and follow the detailed steps to clone OS to Samsung SSD.

How to Transfer OS to Samsung SSD without Reinstalling

Before you start, connect the Samsung SSD drive to your PC, and download AOMEI Backupper to have a try if you use Windows 11/10/8/7/XP/Vista. For server users, try AOMEI Backupper Server.

(PS: The Clone features in the free trial version can be demonstrated only, to transfer OS to Samsung SSD and boot from it, please upgrade now and you can enjoy 20% discount.)

Step 2. Select the new Samsung SSD as the destination disk to save the OS from your hard drive. It will automatically select the system partition and system reserved partition.  Then click Next.

Step 3. Click Start Clone to clone OS to Samsung SSD drive. Make sure the SSD Alignment option is checked, since it can improve the reading and writing speed as well as extend SSD’s lifespan.

By default, this software clone only used sectors, but if your Samsung SSD has enough space, you can choose to clone all sectors of a hard drive with Sector by sector clone option. Please make sure the destination disk is equal to or larger than the source disk.

If you clone drive to larger drive, you may see Make full use of disk space as well. It will extend the size of your system partition by adjacent unallocated space.

How to boot from the cloned SSD:

How to clone OS only in laptop:

How to Transfer hard drive including OS via Samsung Data Migration

In case you want to clone the entire hard drive to Samsung SSD with Samsung Data Migration, here are the steps to make it.

Step 1. Shut down your PC and connect your Samsung SSD with the USB-to-SATA cable. 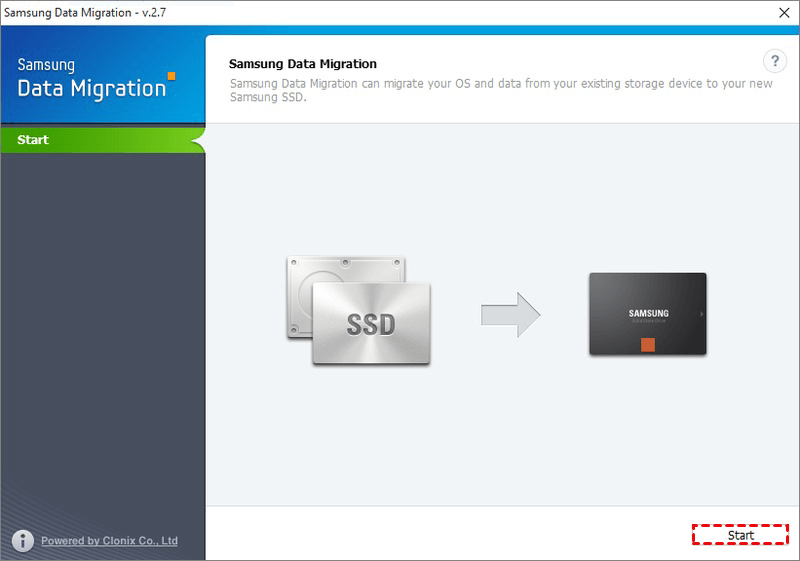 Step 3. Verify the source disk you want to move from and select the Samsung SSD as the target disk. The target disk will be overwritten, so please make sure you have chosen the right target disk.

Step 4. Click Start and hit Yes at the warning message. Wait for the cloning progress to be completed.

Step 5. Click quite to exit the software. Then turn off your PC and replace the original Samsung SSD with the new one and boot up from the new one.

You may get stuck in Samsung Data Migration Software cloning failed situation, like "Target Disk has been disconnected" or other error codes. The probable reason may be the boot information or boot files are damaged.

In addition, if there are more than two partitions on the existing hard drive, Samsung Data Migration will clone the first two partitions only. If you want to avoid annoying problems or want to clone multiple partitions to Samsung SSD, just pick AOMEI Backupper to help you make it.

Although Samsung Data Migration does not allows you to only transfer OS to Samsung SSD, you can still use AOMEI Backupper to finish Samsung OS migration within 3 steps. It clones only used sectors by default, thus you don't need to worry about issuficient disk space issue any more. And it supports expanding the size of system partition and boost SSD disk performance.

Meanwhile, AOMEI Backupper is also a comprehensive PC backup tool that can backup all important data on your new SSD in the future. In its Tech or TechPlus edition, you can deploy image to multiple computers at the same time. For differences, check the edition comparison page. Rush into this tool and discover more!