Solved: One of The Volumes Specified for Backup is Invalid

You will find the several solutions to fix the one of the volumes specified for backup is invalid error message and get better way to create a system image in Windows 10, 8, 7.

One of the Volumes Specified for Backup is Invalid

I got a message stating that “The backup failed. one of the volumes specified for backup is invalid because either not on a fixed drive, is not formatted NTFS, or is read-only. To convert the file system on a volume from FTA32 to NTFS, at an elevated command prompt type: CONVERT/FS:NTFS (0x8078011D)” when I try to create a system image in my windows 10 computer. 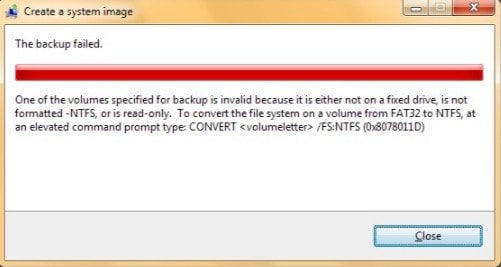 Thus, I did this conversion that convert the volume from FAT32 to NTFS file system. After that I found my computer couldn’t boot up, it’s so frustrating. Fortunately, I used WinPE and DiskPart to reformat the volume to FAT32, and then use the bcdboot to copy the boot files to it, then the computer can boot again.

I just confused about this problem? Can anyone give me some advices? Thank you in advance.

Why you get the “one of the volumes specified for backup is invalid” problem? There are some things you should know. When you try to backup your system to external hard drive, USB flash drive, or other devices, Windows built-in backup tools will image the partition associated with system files, including system partition, recovery partition, and EFI system partition.

Usually, the recovery partition is formatted with FAT32 instead of NTFS. However, as long as one of these partitions is FAT32, Windows built-in backup tools create a system image might probably failed. Thus, you’ll get this error message by system.

How to fix this problem? You might want to convert the recovery partition from FAT32 to NTFS. Nevertheless, this way cannot work in most cases, and this conversion may cause the computer can’t boot problem, it’s a risky operation.

Is there any other way to solve “the backup failed one of the volumes specified for backup is invalid” issue?

With AOMEI Backupper, you can bypass the “one of the volumes specified for backup is invalid” problem and create a system image without any issues. Detailed steps are listed below.

2. Select a target location to save the Windows 10 system image file as you want.

★Tips:
✍The program will select the source partitions associated with the Winodws 10 system files automatically.
✍Change “Task Name” box to separate from other backups if need be.

★Tips:
✍You could enable Options to customize the backup image, including compress, comment, encrypt or split the backup image, enable email or SMS notification, using volume shadow copy (VSS), etc.
✍To automatically backup Windows 10 system, you could click Schedule > General > choose one of the mode to backup: daily, weekly, monthly, event triggers, USB plug in.
✍Scheme: Please upgrade to AOMEI Backupper Professional or other editions to delete old backup images automatically while the number of backups exceeds the number you specified.

Wait for a moment, you will find the system backup has been created successfully, and the one of the volumes specified for backup is invalid in Windows 7/8/10 is solved at the same time. The time it takes will depends on the data size. After that, you can restore system to an early state when the Windows OS corrupted. In addition, AOMEI Backupper also provides many useful functions such as system clone, file sync, create bootable media, and other features.

There are some other Windows backup fails errors:

Let me explain details for you.

There is another Windows 10 image backup fails error message: The backup failed. There was a failure in preparing the backup image of one of the volumes in the backup set. (0x807800C5) 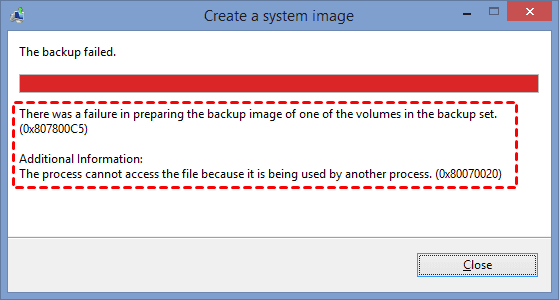 This backup failed error could be caused by the corrupt system files or the old backup files issues. Hence, don’t worry, we provide two ways to fix the error code 0x807800C5:

The system file checker will scan and fix corrupted system files. So, try the following steps to fix:

And then run the command: sfc /scannow

Now, create a system image for Windows 10/8/7 to check if the problem solved or not. If the error still exist, please try the Way 2.

Way 2. Clean Up the Backup Location

Run the system image backup, if you meet the same error with different details error: The specified backup disk cannot be found. Run the sfc /scannow to repair.

Error 2. Only volumes formatted with NTFS can be protected

Besides, you might encounter the error message while using Windows Server Backup: One of the source volumes specified has an invalid format and cannot be protected using Windows Backup. Only volumes formatted with NTFS can be protected. How to fix?

Or encounter the error message: The drive cannot be used to store a system image because it is not formatted with NTFS, you can use the following two ways to fix:

Fix 1: Format the FAT32 partition to NTFS in Disk Management. 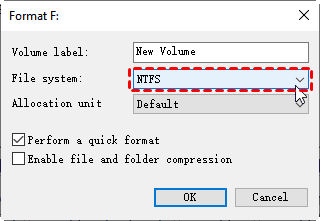 1. Input the cmd in Windows search box, and right click the command prompt and run as administrator.

2. Execute the command: convert e: /fs:ntfs to convert FAT32 partition to NTFS. (replace the e with the drive letter that has FAT32 file system)

3. Then input the volume label to start the convertion. 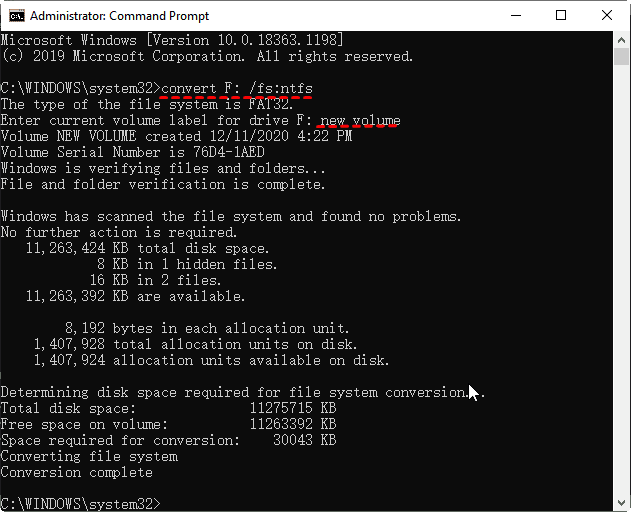 Tip: Input the following commands to locate the volume label:

After the process finished, you could create a system image using Windows Server Backup in Windows Server 2003, 2008, 2012, 2016, 2019. If you would like to manage backups more flexible, please try AOMEI Backupper Server.

You May Also Like
Solutions for Only Volumes Formatted with NTFS Can be Protected
7 Methods to Fix Backup Location Could Not Be Found
The Directory Name Is Invalid in Windows – Fixed with 7 Ways!
How to Backup and Restore EFI System Partition in Windows 7/8/10?