This article introduce you a very easy and convenient method about how to backup your memory card with a third party software free.

What is memory card?

Memory card is an electronic flash memory data storage device used for storing digital information. They are commonly used in portable electronic devices, such as digital cameras, mobile phones, laptop computers, tablets, PDAs, portable media players, video game consoles, synthesizers, electronic keyboards, etc. A memory card is also known as a flash card. And flash memory is nonvolatile, that is the memory card will not lose its data when removed from the device, and the cards can also be erased or reformatted and reused. Erase or reformat memory card will erase all of the data on it, if you want to keep the data, you can backup memory card by memory card backup software in advance. Besides providing non-volatile media storage, a memory card also uses solid state media technology, which lowers the chances of mechanical problems, such as those found in traditional hard drives.

There are a handful of different types of memory card on the market, each varying in size, compatibility, and storage capacity. Such as Compact Flash, SD card, Micro SD, MMC, SDHC card, Smart Media card, and so on.Here links to some information on the most commonly used types of memory cards are list below.

CF ( Compact Flash ): A 50-pin connection storage device. Compact Flash is a storage medium which commonly found in PDAs, digital cameras, and other portable devices. And the CF card a very large range of size, in terms of storage capacity, ranging from 2MB to 128GB.

SD card ( Secure Digital Memory card ): A new generation memory device based on semiconductor flash memory, and often used with cell phone. SD card was jointly developed by Panasonic, Toshiba and SanDisk in the United States in August 1999. The size of SD card is just like a stamp, and weighs only 2 grams, but it has high memory capacity, fast data transfer rate, great mobility flexibility, and good security. And it is an integrated solid media and no moving part, so do not worry about mechanical damage.

SDHC card ( Secure Digital High Capacity Card ): An improved version of the standard SD card with a storage capacity up to 32 GB. Because SDHC works differently then a standard SD card, it is not backward compatible with legacy SD devices.

SM card ( Smart Media card ): A type of flash memory card, was also one of the first memory cards to be produced and used in digital cameras and other electronic devices. The SmartMedia card had a smaller capacity, ranging from 2 MB to 128 MB.

Sony Memory Stick: The first mobile storage media developed by Sony Corporation of Japan. It is used in Sony's PSP, PSX series game consoles, digital cameras, digital video cameras, as well as notebooks. It is used to store data, which is equivalent to the computer's hard disk.

xD-Picture Card: A flash memory card, was used in a limited selection of electronic devices, including digital cameras. Olympus and Fujifilm were the two brands of devices to utilize the xD-Picture card.

No matter what type of memory card you use, backup memory card is very important for data security.

Why you need to backup memory card?

Both memory cards and SSDs are stored in flash memory. Although flash memory is non-volatile, it is much harder to recover data than mechanical hard disks if there is data corruption or data loss. So you’d better not use the memory card to save data for a long time. In order to protect the security of data, memory card backup is a good choice.

How to backup memory card?

For a backup of memory card, you can back it up to the cloud drive ( which cloud provides a desktop synchronization application, like Google Drive, One Drive and Drop Box ) or other external drive, or your computer. Here provides you two methods of how to backup memory card.

Step 1. Take out your memory card from your device like a camera, phone, etc. Then use a USB card reader to connect the card to your computer. And ensure it can be detected.

Step 3. Find and double-click your memory card to open it. Then, copy the files you need to backup and paste them into your computer

Copy and Paste is a very simple and practical way for many users. But this way is only suitable if you only transfer a small amount of data. While you need to move a mass of data, this way will cost much time. To overcome the limitations of Copy and Paste, you can use a free memory card backup software AOMEI Backupper, so that you can easy backup and restore the data on your memory card.

AOMEI Backupper is a great free memory backup software, with this freeware, you will save much time to backup memory card than before, it becomes easier and more quickly, and you can use it to backup memory card to cloud drive, external hard drive, or other place simply. What’s more, this Software supports Windows XP, Windows Vista, Windows 7/8/10, etc. Besides, it offers you more useful functions, including Backup, Restore, Clone and other Utilities. And the method of memory card backup is below:

Step 1. Plug in your memory card to your computer. 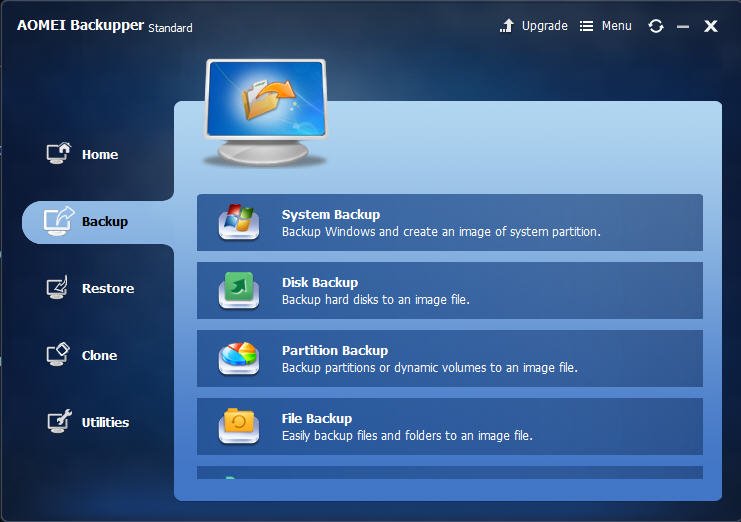 Step 3. Find the Removable Disk you plug in and select it as the Source Disk. And then, select a location on the computer as destination path. After that, click “ Start Backup “. 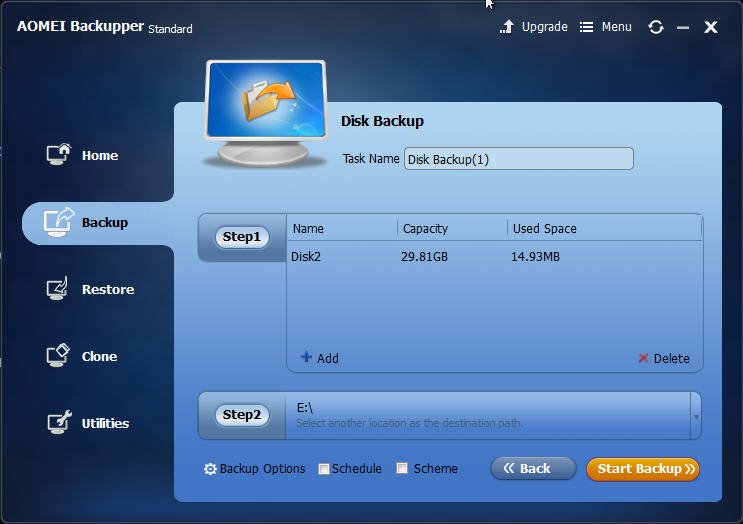 (Make sure the capacity of the destination path you select is larger than the size of the data on the source disk.)

Note : AOMEI Backupper should be the best memory card software. It supports incremental/differential backup, and you can save a lot of space by backing up the changed/modified data while keeping backup up-to-date. It gives you Backup Options, Schedule and Scheme. You can compress or encrypt your backup in Backup Options, backup data on memory card at a regular basis in Schedule. And in Scheme, you can delete older backup versions and manage your backup disk space. However, this feature is only available on AOMEI Backupper Professional. If necessary, please upgrade it at first.