You will learn how to clone Windows Server 2011 system drive to new hard drive without reinstalling everything, two ways in total and apply to both WHS and SBS Edition.

Why need to clone Windows Server 2011 to new disk?

Windows Small Business Server 2011 is commonly used in small and medium-sized business and plays a vital role in computer management. Normally, it contains data and information of the entire company and some important files of clients which require a lot of room. As for Windows Home Server 2011 users, the Server includes the valuable pictures of families and wonderful shared videos and music.

As time goes by, you may find a lack of space on the hard drive because you can hardly install new applications or store some large size files. Even worse, the running speed of the computer is getting slower and slower. At this time, it is advisable to clone Windows Server 2011 to a new hard drive with a larger capacity to make good use of the operating system.

In another situation, say upgrading the hard drive, you can clone hard drive of Windows Server 2011. The OEM offered a disk with a large size - HDD (Hard Disk Drive) when the computer was produced. Yet the performance and stability of this kind of disk are nowhere near as good as the SSD (Solid State Drive), and you discovered it. Therefore, it is a wise move to clone hard drive to SSD to experience a better performance.

Furthermore, the high-tech brings convenience to our daily life. The risk of losing data and the attack of virus follow meanwhile. Then you may need to make a duplication of your computer as the disaster recovery plan.

It's disappointed that Windows Server 2011 does not provides you with cloning software, but only one backup utility - Windows Server Backup. It helps you achieve the same effect, but the process is more complicated. It requires a storage device to store backup image temperarily and you are able to boot from it after restoring system image to your computer.

To avoid these tedious steps, it's suggested to use a full-featured and enterprise-level server cloning software, AOMEI Backupper Sever, for example. It is And you can directly run the system directly after cloning.  Below are the advantages of it:

It is able to clone system, disk or partition in Windows Server 2011 and other systems. The previous two options support cloning hard drive with Windows installed on it.
By default, it uses Intelligent Clone feature, which clones only used sectors and skip bad sectors. Thus, you can easily clone larger drive to smaller drive and clone hard drive with bad sectors.
It is capable of cloning MBR disk to GPT without data loss, and vice versa. It integrates with MBR to GPT convert tool, which will handle cloning between different partition styles very well. And you can boot from new hard drive successully.
If the target disk is larger, you are able to adjust partition size manually or automatically without leaving unallocated space.

Download AOMEI Backupper Server (30-day free trial) and have a try. Install and launch it on Server 2011. To protect unlimited PCs or servers, try AOMEI Backupper Technician or TechPlus edition.

(Note: The Clone feature in the trial version can only be demonstrated. To clone Windows Server 2011 to new hard drive, you need to upgrade server trail at first.  )

How to clone Windows Server 2011 to new hard drive

Here you will use AOMEI Backupper Server to clone Windows Server 2011 to new hard drive. You have two ways in the following:

Way 1: Clone Windows Home Server  2011 system drive. This way will use System Clone feature and it will includes the operating system, settings, data, programs etc on the system partition.
Way 2: Clone entire hard drive in Windows Server 2011 to new disk. Similar to Way 1, but it will include all the data on the non-system partition and requires new hard drive with greater capacity.

After getting info about cloning Windows Server 2011, you need to prepare a new hard drive and insert it into your computer. Also, it's essential to backup files in advance, since the destination disk will be overwritten after cloning.

Step 2. Choose the new hard drive you prepare to store all the data on the system partition. The source partitions (C drive and System Reserved Partition) are selected by default.

Step 3. Check on the Operation Summary page. If all things are right, you can click Start Clone to clone Windows Home Server 2011 system drive. 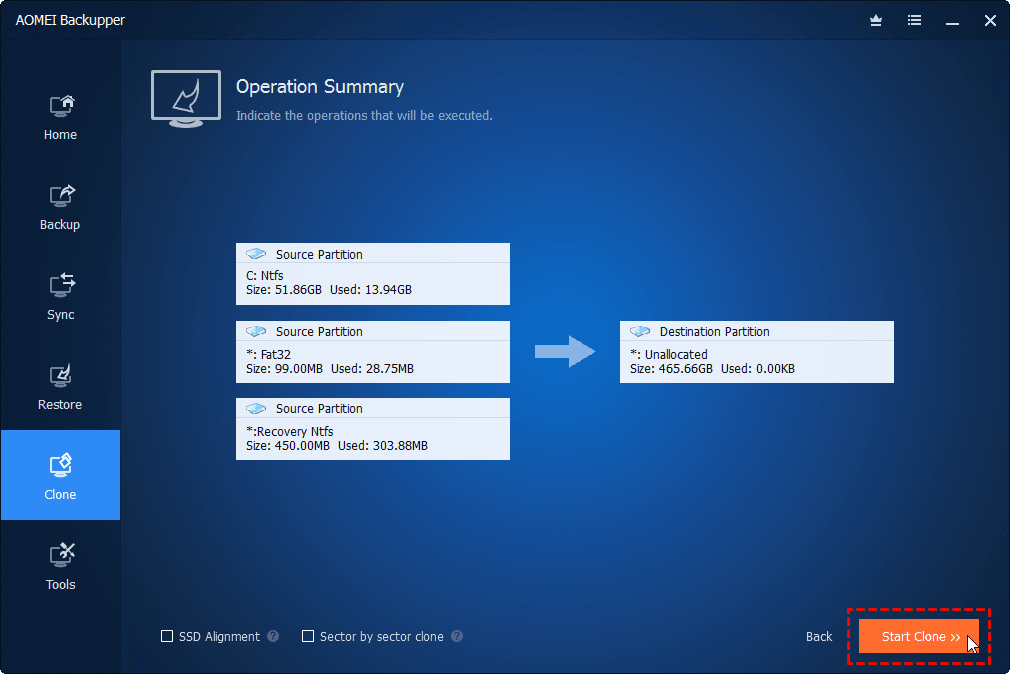 Step 2. Choose the original hard drive on server 2011 as the source disk and click Next.

Step 3. Select the new hard drive to store data you want to clone and click Next. 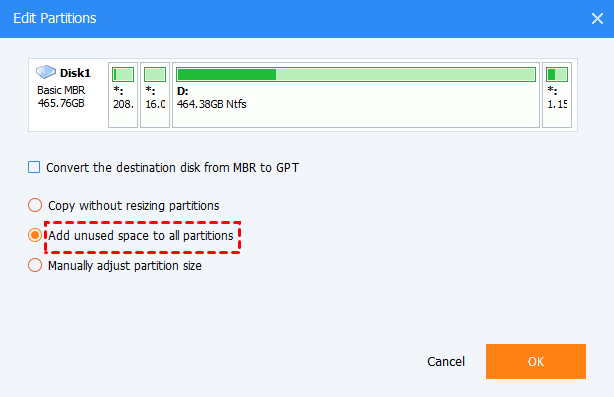 After cloning, you could try to boot from the new hard drive and see if it is bootable. Otherwise, you don't have a usable copy.

This method is more suitable for cloning hard drive on the current computer. If you want to migrate Windows Server to new hardware, try backup and restore feature. It integrates with Universal Restore feature and is able to install all the necessary drivers for system startup.

And it provides you with multiple useful features. You can clone HDD/SSD and MBR/GPT disk while ensuring secure boot, regardless of disk capacity. It is able to make full use of unallocated space if the target disk is larger, whether you are cloning system partition or entire drive.