iPhone 11 Won’t Turn on After Update

I am using 11 right now. But after update to the iOS 15 phone won’t start. I had tried to charge the phone but the found same result. Any suggestions?

- Question from an iPhone user 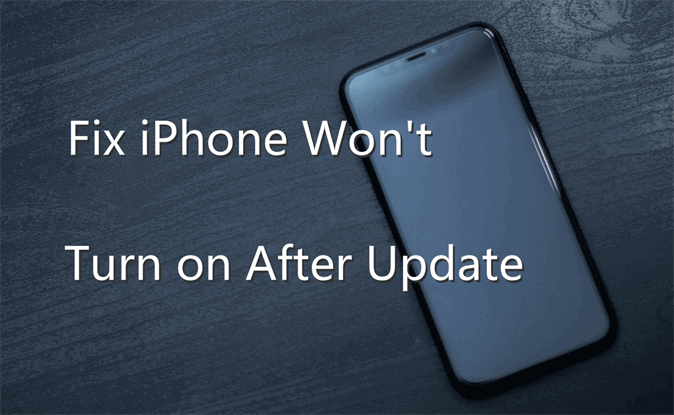 Why My iPhone iPad Won’t Turn on After Update?

Excluding physical or liquid damage, the following are the main reasons that may cause the “iPhone won’t start after update” problem.

- Your device has run out of battery. The upgrade process may run the battery down. A lot has to happen in the background to bring things back to normal after an update and it will consume more power.
- iOS crashes. The software crashes can cause many problems and usually, a force restart can help remove those bad data bits.
- The firmware is damaged. When something goes wrong during the iOS update, the firmware will be damaged and you find your device won’t turn on. Sometimes you may find your iPhone stuck on spinning wheel or Apple logo screen.

How to Fix iPhone Won’t Turn on After Update?

Try these methods one by one to troubleshoot the iPhone iPad won’t turn on after update problem.

A force restart will refresh your device’s memory and reload all services. It can help fix the "iPhone won’t turn on after update" problem caused by firmware crashes.

Press and hold the Top button and Volume Down button together > Release both buttons when the Apple logo appears.

Hold down the Home button and the Top (or Side) button at the same time > Release both buttons when the Apple logo appears.

When the firmware has been corrupted, you need to restore your iPhone to get rid of the iPhone iPad won’t turn on after update issue.

1. Download and install the latest version of iTunes on computer.

2. Run iTunes and plug in your iPhone or iPad.

- If a window pops up and says that you’re required to restore or update your iPhone, just follow the onscreen instructions to make it.

- Or you can force restart your device to put it in Recovery Mode and pop up window will appear.

If the Recovery Mode can’t help you fix the iPhone won’t turn on after update problem, you can put your device in DFU (Device Firmware Update). Compared to Recovery Mode, DFU is a deeper restore that is more comprehensive and used to solve more difficult and serious problems.

1. Make sure you have installed the latest version of iTunes on computer.

2. Plug in your iPhone and run iTunes.

3. Put your device in DFU Mode.

● For iPhone 6s/6s Plus an earlier & iPad with Home button:

Your iPhone screen display will be completely black if you have successfully entered DFU Mode. Try again if it’s not.

That's all about how to fix iPhone won't turn on after update problem. Before contacting Apple support for help, you can try the above methods to make your device respond again. Does this passage solve your problem? If so, you could share it via Twitter or Facebook to help more people.