This article will answer your questions, including what is U.2 SSD, what is the difference between U.2 SSD and M.2 SSD, and how to clone U.2 Samsung SSD with Samsung SSD cloning software.

In the past, M.2 SSD was known as the fastest SSD on the market. But now there is a new U.2 SSD and many users are wandering if it’s faster than M.2 SSD, even M.2 NVMe SSD. And what are the difference between them? How to clone the new U.2 SSD, such as, Samsung 983 DCT? This article will reveal the answer for you.

Then, let's have a glance about this article.

U.2, formerly known as SFF-8639, is a new form factor of SSDs including physical connector, electrical characteristics, and communication protocols. It has four PCIe lanes and two SATA lanes. And it was developed as enterprise SSD and can be used with PCIe drives, NVMe drives, SAS drives and SATA drives. 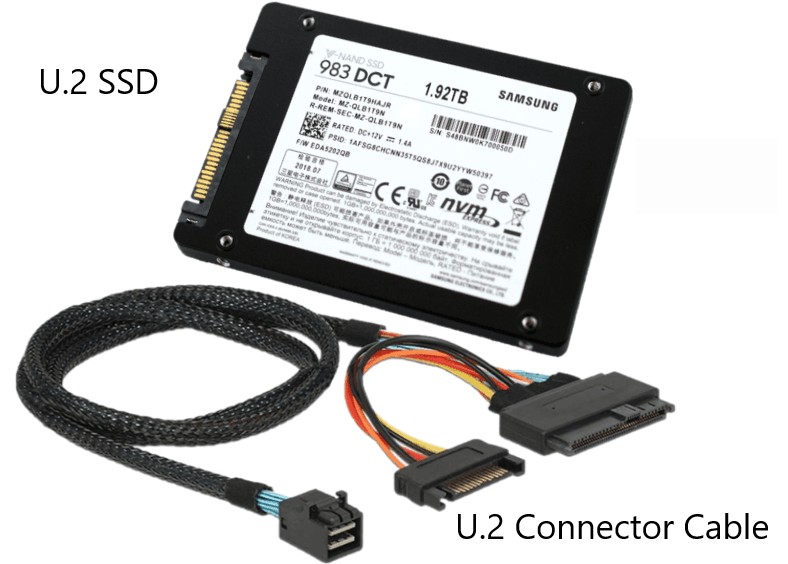 Presumably you now have a general understanding of U.2 and the difference between U.2 and M.2, then you can choose which type SSD you want to use. In a simple word, U.2 SSD can balance performance and capacity well.

Among U.2 SSD, Samsung 983 DCT, known as Samsung enterprise SSD, is a great choice for disk upgrade. Because it has high performance, large capacity and reasonable price, lower than the best U.2 SSD under the same capacity, namely Intel Optane 905P and Intel 750 Series.

SSD cloning software is an indispensable tool for users to replace old or damaged hard drive with an SSD disk. I strongly recommend you free AOMEI Backupper Standard because of the following outstanding features.

How to clone Samsung U.2 SSD in Simple Steps

Then, I’ll show you how to clone hard drive to Samsung U.2 SSD easily and quickly. But before you start to clone, please check the following things.

Now, taking the Samsung enterprise SSD Samsung 983 DCT as an example, the entire cloning process should be as follows.

Step 1. Connect Samsung 983 DCT to your computer via U.2 adapter or enclose, and make sure it can be detected. Open U.2 SSD cloning software, then click “Clone” and “Disk Clone” in order.

Step 2. Choose the current running disk as source drive and click “Next”.

Step 3. Select Samsung U.2 SSD as destination disk and click “Next” to move on.

Step 4. Tick “SSD Alignment” to accelerate the reading and writing speed of the Samsung U.2 SSD. Confirm everything is OK and click “Start Clone”.

Tips:
◓ To make full use of U.2 SSD disk space, you can use “Edit Partitions” in AOMEI Backupper Professional, having three options, including “Copy without resizing partitions”, “Add unused space to all partitions”, “Manually adjust partition size”.
◓ To clone all sectors of the currently running disk, you need to check “Sector by sector clone” option at the bottom.
◓ To start a computer unbootable, please create a bootable media at first.
◓ To clone only system on your computer, you could use "System Clone (supported by AOMEI Backupper Professional)" feature.

Notes:
◓ Don’t boot your computer with SSD externally, because it may not work well. Please swap hard drive of your computer with a screwdriver and install the U.2 Samsung SSD inside.
◓ Change boot order before booting from the cloned U.2 SSD. Restart your computer and press the specific key at the initial screen, ie, F2 or ESC, go to Boot tab and set the cloned SSD as the first boot options, finally save changes and reboot.
◓ Change boot mode if the partition style is different, from Legacy BIOS to UEFI or UEFI to BIOS.
◓ Don’t format HDD before you can boot your computer from the cloned SSD. Then, format HDD and use it as storage if it’s still working.

That’s all for U.2 SSD and how to clone U.2 Samsung SSD effortlessly. Although U.2 SSDs are not the fastest SSDs, but it’s a compromise between performance and capacity. Therefore, it’s still worth getting one U.2 SSD like Samsung 983 DCT.

Free disk cloning software, AOMEI Backupper Standard, can be a great choice for you to clone HDD to U.2 Samsung SSD or other branded U.2 SSD, such as, Intel Optane 905P. Also, it allows you to clone NVMe to NVMe, clone SATA to SATA, clone M.2 to M.2, clone PCIe SSD, clone Windows 10 to NVMe SSD, etc. Why not give it a try now?