You will learn how to migrate Windows 10 to smaller SSD without boot issue. No reinstallation and data loss.

Why move Windows 10 to smaller SSD?

Migrating Windows 10 to smaller SSD is transferring your Windows 10 by cloning it to SSD. The reason why we want to migrate Windows 10 to SSD concludes many aspects. The following are the detail points.

● Firstly, we can improve computer performance by migrating Windows 10 to smaller SSD. It is determined by the features of SSD. SSD does not have mechanical components, therefore, its speed of reading and writing is much faster than traditional hard drive.

● Secondly, SSD is more expensive than traditional HDD in the market. An SSD is smaller than an HDD usually at the same cost. Thus, a smaller SSD is more affordable than a larger one.

Can I move Windows 10 to a smaller SSD?

"I’m planning to upgrade my hard disk drive in Windows 10 to an SSD disk, but the problem is SSD only has 256GB while HDD is 1TB. Is it really possible to move Windows 10 to a smaller SSD? I don't want to reinstall the operating system on the new SSD if there is another viable way. ”

The answer is Yes, you can migrate Windows 10 to smaller SSD as long as you use a professional disk cloning software that clones only used sectors of a hard drive. And I will introduce you to one such software below and how to migrate Windows 10 without data loss.

AOMEI Backupper Professional is one of the best system migration software for Windows 10, which can help you clone Windows 10 to a smaller SSD successfully. Thus, you can use it to replace the original HDD and boot from it. It has perfect cloning function in the following.

3 cloning solutions: It supports "Disk Clone", "System Clone", "Partition Clone", and the previous two are able to migrate OS to smaller SSD. To clone OS only, use "System Clone" feature.  To clone entire hard drive to smaller SSD, use "Disk Clone feature".
2 cloning methods: By default, it uses "Inteligent Clone" feature, which clone only used sectors of hard drive. Also, you can choose to clone all sectors of hard drive with "Sector by Sector Clone" feature, whether it's used or not.
4K alignment technology: Its "SSD Alignment" features allows you to improve performance of SSD disk.

In addition, AOMEI Backupper has a user-friendly GUI. The delicate designed interface and wizard make it an easy to use the software.

How to migrate Windows 10 to smaller SSD without reinstalling

It is a good habit to backup data before any disk operation. If you don't have, you can backup data to external hard drive using Disk Backup in AOMEI Backupper. Please download and install it on your computer.

(PS: The clone feature can only be demonstrated in the free trial version. You need to upgrade if you want to migrate Windows 10 to smaller SSD with cloning solution and enjoy 20% off discount.)

Step 1. Plug your SSD into your computer using the USB-to-SATA cable. Then launch AOMEI Backupper, click the System Clone under the Clone option.

Step 2. The program will automatically select the system partition and system reserved partition. Just select your SSD as a new location for Windows 10 and click Next (take the Disk 2 for example).

Step 3. You will see an Operation Summary which indicates the operation that will be executed. Tick SSD Alignment box to improve the reading and writing speed as well as extend SSD’s lifespan. Then, click Start Clone to migrate Windows 10 to smaller SSD. 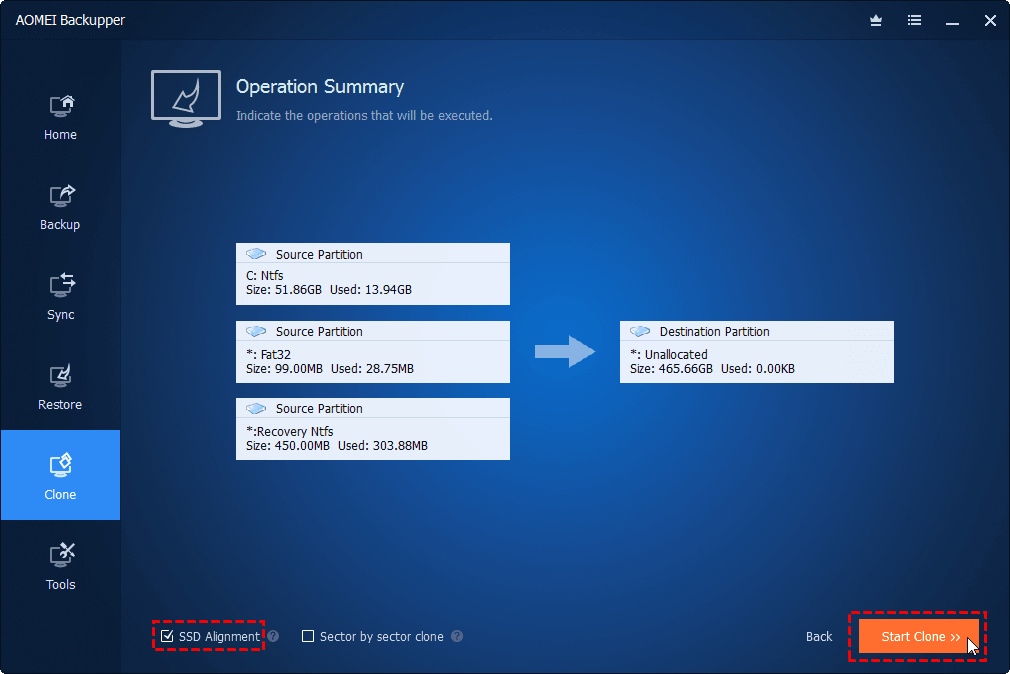 Note: If you select Sector by sector clone, it will clone all sectors. Please make sure the destination disk is equal to or larger than the source disk.

Click Finish when the cloning process is done. Then enter into BIOS and set SSD as the first boot disk, boot from it. The original drive will not be wiped out and you can use the original drive as secondary storage. Or you can also choose to backup SSD to HDD in case of a system crash.

You can easily migrate Windows 10 to smaller SSD and boot from it successfully with the help of professional disk cloning software - AOMEI Backupper. It clones only used sectors on a hard drive by default, therefore you just need to ensure the used space of the original disk is smaller than or equal to target disk. Besides, it still supports cloning hard drive to larger drive.

Meanwhile, AOMEI Backupper is also a comprehensive backup tool. It offers various backup options including system/disk/partition/file backup that can meet almost all your needs in computer backup. Just explore it by yourself now!