Learn the detailed steps to clone 2TB MBR to 3TB GPT disk without reinstalling Windows or programs and use the full capacity of 3TB.

If you want to use a 3TB hard drive to replace your 2TB drive in order to store a large amount of stuff like high definition videos and database on your computer, there are things you need to consider.

To be able to use the full 3TB disk space, you have to initialize the 3TB hard drive to GPT partition style, which requires UEFI boot mode to load system from a GPT disk. If your original hard drive is an MBR disk that uses Legacy BIOS based boot mode, things will be tricky to clone hard drive from MBR to GPT disk as they require different firmware.

Most of the computers have support for UEFI boot mode. Make sure that your computer supports UEFI mode in BIOS, and then you can work on cloning hard drive from 2TB to 3TB.

The best way to clone MBR disk to GPT disk

First, you may want to use Windows built-in backup and restore tool to restore an image backup of your hard drive to the 3TB drive. After loading to the restore interface, you will receive an error that system image restore fails because of EFI/BIOS. Since Windows backup will not work on this, it brings the second choice, that is third party software.

Most of the cloning programs allow you to clone MBR to GPT disk. How they make this possible? The regular cloning will wipe your 3TB disk clean and then convert it to MBR disk, which exactly is doing an MBR to MBR clone. It works and allows you to boot from it without a problem. However, as mentioned, your 3TB hard drive becomes an MBR disk, and the problem is an MBR disk only supports up to 2TB disk space, leaving you almost 1 TB space unusable.

Luckily, there is another powerful cloning software, AOMEI Backupper Professional that allows you to clone MBR to GPT without changing its partition style. In order to make the cloned disk bootable, it will create an EFI partition automatically in the cloning process. After the cloning, you only need to change Legacy to UEFI boot mode, and then you can enjoy your full 3TB system disk.

How to clone to 3TB GPT disk in the easiest way?

As a specialized hard drive cloning software, AOMEI Backupper Professional has made it very easy to clone hard drive between MBR and GPT disks. All versions of Windows 8/8.1/10 and 64 bit Windows 7/XP support booting from GPT disk. Make sure your operating system and your computer both support UEFI boot mode and then get started.

1. Install and run this program for hard drive cloning.

2. Click “Clone” in the main interface and then select “Disk Clone”. If you only want clone system, you can select “System Clone”. 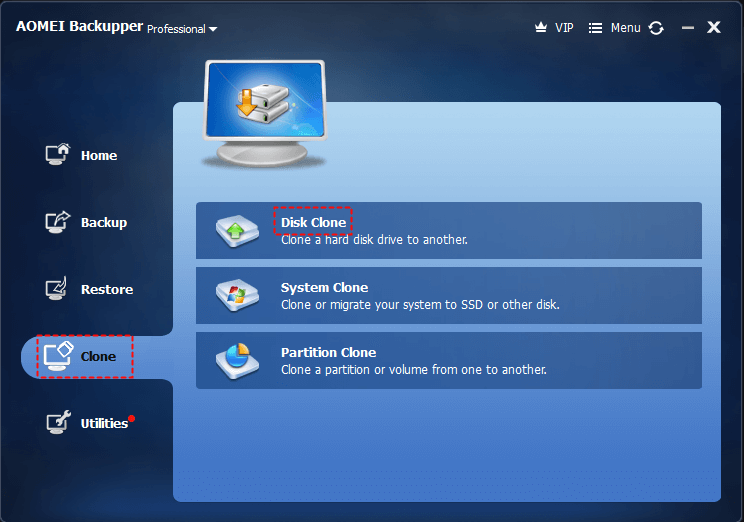 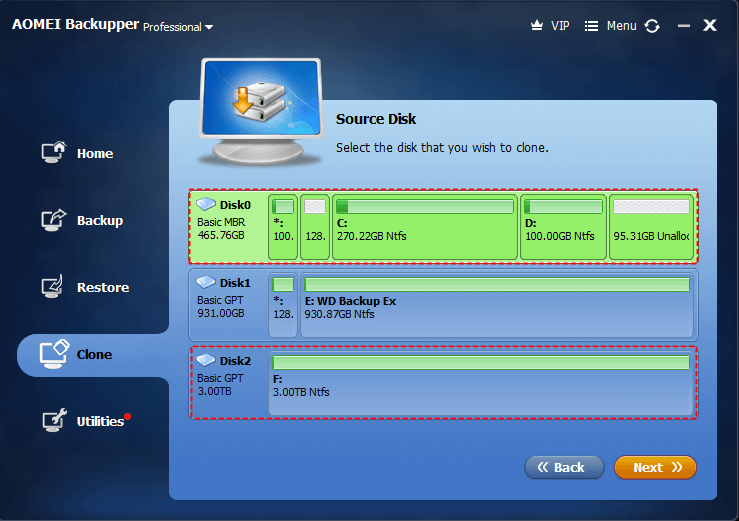 4. Then it will bring you the Operation Summary screen. Confirm the operations and click “Start Clone” to start the cloning process. 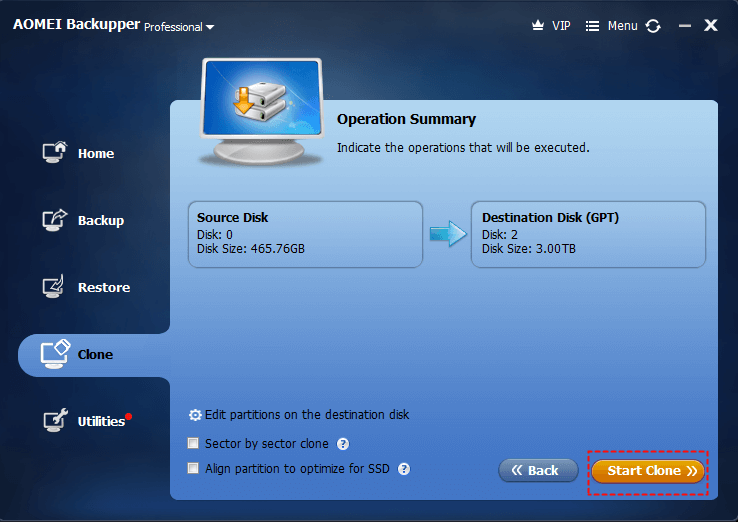 While cloning hard drive, you can also use the computer. Besides the ability to clone 2TB MBR to 3TB GPT hard drive, AOMEI Backupper also provides backup and recovery features. Therefore, you can create a disk backup of the 2TB MBR hard drive and then restore it to the GPT disk.