Many reasons can cause system image backup failed in Windows 11, 10, 8, 7. This article includes 4 solutions to fix 3 different situations and a free backup tool to create system image easily.

System image backup failed due to many reasons

A Windows System Image backup contains all the system files and personal files on your system partition at a point of time. It allows you to perform a full system restore when your computer stops working, so you do not need to reinstall all Windows or programs again.

Based on your own situation, you can find the corresponding solution to your problem.

Situation 1: Has the shadow copy on another volume 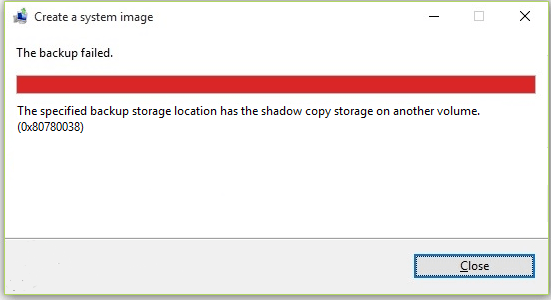 As the error message indicates, there are some problems with the target backup location that caused Windows backup unable to save image backup there. You can try the following steps to troubleshoot and fix the problem.

Press Windows + X key to open a command prompt. Then type “SFC /SCANNOW” (without quotes) and press Enter. This will fix this problem or at least tell you what went wrong. When this finishes, you should be able to create system image backup without errors.

After a system restore point is created, you can try system image backup again. 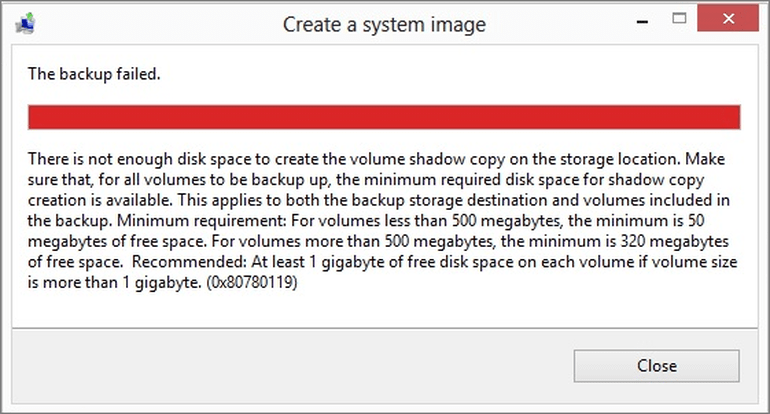 This error only happens when you are trying to backup volumes larger than 2TB in Windows 7. In Windows 7, Windows backup creates a virtual hard disk (.vhd) to store the image file. When you try to create a VHD file, it cannot be larger than 2040GB.

With this limitation, Windows 7 will not allow you to backup volume larger than 2088958MB. To work this around, you can shrink your volume or upgrade your system to Windows 8 or Windows 10/11.

In the later versions of Windows, system image backup is saved in an advanced virtual disk format .vhdx, which does not have the size limitation.

Easier way to create system image backup without having these issues

If Windows 7/8/10/11 backup keeps failing after trying all these steps, you can turn to the best free backup software AOMEI Backupper Standard.

Learn how to create a system image of Windows 11/10/8/7 with AOMEI Backupper below.

Step 2. Click the Backup tab and then select System Backup.

Step 3. The program will select all the system and boot related partitions automatically, so you just need to select the destination path.

Tip: You can save system backup image to the system disk with AOMEI Backupper, but it is not advisable. You should save the backup to external hard drive, NAS or other offsite locations.

>> Options: You can enable email notification, choose the compression level for the backup image file and select intelligent sector backup or sector-by-sector backup.
>> Schedule Backup: You can set up a schedule to automatically create system image backup to protect your newly added files and programs.
>> Backup Scheme: You can choose Full/Incremental/Differential Backup as the way to run the scheduled backup. You can also set a scheme to automatically delete old backups to free up space for the next backup, so the backup drive will never run into low disk space. (Differential backup and auto backup deletion are available in Professional edition or higher.)

After the backup completes, you can create a bootable media, so you can restore the backup when system is unbootable.

If you want to restore the system image backup to another computer which has dissimilar hardware in the future, it is suggested to try Universal Restore feature in advanced editions.