How to Fix Windows 10 Booting from Wrong Drive Easily

You can learn the reasons for Windows 10 booting from wrong drive as well as 5 different solutions to fix the problem. The easiest one will also be included in this article. Please read on.

“I bought an SSD, installed windows 10 on it, and then plugged in the HDD that I used before as it has 2TB and the SSD only 250GB. I want to use the SSD for Windows and a few games and apps, and then the HDD for other storage.

Whenever I turn my computer on it starts up with the HDD instead of the SSD even though the SSD has priority in the BIOS. When I manually force the computer to boot with the SSD, everything works fine. But it won't do it by itself. How to fix the problem? Any help would be appreciated!”

If you are also experiencing Windows 10 booting from wrong drive, you can read on to learn the reasons and how to fix the problem in different ways. 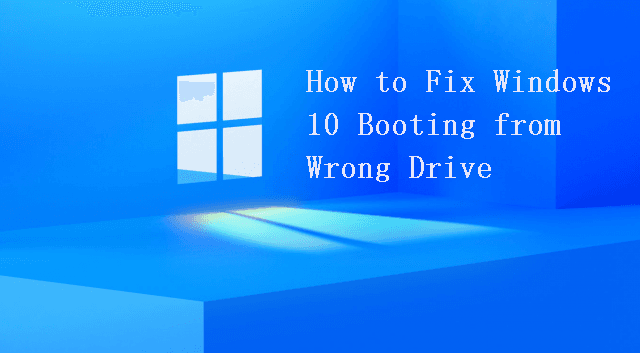 Why Windows 10 Booting from Wrong Drive?

There are various reasons for this problem, such as errors with the BCD, changes you have previously made to the computer settings, not changing the boot sequence before booting, boot mode errors, SATA cable connection errors, etc. And you can follow the next part to find the solutions. You can continue reading for more details.

How to Fix Windows 10 Booting from Wrong Drive

Next, we will provide the different solutions for fixing Windows 10 booting from wrong drive. You can choose the corresponding method based on your own situations.

Some users have feedbacked that disabling UEFI can solve the problem of Windows 10 booting from wrong drive. Here are the specific steps.

Step 1. Click the gear icon on the Start menu to open Windows Settings. 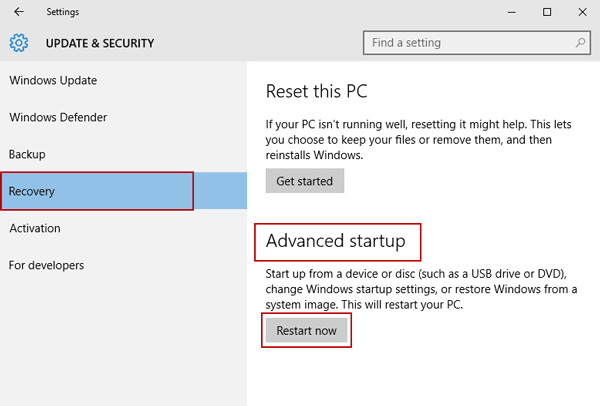 Step 3. Click Troubleshoot > Advanced options > UEFI Firmware Settings, then click the Restart button. Your system will restart and take you to the UEFI BIOS.

Step 4. When you're on the UEFI utility screen, go to the Boot tab on the top menu. Use the arrow key to go to the Secure Boot option and then Use + or – to change its value to Disable. 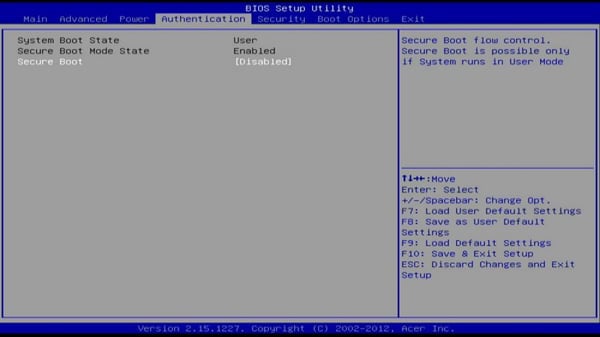 Depending on the motherboard's BIOS/ UEFI firmware, the Secure Boot option will be found on the Boot, Security, or Authentication tab.

If Windows 10 is booting from the wrong drive because of an error in BCD, you can use Bootrec.exe to repair the BCD. Here are the specific steps.

Step 3. In the pop-up command prompt, type bootrec.exe command to launch this tool.

Step 4. To fix the Windows 10 booting from wrong drive, please execute and the following commands.

Change the Boot Order from BIOS

If you boot your computer directly after cloning your HDD to SSD, your Windows 10 is probably booting from the wrong drive because the computer may recognize the HDD as the boot disk. So after cloning you need to enter BIOS setup and change the first boot option to the cloned SSD. You can know how to change boot drive in Windows 10 with the following steps.

Step 1. Restart your computer and continue pressing F2/F8/Del (different computer may have different hotkeys) to enter the BIOS settings.

Step 2. Go to the Boot tab to change the boot order. Set the cloned SSD as your first boot option.

Step 3. Press F10 to save the changes and exit. Then restart your computer to see if the problem has been solved.

If you have multiple drives connected to your computer, the system may not recognize the correct bootable device. You can try to remove other drives first and then restart your computer. Many users have said that after removing the other bootable devices, Windows 10 boots from the SSD properly.

When you encounter the problem of Windows 10 booting from wrong drive, the previous methods can help you. But if you can't identify the exact reason or you're worried about making a mistake while fixing the problem, you can choose the easiest way to achieve the goal. That is to clone HDD to SSD with the reliable disk cloning software AOMEI Backupper Professional. After cloning you can successfully boot your system from the cloned SSD. It also has the following advantages.

Secure boot: It allows you to boot your computer from the cloned SSD successfully after cloning.
Intelligent clone: Under the default situation, it will only clone the used sectors. Therefore, if you want to clone larger HDD to smaller SSD, this feature will be very helpful.
SSD alignment: It can accelerate your SSD’s reading and writing speed.
Sector by sector clone: If your SSD has the same size or larger than your HDD, you can use this feature to help you clone the sectors no matter they are used or not so that you won’t miss any sectors on HDD.
Multiple systems: It supports many different operating systems, such as Windows 11/10/8.1/8/7/XP/Vista, etc.

Before you start the cloning process, you need to do some preparation work.

Then you can follow the graphic tutorial below to fix Windows 10 booting from wrong drive problem.

The Professional edition supports cloning both data disks and systems disks from MBR to MBR/MBR to GPT, or GPT to GPT/GPT to MBR. If you only want to clone data disks, you can pick the complete free Standard version.

Step 2. Choose the HDD as the source disk. Then, click Next.

Step 3. Choose SSD as the destination disk. Then, click Next.

Step 4. Tick SSD Alignment to make your SSD perform better and click Start Clone. After cloning, you can change the boot order in the BIOS and directly boot Windows 10 from cloned SSD.

When Windows 10 booting from wrong drive, you can use the methods mentioned in this article to help you. If you know the exact cause, you can choose the corresponding solution. While if you don't know the exact reason or you are worried about making a mistake in the operation, we recommend you to choose the easiest method, which is to use the safe and professional disk cloning software AOMEI Backupper Professional to help you solve the problem.

It can clone HDD to SSD easily in just a few simple steps, and after cloning, you can successfully boot your computer from the cloned SSD. It also supports cloning a larger HDD to a smaller SSD as well as partition clone if you need. Besides, you can also enjoy System Clone and more useful features.

You May Also Like
Quick Fix: Cloned SSD Won’t Boot in Windows 11, 10, 8, 7
Restore Windows 10/11 System Image to New Hard Drive | 2 Ways
System Reserved Partition on a Wrong Drive – How to Move It