Receive SMART Status Bad Error, What Should You Do?

When failed to boot computer with Pri Master Hard Disk SMART Status BAD error, you should backup important data to another location before the hard drive fails completely.

How bad is this problem?

If your computer fails to boot and give you the message "Pri Master Hard Disk: S.M.A.R.T. Status BAD, Backup and Replace Press F1 to Resume”, then the primary hard drive (boot disk) is failing or have failed already according to the error. If you have more than one hard drive installed in your computer, you may get the "Sec Master Hard Disk: S.M.A.R.T. Status Bad", which means the data disk is having problems. The S.M.A.R.T. system is on the hard drive, and the computer motherboard use it to monitor the status of your hard drive to give you a warning if there is any issue or potential issues. In most of the cases, if the SMART fails, the hard drive will not last very long before the data on it fail completely. Therefore, as the message, SMART status bad backup and replace, suggests, you need to back up the valuable data immediately. 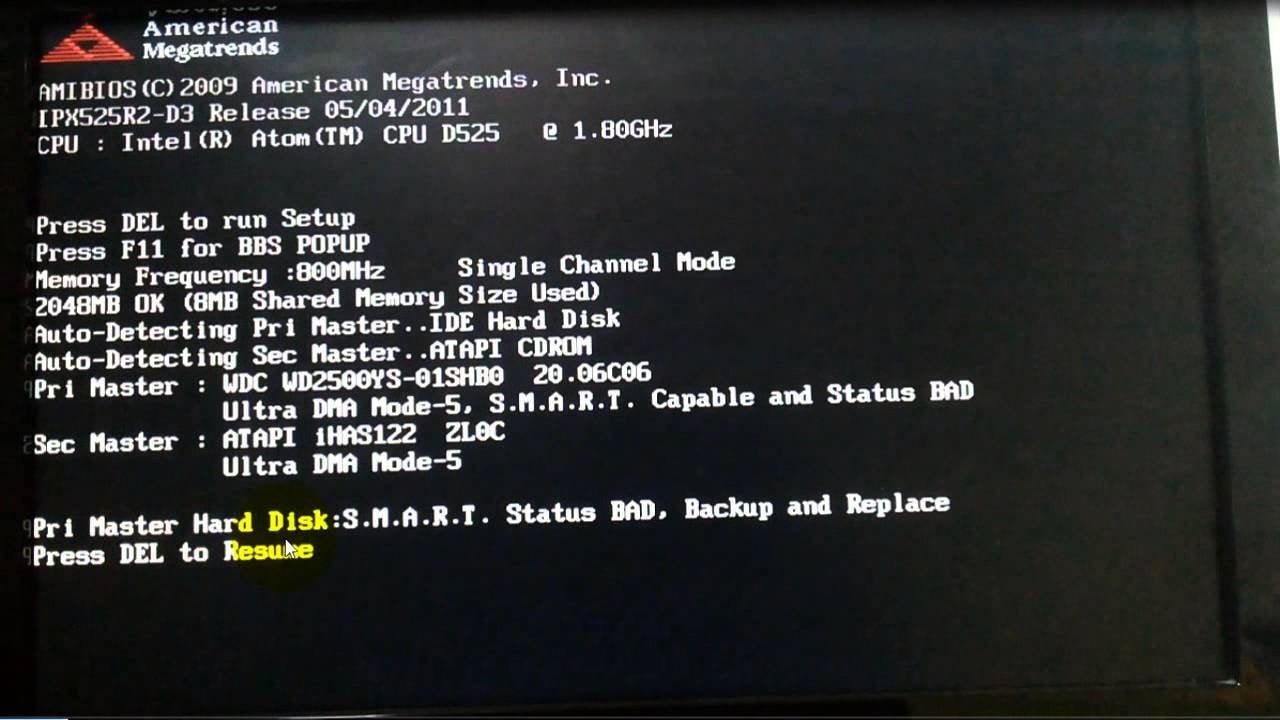 If the error refers to the secondary hard drive, then you can download a backup freeware to backup the drive that is failing. If the primary drive smart status is failing, then you cannot load Windows successfully. Therefore, you need to use a bootable media to boot the computer and get the hard drive backed up. The freeware, AOMEI Backupper Standard is capable of backing hard drive within or without Windows loaded, you can use it to backup Pri or Sec master hard disk with smart status bad problem. You can use AOMEI Backupper to create a bootable media with a USB flash drive or writable DVD. What’s more, you can boot from the AOMEI bootable media created on a random computer.

1. Download and run AOMEI Backupper, or boot from the bootable disk created by AOMEI Backupper. Either way, it will bring you the intuitive interface of this software.

2. At the Home screen, click “Disk Backup” under Backup tab. You can also choose “Partition Backup”, “System Backup” or “File Backup” according to your situation.

3. at the next screen, click on the hard drive to select it as the backup source disk and another drive as destination disk.

In a short while, the backup will be finished. When you install a new hard drive, you can boot the boot disk to restore the backup to the new hard drive. Besides, you can also restore to dissimilar hardware computer when need be. There is no certainty about how long will the hard drive completely fail after you got the SMART status bad error, so backup the data as soon as you can.