How to Mirror the Boot Drive in Windows Server 2016?

Want to create server 2016 mirror boot drive? Refer to this article, you will get two methods to configure disk mirroring for Windows Server 2016.

“I want to mirror the boot drive on an installed Windows Server 2016. But I can’t figure out how to do this? It was simple in 2000+ but now things are different… I can see that you can create a storage space and mirror but how do you do it for the boot partition? Is there any suggestion?”

Why you need to mirror the boot drive in Windows Server 2016?

Before mirror boot disk in Windows Server 2016, you’d better figure out why you need to mirror the boot drive. For most computer users, the common reason of mirroring boot drive are as follows:

1. System migration: Mirror boot drive can migrate the system to a solid state disk (SSD), and the boot speed of the system on the SSD is very fast.

4. System backup: Clone the system to another disk. When the system disk is broken, you can boot the machine from the mirrored drive immediately. When the system crash or the data is lost, users can restore the original system and data using the created image.

5. Rapid bare metal installation: Users can use the image deployment tool to rapidly install multiple computers. It can greatly save the time and cost of installing the system.

How to mirror boot drive in Windows Server 2016?

Puzzled about how to mirror boot drive in Windows Server 2016? Here provides you the detailed steps to solve this problem.

This scenario is based on the assumption that the system and boot files are located on disk 0 and that disk 1 is unallocated space. To do this operation, you need at least two hard-disk drives; IDE, small computer system interface (SCSI), or mixed architecture is permissible. And the second drive must be at least the size of the volume on which the operating system boot and system files reside to permit mirroring.

4. Right-click disk 0 (which contains the boot and system files), and then click “Add Mirror”.

5. A dialog box opens in which any disk on your system that is available for mirroring is displayed. Select the disk of your choice, and then click “Add Mirror”

Both disk 0 and disk 1 will now have the same color code, the same drive letter, and the volumes will have status note “Regenerating” displayed while the information is being copied from the first disk to the second disk. The system will automatically size the volume of the new mirror to the same size as that of the original boot and system volume.

6. If you now want to boot from the new mirrored drive, you have to change the Boot.ini ARC path that points the computer to the partition in which the system files are located.

In addition to using the internal tools of Windows Server 2016 to mirror boot drive, here offers you a simple and effective method to do this operation – mirror the boot drive with powerful third-party software. And it can save much time for you.

Compare with other third-party software, I highly recommend AOMEI Backupper Server which provides you with many powerful features like System Clone. It supports all Windows OS Platforms - Windows Server 2003, 2008, 2011, 2012, 2016, 2019 (including R2), SBS 2003, 2008, 2011 and Windows PC systems. You can use it to mirror the boot drive in Windows Server 2016 easily and effectively. The specific steps are as follows:

Note: If you want to configure disk mirroring for Windows Server 2016, just choose "Disk Clone" to make it.

Step 2. In the next window, choose the destination partition (the C drive and System Reserved Partition are selected by default). 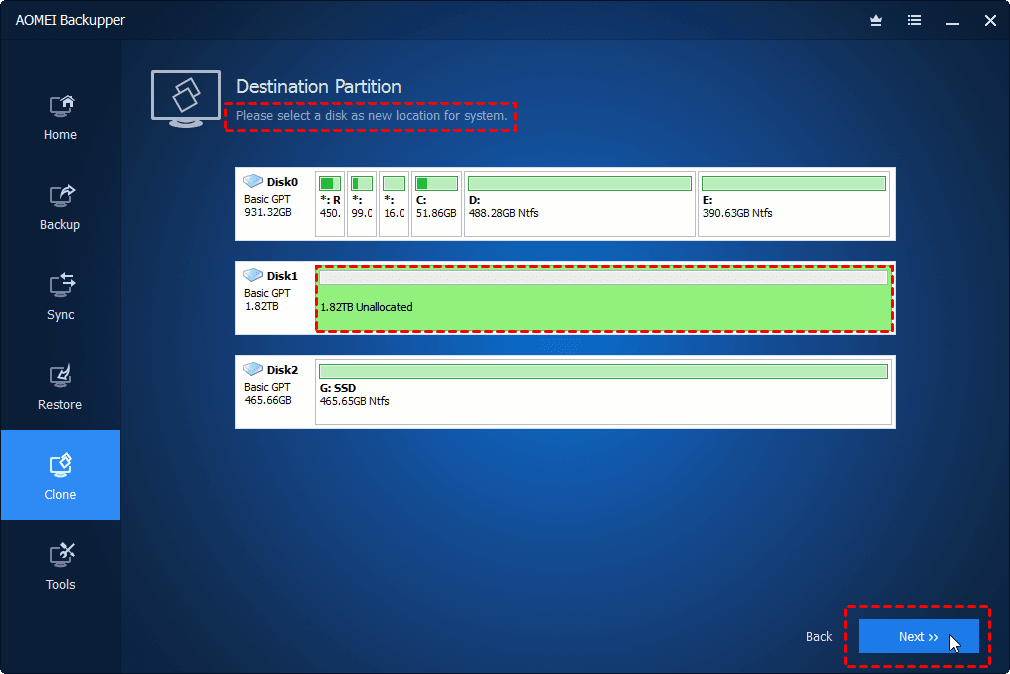 Step 3. If the selected partition has data on it, you will be reminded that the destination partition will be overwritten or deleted. You’d better backup the partition first if the data are important for you. Then, preview the operation summary, and click “Start Clone”.

Tips: If the destination disk is an SSD, here we highly recommend you to tick “SSD Alignment” at the bottom of the window because this feature could improve the speed of reading and writing as well as prolong the service life of SSD. 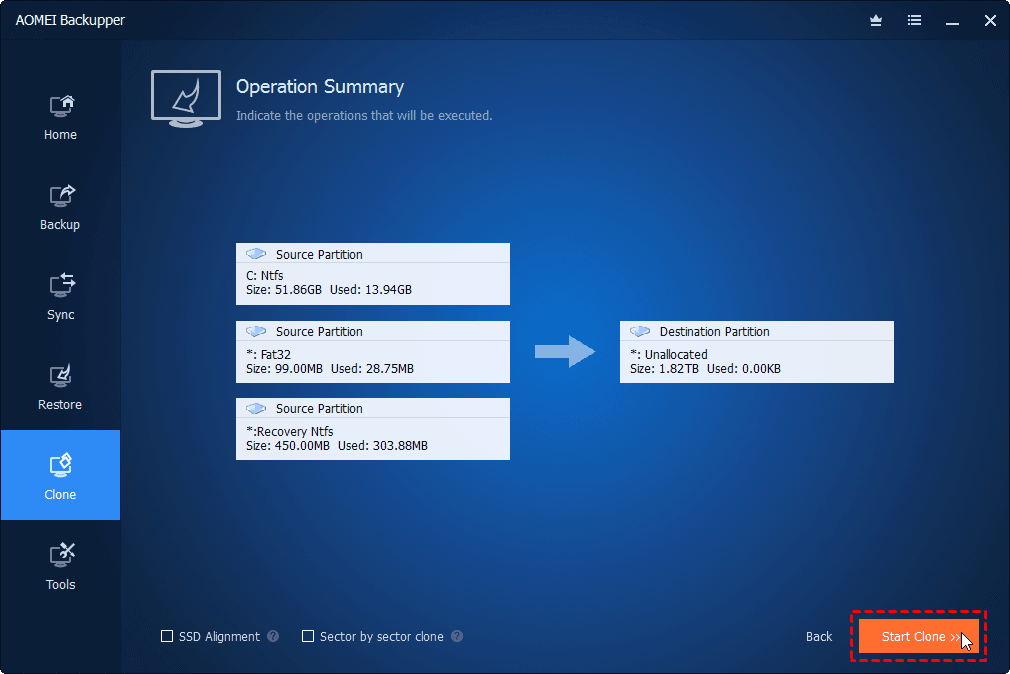 Step 4. At the cloning process interface, you can choose what to do after cloning completes. If you choose "Shut down PC" on completion, you can then remove your old hard drive that contains previous boot drive to test if you can boot from the cloned mirror boot drive. 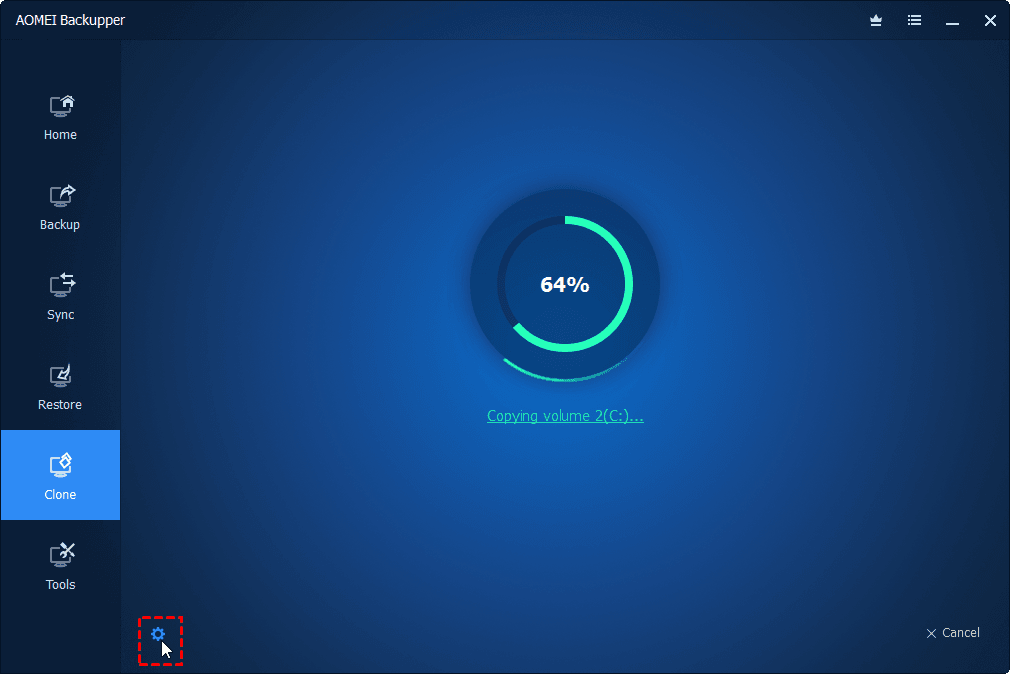 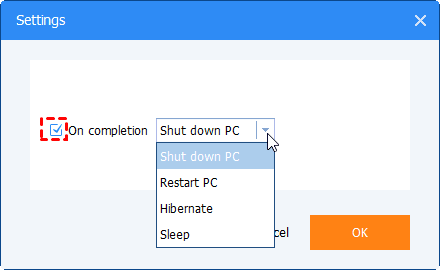 To mirror the boot drive in Windows Server 2016, you can make it with internal tools or AOMEI Backupper. And the latter method is much easier. AOMEI Backupper is such a powerful system clone software. Besides system clone, it also provides you many other powerful functions, such as Install the program on computers in the home and business environments, System Backup, System restore, Disk Clone, Incremental and Differential Backup, Basic Sync and so on.