Be aware of how to create an image of SSD can prevent data loss when your SSD fails. AOMEI Backupper can be the best tool for your manipulation.

SSD is the short for Solid-State Drive or Solid-State Disk. SSD is a drive that uses non-volatile memory as a means of storing and accessing data, much like computer RAM (Random Access Memory). Unlike a hard drive, a SSD has no moving parts, which gives it advantages such as accessing stored information faster, no noise, often move reliable, and consuming less power.

Why create an image of SSD?

Data is not only the core of any financial company customers but also the significant asset for home users. Important data that stores on your SSD - like your critical work documents or personal pictures deserve a great backup strategy to protect unexpected SSD failure. So backup your SSD is a necessity. But how to backup your SSD? A disk image contains the contents of entire disks, including the contents and structure of a disk volume. So create an image of SSD can save all data on your SSD in case of any loss.

How to create an image of SSD easily

To create an image of SSD is to clone your SSD to another hard drive. Which is the best tool for creating an image of SSD? First of all, the tool should have the capability of disk clone. And what customers care much is if the cloned drive is bootable. Besides, its user interface should be intellectual so that even a new user could learn the operation easily.

There is a perfect software - AOMEI Backupper Standard which meets all requirements mentioned above. And it greatly reduces the risk of cloned SSD won't boot issues.

Then let us learn the detail of creating an image of SSD. Download SSD cloning software - AOMEI Backupper Professional, and install it on your computer.

We use an external hard drive as the destination path for instance. So before starting, you need to connect the external SSD to your computer.

Step 3. Select the external hard drive(Disk 2) as the destination path of the image of SSD.

Step 4. After selecting the destination path, you can have a clear confirmation about the operation. If anything is not right, you can back to the wrong place to correct the mistakes. And then, click Start Clone to begin the cloning process. 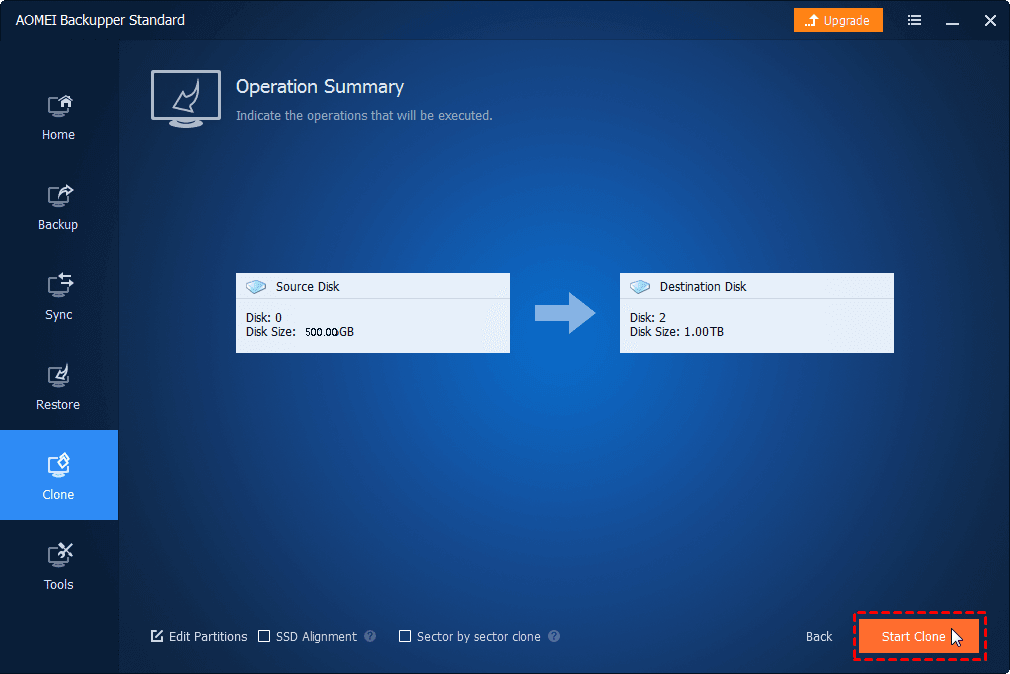 You can easily create an image of SSD disk with the help of a professional disk image software - AOMEI Backupper Professional. The easiest way is to use its Disk Clone feature, you just need to clone SSD to another one, and then,  you can boot from it.

Also,  you can use its Disk Backup feature to create an image of SSD. It requires two storage device, one is to store backup image, the other is to mount backup image. To boot from the new hard drive, you need to restore disk image first. Please refers to clone disk partition with freeware.