If you want to know how to perform HP Omen 30L SSD upgrade, whether you want to keep or replace the original NVMe M.2 SSD, you can get a complete guide in this article. And a reliable disk cloning software is provided to protect your data and system. 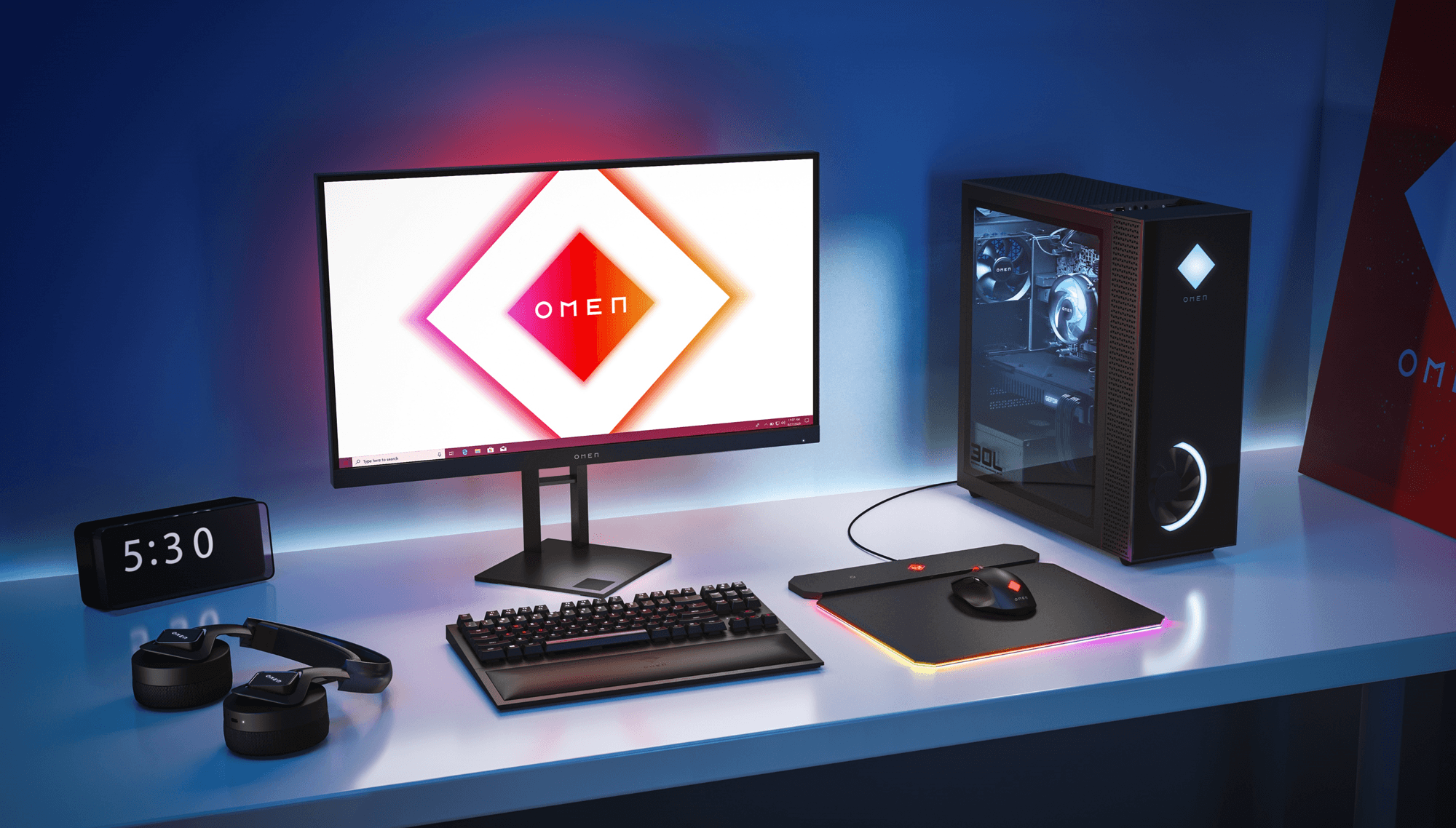 HP Omen 30L is a good-performance gaming desktop, which is deeply loved by users with its powerful functions and quiet performance. It turns on with a gentle whirr, and provides ambient white noise when you're running demanding games. Compared with the jet engine sound of other modern gaming equipment, the Omen 30L has many advantages, even as a daily productivity machine.

What’s more, when you load your favorite games, Omen 30L will render them beautifully, running them at high resolution and smooth frame rates. Equipped with Nvidia 3080 GPU, Intel Core i9 processor and 32 GB RAM, this machine can handle almost everything, from word processing and music to graphic design and video playback, allowing you to fully immerse yourself in demanding single and multiplayer games middle.

“Hello! I just recently received my 1tb Samsung 970 evo m2 to add to my pc in replace of the 256gb that the PC comes with. I thought the PC had 2 available m2 slots but obviously they are both in use. I was wondering if I replaced the current SSD with my new SSD if I needed to buy a USB Windows 10 to reinstall windows. Or does this SSD come with windows. OR is there a better option to upgrade my SSD without getting rid of the current one. Hopefully what I said makes sense and SOMEONE is able to help me. I want to play more games!” 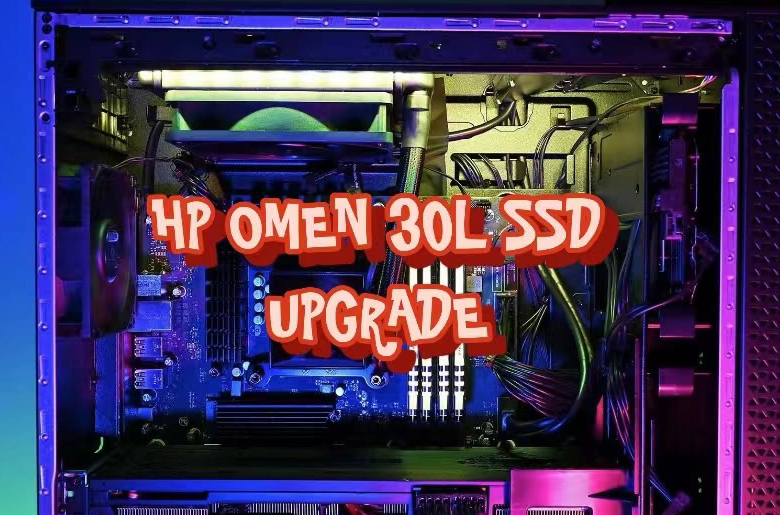 Different models of Omen 30L are available on the HP shop website. They have different specifications and prices. For storage, you have dual storage options, including a PCIe NVMe SSD for the operating system and a SATA hard drive. And there is also an empty M.2 SSD slot and two 2.5’’ bays. Like the users of Omen 30L above, you may encounter situations where you want to upgrade the SSD. So how to perform HP Omen 30L SSD upgrade? If you are interested, please continue reading.

As mentioned above, the boot hard disk of HP OMEN 30L is a PCIe NVMe SSD. NVMe is the abbreviation of non-volatile memory express. It is the fastest SSD on the market with low data latency and can help you speed up your computer. If you install many new applications and games on your computer after using it for a period of time, you will find that there is not enough disk space. At this time, you may want to change to a larger capacity NVMe SSD to get a better gaming experience.

Because the NVMe SSD is the boot drive, you need to use NVMe SSD migration software to help you transfer operating system and data. AOMEI Backupper Professional, which is designed for Windows 11/10/8.1/8/7/Vista/XP, including 32-bit and 64-bit, can help you do this easily.

Its Disk Clone feature supports cloning system disk from GPT to GPT or even cloning MBR to GPT directly. As we all know, booting from NVMe PCIe SSDs is only supported on UEFI-based systems, your NVMe must be partitioned with GPT to support UEFI booting. In addition to the disk cloning function, the software also supports System Clone and Partition Clone.

With the intelligent-sector and partition editing capabilities, you can also clone NVMe SSD to larger drive or smaller drive easily. Before cloning PCIe SSD, you may want to download it on your computer. Read on to learn how to use this powerful software to help you perform HP Omen 30L hard drive upgrade.

If you want to upgrade SSD on HP Omen 30L, you may encounter two situations.

♨ The first situation is that once you experience the high performance of PCIe NVMe SSD, you may not want to switch to another type of SSD. When your NVMe SSD is running low on disk space, you want to replace it with a larger capacity SSD.
♨ The second situation is that your original PCIe NVMe SSD still has a certain amount of space but not much. In order for your computer to run smoothly, you want to add a second SSD to get more storage space to download more games and applications.

Below I will introduce to you in detail how to upgrade HP Omen 30L SSD in two different situations.

Situation 1. Upgrade the Original NVMe M.2 SSD to a Larger One

If you choose to replace the original NVMe M.2 SSD, you need to migrate your system and data before replacing it. The complete operation steps are divided into two parts, please execute them in order.

Preparations:
▶ A new larger PCIe NVMe SSD that your computer support.
▶ An M.2 to PCIe adapter. Because the vacant M.2 SSD slot is not PCIe interface.
▶ Anti-static wrist strap to help reduce the risk of electrostatic damage to the components.
▶ Screwdriver and screws to you fix or remove the hard drive.

Step 1. Turn off the computer and disconnect all power cords. Open the cover of HP Omen 30L. 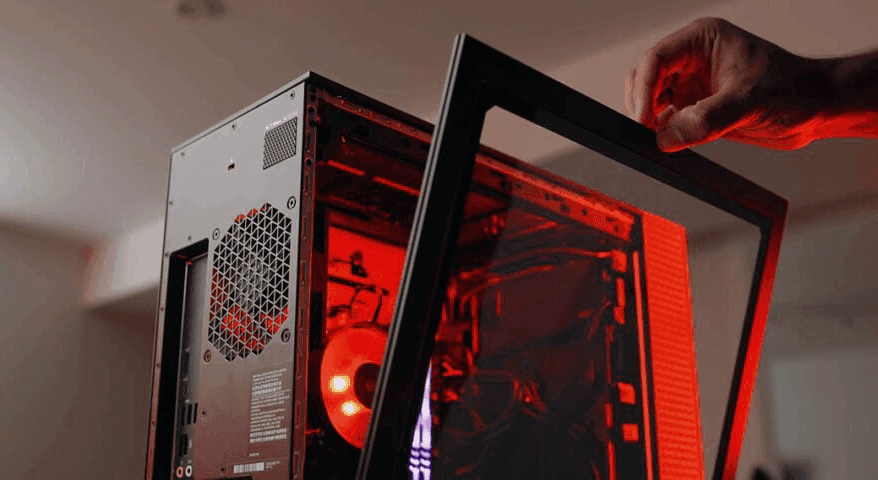 Step 2. Find the location of the second M.2 SSD slot on the motherboard. Connect the larger PCIe NVMe SSD to your computer via M.2 to PCIe adapter. 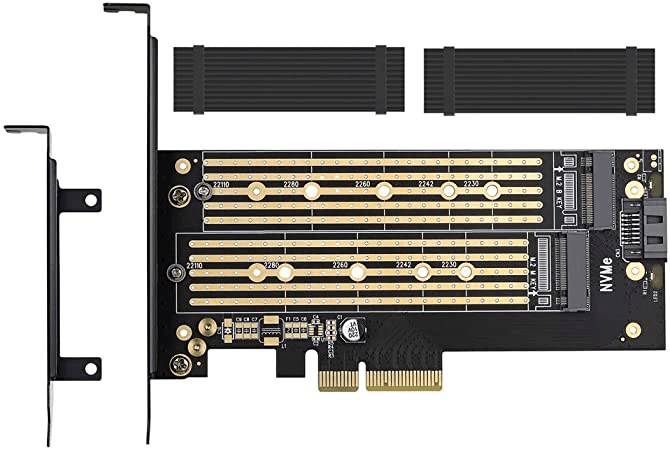 Step 3. Turn on the computer and make sure that the new SSD can be detected. Launch AOMEI Backupper after installing. Click on Clone and then Disk Clone to clone NVMe boot drive.

Step 4. Choose the original NVMe SSD and the target NVMe SSD. Be sure you’ve chosen the right disk, because the target disk will be overwritten.

Other useful clone settings:
✬ Edit Partitions: To make full use of unallocated space left on the target disk. It's mainly used to clone disk to larger disk, regardless of HDD or SSD.
✬ Sector by Sector Clone: To clone all sectors of the original disk to the target drive with larger or same disk space. Please note this feature can make "Edit Partitions" disappear.

Part 2: Install the New PCIe NVMe SSD to boot from it

Step 1. Turn off your computer and replace the original NVMe SSD to the new NVMe SSD. Fix it to the motherboard with a screwdriver. 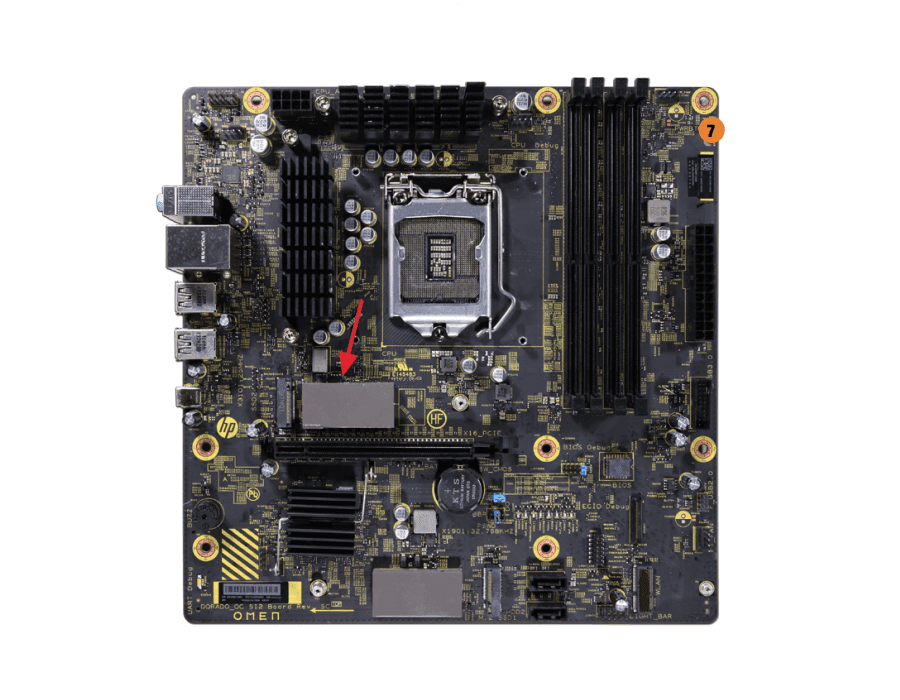 Step 2. Close the cover of HP Omen 30L and restart it. 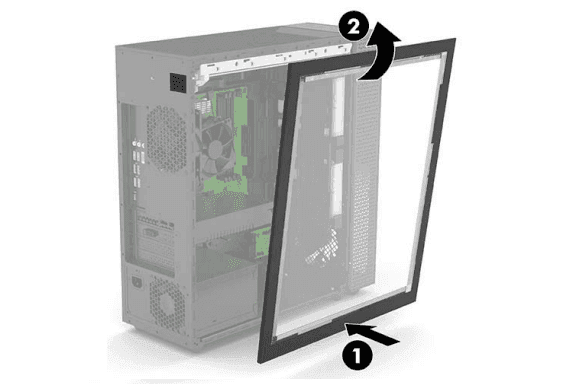 Given that this computer has an empty M.2 SSD slot and two 2.5-inch bays, you can choose to add a new 2.5” SATA SSD or M.2 SATA SSD to perform HP Omen 30L SSD upgrade. Both cases are easy to operate. You can directly add M.2 SATA SSD to the empty slot as mentioned in the first situation, but you don't need to use a M.2 to PCIe adapter. Here, I will show you how to add a 2.5’’ SATA SSD on HP Omen 30L. 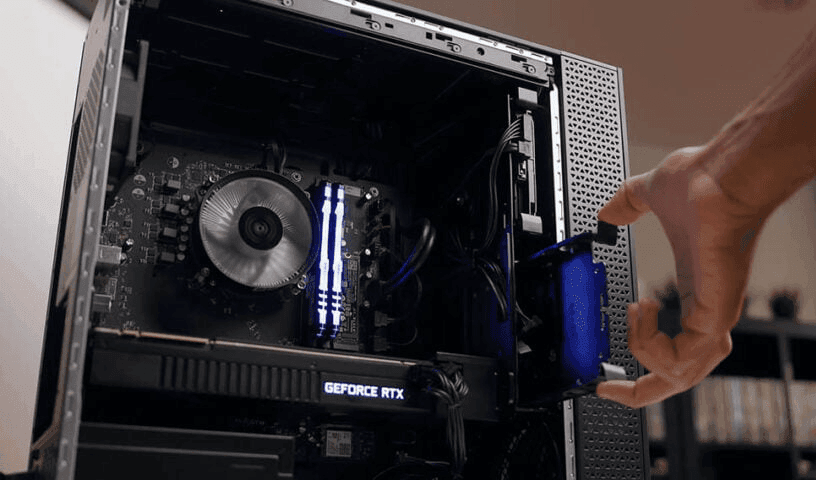 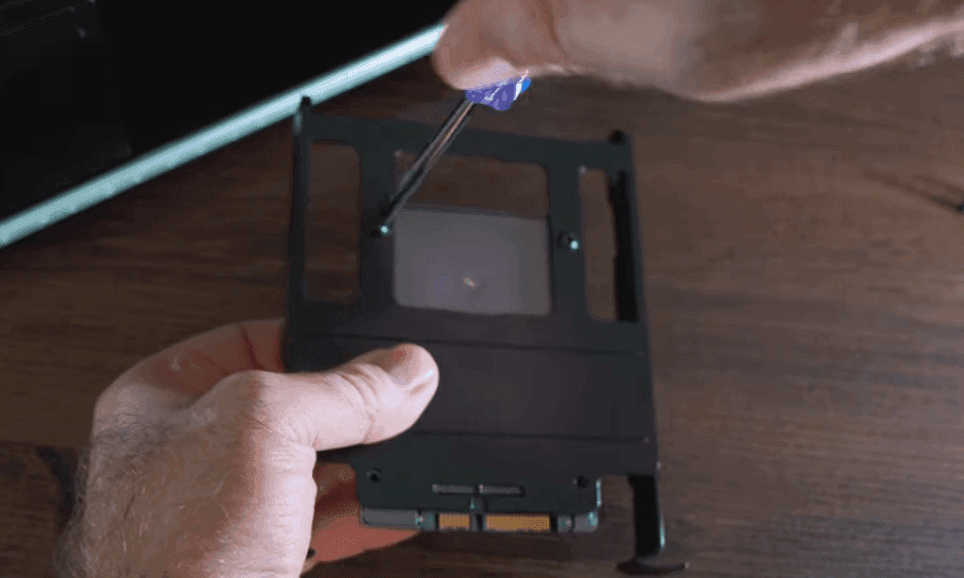 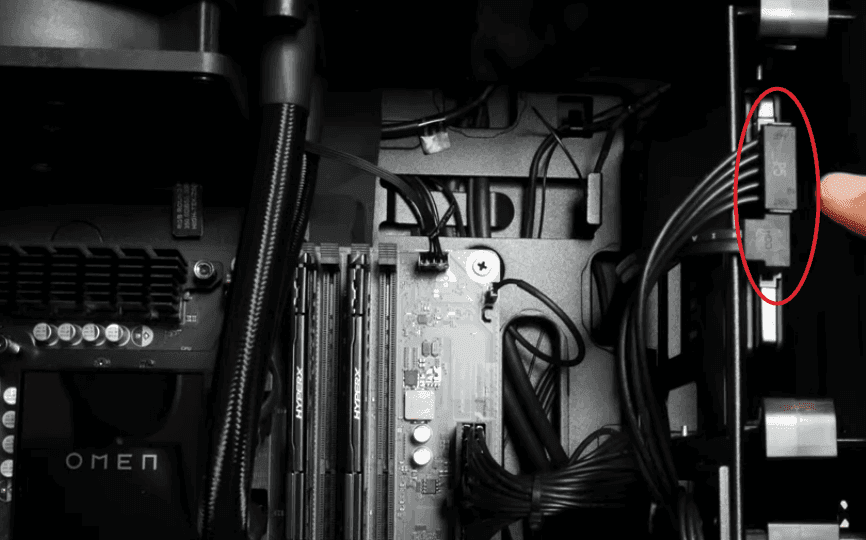 That’s all for HP Omen 30L SSD upgrade. You can achieve this goal by replacing the original NVMe SSD, adding an additional M.2 SSD or 2.5" SATA SSD. In all the processes, AOMEI Backupper will be your right-hand assistant. It can help you migrate your system to a new SSD and ensure that you can safely boot from it. You can also use it to transfer the data on your HDD to the SSD.

If your HP Omen 30L runs well without any problems after replacing the disk for a period of time, you can also use this software to wipe the original SSD for reuse. Try this powerful software now!

You May Also Like
Guide: Asus X505ZA SSD Upgrade-No Data Loss and Boot Issues
How to Clone NVMe to NVMe SSD in Windows 10, 11 (2 Ways)
Guide | Clone NVMe SSD to New One Even with Single Slot